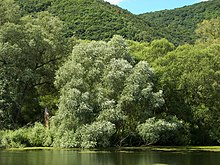 Like all willows, Salix alba is usually to be found in wet or poorly-drained soil at the edge of pools, lakes or rivers. Its wide-spreading roots take up moisture from a large surrounding area.[4]

The wood is tough, strong, and light in weight, but has minimal resistance to decay. The stems (withies) from coppiced and pollarded plants are used for basket-making. Charcoal made from the wood was important for gunpowder manufacture. The bark tannin was used in the past for tanning leather.[1][2] The wood is used to make cricket bats. S. alba wood has a low density and a lower transverse compressive strength. This allows the wood to bend, which is why it can be used to make baskets. Willow bark contains indole-3-butyric acid, which is a plant hormone stimulating root growth; willow trimmings are sometimes used to clone rootstock in place of commercially synthesized root stimulator.[11] It is also used for ritual purposes by Jews on the holiday of Sukkot.[12]

Hippocrates, Galen, Pliny the Elder and others believed willow bark could ease aches and pains and reduce fevers.[13] It has long been used in Europe and China for the attempted treatment of these conditions.[14] This remedy is also mentioned in texts from ancient Egypt, Sumer, and Assyria.[15] The first "clinical trial" was reported by Reverend Edward Stone, a vicar from Chipping Norton in Oxfordshire, England, in 1763 with a successful treatment of malarial fever with the willow bark.[13][16] The bark is often macerated in ethanol to produce a tincture.