Beverage made from infusing or decocting plant material in hot water 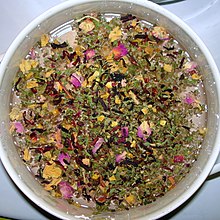 Herbal tea made from rose petals beginning to steep

Herbal teas—less commonly[1] called tisanes (UK and US /tɪˈzæn/, US also /tɪˈzɑːn/)[2]—are beverages made from the infusion or decoction of herbs, spices, or other plant material in hot water. The term "herbal tea" is often used in contrast to true teas (e.g., black, green, white, yellow, oolong), which are prepared from the cured leaves of the tea plant, Camellia sinensis. Unlike coffee and true teas (which are also available decaffeinated), most tisanes do not naturally contain caffeine.[3][4]

Camellia sinesis, the tea plant, has been grown for around 2100 years.[5] The plant is a member of the family Theaceae, its origins dating back to China and Southeast Asia.[5] The habitual consumption of tea grew in Asia, and eventually European explorers brought it to Europe in the 17th century when it became a cultural staple.[citation needed] 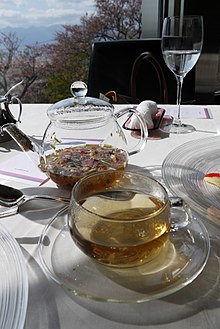 Herbal tea in a glass teapot and cup

Some feel that the term tisane is more correct than herbal tea or that the latter is even misleading, but most dictionaries record that the word tea is also used to refer to other plants beside the tea plant and to beverages made from these other plants.[6][7] In any case, the term herbal tea is very well established and much more common than tisane.[1]

The word tisane was rare in its modern sense before the 20th century, when it was borrowed in the modern sense from French. (This is why some people feel it should be pronounced /tɪˈzɑːn/ as in French, but the original English pronunciation /tɪˈzæn/ continues to be more common in US English and especially in UK English).[2]

The word had already existed in late Middle English in the sense of "medicinal drink" and had already been borrowed from French (Old French). The Old French word came from the Latin word ptisana, which came from the Ancient Greek word πτισάνη (ptisánē), which meant "peeled" barley, in other words pearl barley, and a drink made from this that is similar to modern barley water.[8]

While most herbal teas are safe for regular consumption, some herbs have toxic or allergenic effects. Among the greatest causes of concern are:

Herbal teas can also have different effects from person to person, and this is further compounded by the problem of potential misidentification. The deadly foxglove, for example, can be mistaken for the much more benign (but still relatively toxic to the liver) comfrey.

The US does not require herbal teas to have any evidence concerning their efficacy, but does treat them technically as food products and require that they be safe for consumption.

Fruit or fruit-flavored tea is usually acidic and thus may contribute to erosion of tooth enamel.[11]

Depending on the source of the herbal ingredients, herbal teas, like any crop, may be contaminated with pesticides or heavy metals.[12][13] According to Naithani & Kakkar (2004), "all herbal preparations should be checked for toxic chemical residues to allay consumer fears of exposure to known neuro-toxicant pesticides and to aid in promoting global acceptance of these products".[12]

In addition to the issues mentioned above which are toxic to all people, several medicinal herbs are considered abortifacients, and if consumed by a pregnant individual could cause miscarriage. These include common ingredients like nutmeg, mace, papaya, bitter melon, verbena, saffron, slippery elm, and possibly pomegranate. It also includes more obscure herbs, like mugwort, rue, pennyroyal, wild carrot, blue cohosh, tansy, and savin.[medical citation needed]

Herbal teas can be made with fresh or dried flowers, fruit, leaves, seeds or roots. They are made by pouring boiling water over the plant parts and letting them steep for a few minutes. The herbal tea is then strained, sweetened if desired, and served. Many companies produce herbal tea bags for such infusions.

While varieties of tisanes can be made from any edible plant material, below is a list of those commonly used for such: