A cannabis edible, also known as a cannabis-infused food or simply an edible, is a food product that contains cannabinoids, especially tetrahydrocannabinol (THC).[1] Although edible may refer to either a food or a drink, a cannabis-infused drink may be referred to more specifically as a liquid edible or drinkable.

Most edibles contain a significant amount of THC, which can induce a wide range of effects, including relaxation, euphoria, increased appetite, fatigue, and anxiety.[2] THC-dominant edibles are consumed for recreational and medical purposes.[3] Some edibles contain a negligible amount of THC and are instead dominant in other cannabinoids, most commonly cannabidiol (CBD).[4] These edibles are primarily used for medical purposes only.[4]

Foods and beverages made from non-psychoactive cannabis products are known as hemp foods.[5]

The earliest recorded cannabis-infused food was in the Indian subcontinent, where people have prepared food and drink with bhang for millennia, for both spiritual and medicinal purposes.[8] The oil-solubility of cannabis extracts was also known to ancient Indians, with Sanskrit recipes requiring cannabis to be sautéed in ghee before mixing it with other ingredients.[9]:7[10]

Bhang has been used in food and drink as early as 1,000 BC by Hindus in the Indian subcontinent.[11] Bhang is traditionally distributed during the Hindu spring festival of Holi.[12][13]

Modern interest in cannabis-infused food is credited to the publication of The Alice B. Toklas Cook Book. Toklas included a recipe for "haschich fudge", which was contributed by artist and friend Brion Gysin when the book was published in 1954. Although it was omitted from the first American editions, Toklas' name and her "brownies" became synonymous with cannabis in the growing 1960s counterculture.[14]

In some U.S. states that have legalized cannabis, edibles have experienced a dramatic rise in sales.[15] However, there is growing concern about the danger edibles pose to children and inexperienced cannabis consumers,[16] who may easily ingest too much at once, possibly not even realizing the food has been infused.[17][18] Furthermore, calls to poison control have dramatically increased since 2008 due to dogs ingesting edibles.[19] In Canada, cannabis-infused food products were legalized in October 2019, but regulatory restrictions and reduced consumer interest may inhibit innovation.[20]

Cannabis does not naturally contain significant amounts of THC. Rather, it contains high levels of tetrahydrocannabinolic acid (THCA), which converts into THC through decarboxylation, a process induced by heating.[21]

Comparing effects of eating cannabis products and smoking them is difficult because there are large margins of error due to variability in how different people smoke, with the number, duration, and spacing of puffs, the hold time and the volume of the person's lungs all affecting the dosing. With regard to eating, different vehicles in which cannabinoids are dissolved for oral intake affect the availability of the cannabinoids, and different people metabolize differently.[22] Generally, however, because oral doses are processed by the digestive system and the liver before entering the bloodstream, cannabinoids that are ingested are absorbed more slowly and have delayed and lower peak concentrations, and are cleared more slowly, compared to inhaling them in the aerosol that is formed when cannabis is burnt.[22] Oral administration generally leads to two peaks of concentration, due to enterohepatic circulation.[22]

Consuming THC through ingestion results in absorption through the liver and, through metabolic processes, the conversion of a significant proportion of it into 11-Hydroxy-THC.[22]

A variety of space cakes from Amsterdam, Netherlands. 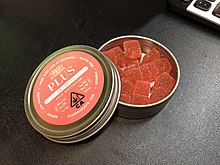 A cannabis-infused baked good is a common type of cannabis edible, which may include hash cookies, brownies, and "space cakes" (image). One may not be able to distinguish between regular baked goods and those containing cannabinoids which tend to have a slightly green tinge and often emit a faint cannabis smell. A mild grassy or cannabis flavor might be detectable if sufficient cannabis quantities are used.[9]:7

A cannabis-infused drink, also known as a liquid edible or drinkable, is a drink that contains cannabinoids, especially THC.

Traditional cannabis-infused drinks such as lassi and thandai, when prepared with bhang, originate from the Indian subcontinent.

In U.S. states that have legalized cannabis for recreational use, drinks were about 4% of the cannabis market in 2014 but had fallen to around 1.5% of the market in 2016.[23][24] Cannabis infused drinks can come in the form of sodas, teas, brews, and many more.

A capsule containing THC or CBD that is not sold as a regulated pharmaceutical is also considered an edible and provides the same effect as food and drink.[25]

Cannabis tincture is an extract of cannabis contained in oil at room temperature. Generally, stems and leaves of the cannabis plant are used as source material because they contain high amounts of cannabinoids and are undesirable to smoke.[citation needed] When infused in high-proof grain-based alcohol, such as Everclear, the tincture becomes what is commonly known as green dragon. Creme de Gras (a play on the English "grass", as creme de gras translates literally as "cream of fat") is a flavored liqueur made from cannabis.[9]:31 It can be added to coffee and other beverages.

Cannabis oil is a product based in cooking oil that has been infused with cannabinoids by mixing cannabis with the heated oil. Cannabis cooking oils are available to medical cannabis patients in a variety of blends for various cooking applications.[26]

Cannabis-infused butter, or cannabutter, is a cannabis-infused product used for flavoring cannabis edibles.[27] Cleaned and dried buds are steeped in melted butter or oil in preparation for consumption.[27]