Not to be confused with Aconitase.
Toxic plant alkaloid

Biologically active isolates from Aconitum and Delphinium plants are classified as norditerpenoid alkaloids,[3] which are further subdivided based on the presence or absence of the C18 carbon.[4] Aconitine is a C19-norditerpenoid, based on its presence of this C18 carbon. It is barely soluble in water, but very soluble in organic solvents such as chloroform or diethyl ether.[5][6] Aconitine is also soluble in mixtures of alcohol and water if the concentration of alcohol is high enough.

Aconitine binds to the channel at the neurotoxin binding site 2 on the alpha-subunit.[11] This binding results in a sodium-ion channel that stays open longer. Aconitine suppresses the conformational change in the sodium-ion channel from the active state to the inactive state. The membrane stays depolarized due to the constant sodium influx (which is 10–1000 fold greater than the potassium efflux). As a result, the membrane cannot be repolarized. The binding of aconitine to the channel also leads to the channel to change conformation from the inactive state to the active state at a more negative voltage.[12] In neurons, aconitine increases the permeability of the membrane for sodium ions, resulting in a huge sodium influx in the axon terminal. As a result, the membrane depolarizes rapidly. Due to the strong depolarization, the permeability of the membrane for potassium ions increases fast, resulting in a potassium reflux to release the positive charge out of the cell. Not only the permeability for potassium ions but also the permeability for calcium ions increases as a result of the depolarization of the membrane. A calcium influx takes place. The increase of the calcium concentration in the cell stimulates the release of the neurotransmitter acetylcholine into the synaptic cleft. Acetylcholine binds to acetylcholine receptors at the postsynaptic membrane to open the sodium-channels there, generating a new action potential. 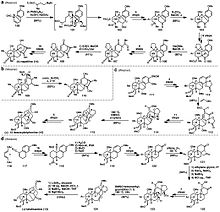 More recently, the laboratory of the late David Y. Gin completed the total syntheses of the aconitine alkaloids nominine[19] and neofinaconitine.[20] 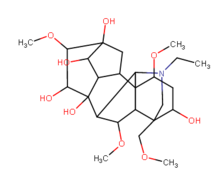 Consuming as little as 2 milligrams of pure aconite or 1 gram of the plant itself may cause death by paralyzing respiratory or heart functions.[23] Toxicity may occur through the skin; even touching the flowers can numb finger tips.[23]

The toxic effects of aconitine have been tested in a variety of animals, including mammals (dog, cat, guinea pig, mouse, rat and rabbit), frogs and pigeons. Depending on the route of exposure, the observed toxic effects were: local anesthetic effect, diarrhea, convulsions, arrhythmias or death.[23][24] According to a review of different reports of aconite poisoning in humans, the following clinical features were observed:[2]

Progression of symptoms: the first symptoms of aconitine poisoning appear approximately 20 minutes to 2 hours after oral intake and include paraesthesia, sweating and nausea. This leads to severe vomiting, colicky diarrhea, intense pain and then paralysis of the skeletal muscles. Following the onset of life-threatening arrhythmia, including ventricular tachycardia and ventricular fibrillation, death finally occurs as a result of respiratory paralysis or cardiac arrest.[25]

For the analysis of the Aconitum alkaloids in biological specimens such as blood, serum and urine, several GC-MS methods have been described. These employ a variety of extraction procedures followed by derivatisation to their trimethylsilyl derivatives. New sensitive HPLC-MS methods have been developed as well, usually preceded by SPE purification of the sample.[25] The antiarrhythmic drug lidocaine has been reported to be an effective treatment of aconitine poisoning of a patient. Considering the fact that aconitine acts as an agonist of the sodium channel receptor, antiarrhythmic agents which block the sodium channel (Vaughan-Williams' classification I) might be the first choice for the therapy of aconitine induced arrhythmias.[26] Animal experiments have shown that the mortality of aconitine is lowered by tetrodotoxin. The toxic effects of aconitine were attenuated by tetrodotoxin, probably due to their mutual antagonistic effect on excitable membranes.[27] Also paeoniflorin seems to have a detoxifying effect on the acute toxicity of aconitine in test animals. This may result from alternations of pharmacokinetic behavior of aconitine in the animals due to the pharmacokinetic interaction between aconitine and paeoniflorin.[28] In addition, in emergencies, one can wash the stomach using either tannic acid or powdered charcoal. Heart stimulants such as strong coffee or caffeine may also help until professional help is available.[29]

During the Indian Rebellion of 1857, a British detachment was the target of attempted poisoning with aconitine by the Indian regimental cooks. The plot was thwarted by John Nicholson who, having detected the plot, interrupted the British officers just as they were about to consume the poisoned meal. The chefs refused to taste their own preparation, whereupon it was force -fed to a monkey who "expired on the spot". The cooks were hanged.

Aconitine was the poison used by George Henry Lamson in 1881 to murder his brother-in-law in order to secure an inheritance. Lamson had learned about aconitine as a medical student from professor Robert Christison, who had taught that it was undetectable—but forensic science had improved since Lamson's student days.[30][31][32]

In 1953 aconitine was used by a Soviet biochemist and poison developer, Grigory Mairanovsky, in experiments with prisoners in the secret NKVD laboratory in Moscow. He admitted killing around 10 people using the poison.[33]

In 2009 Lakhvir Singh of Feltham, west London, used aconitine to poison the food of her ex-lover Lakhvinder Cheema (who died as a result of the poisoning) and his current fiancée Aunkar Singh. Singh received a life sentence with a 23-year minimum for the murder on February 10, 2010.[34]

Aconitine was also made famous by its use in Oscar Wilde's 1891 story "Lord Arthur Savile's Crime". Aconite also plays a prominent role in James Joyce's Ulysses, in which the father to protagonist Leopold Bloom used pastilles of the chemical to commit suicide. Aconitine poisoning plays a key role in the murder mystery Breakdown by Jonathan Kellerman (2016). In Twin Peaks (season 3) Part 13, aconitine is suggested to poison the main character.[36]