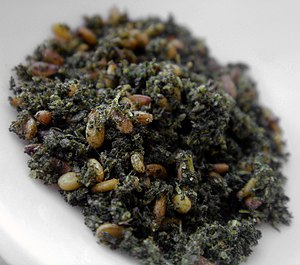 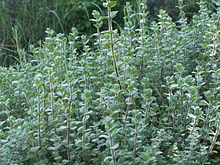 Za'atar[1] (Arabic: زَعْتَر‎, IPA: [ˈzaʕtar]) is a culinary herb or family of herbs. It is also the name of a spice mixture that includes the herb along with toasted sesame seeds, dried sumac, often salt, as well as other spices.[2] As a family of related Middle Eastern herbs, it contains plants from the genera Origanum (oregano), Calamintha (basil thyme), Thymus (typically Thymus vulgaris, i.e., thyme), and Satureja (savory) plants.[3] The name za'atar alone most properly applies to Origanum syriacum, considered in biblical scholarship to be the hyssop (Hebrew: אזוב‎ [eˈzov]) of the Hebrew Bible.[4] Used in Levantine cuisine, both the herb and spice mixture are popular throughout the Mediterranean region of the Middle East.[5][6] 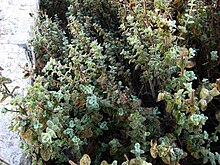 Thymus capitatus (also called Satureja capitata) is a species of wild thyme found throughout the hills of the Levant and Mediterranean Middle East.[10] Thyme is said to be a plant "powerfully associated with Palestine", and the spice mixture za'atar is common fare there.[11] Thymbra spicata, a plant native to Greece and to Palestine/Israel and has been cultivated in North America by Syrian, Palestinian, and Lebanese immigrants for use in their za'atar preparations since the 1940s.[12] 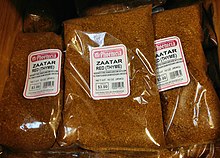 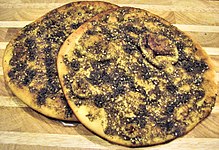 Za'atar is traditionally dried in the sun and mixed with salt, sesame seeds and sumac.[35] It is commonly eaten with pita, which is dipped in olive oil and then za'atar.[35] When the dried herb is moistened with olive oil, the spread is known as za'atar-wu-zayt or zeit ou za'atar (zeit or zayt, meaning "oil" in Arabic and "olive" in Hebrew).[19] This mixture spread on a dough base and baked as a bread, produces manakeesh bi zaatar.[37] In the Mediterranean region of Middle East, ka'ak (a soft sesame seed bread), is sold in bakeries and by street vendors with za'atar to dip into or with a za'atar filling.[38][39][40]

Maimonides (Rambam), a medieval rabbi and physician who lived in Spain, Morocco, and Egypt, prescribed za'atar for its health advancing properties in the 12th century.[44][45] Since ancient times, people in the Mediterranean region of Middle East have thought za'atar could be used to reduce and eliminate internal parasites.[citation needed]