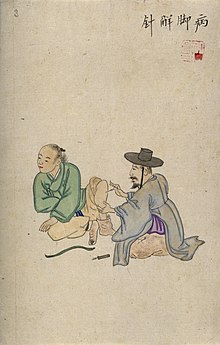 A Korean acupuncturist inserting a needle into the leg of a male patient. Wellcome Collection

Korean medicine traditions originated in ancient and prehistoric times and can be traced back as far as 3000 B.C. when stone and bone needles were found in North Hamgyong Province, in present-day North Korea.[3][4] In Gojoseon, where the founding myth of Korea is recorded, there is a story of a tiger and a bear who wanted to reincarnate in human form and who ate wormwood and garlic. In Jewang Ungi (제왕운기), which was written around the time of Samguk Yusa, wormwood and garlic are described as 'edible medicine', showing that, even in times when incantatory medicine was the mainstream, medicinal herbs were given as curatives in Korea. Medicinal herbs at this time were used as remedial treatment such as easing the pain or tending injury, along with knowing what foods were good for health. Moreover, wormwood and garlic are not found in ancient Chinese herbology, showing that traditional Korean medicine developed unique practices and inherited them from other cultures.

In the period of the Three Kingdoms, traditional Korean medicine was mainly influenced by other traditional medicines such as ancient Chinese medicine. In the Goryeo dynasty, a more intense investigation of domestic herbs took place: The result was the publication of numerous books on domestic herbs. Medical theories at this time were based on the medicine of Song dynasty, but prescriptions were based on the medicine of the Unified Silla period such as the medical text First Aid Prescriptions Using Native Ingredients or Hyangyak Gugeupbang (향약구급방), which was published in 1236. Other medical journals were published during this period like Introductory Guide to Medicine for the General Public or Jejungiphyobang (제중입효방).

Medicine flourished in the period of the Joseon. For example, the first training system of nurses was instituted under King Taejong (1400-1418), while under the reign of King Sejong the Great (1418-1450) measures were adopted to promote the development of a variety of Korean medicinal ingredients.[5] These efforts were systematized and published in the Hyangyak Jipseongbang (향약집성방, 1433), which was completed and included 703 Korean native medicines, providing an impetus to break away from dependence on Chinese medicine.[6] The medical encyclopaedia named Classified Collection of Medical Prescriptions (醫方類聚, 의방유취), which included many classics from traditional chinese medicine, written by Kim Ye-mong (金禮蒙, 김예몽) and other Korean official doctors from 1443 to 1445, was regarded as one of the greatest medical texts of the 15th century.[6] It included more than 50,000 prescriptions and incorporated 153 different Korean and Chinese texts,[6] including the Concise Prescriptions of Royal Doctors (御醫撮要方, 어의촬요방) which was written by Choi Chong-jun (崔宗峻, 최종준) in 1226. Classified Collection of Medical Prescriptions has very important research value, because it keeps the contents of many ancient Korean and Chinese medical books that had been lost for a long time.[7]

After this, many books on medical specialties were published. There are three physicians from the Joseon Dynasty (1392-1910) who are generally credited with further development of traditional Korean medicine—Heo Jun, Saam, and Lee Je-ma. After the Japanese invasion in 1592, Dongeui Bogam (동의보감) was written by Heo Jun, the first of the major physicians. This work further integrated the Korean and Chinese medicine of its time and was influential to Chinese, Japanese and Vietnamese medicine.

The next major influence to traditional Korean medicine is related to Sasang typology (사상의학). Lee Je-ma and his book, The Principal of Life Preservation in Oriental Medicine (東醫壽世保元, 동의수세보원) systematically theorized with the influence of Korean Confucianism and his clinical experiences in Korea. Lee Je-ma said that even if patients suffer the same illness, patients need to use different herbal applications to treat the same illness due to the pathophysiologies of individuals. He stresses that the health of human body had a close relationship with the state of mind. He believed that the human mind and body were not separate and they closely reflected each other, and the aspect of mind needed to be considered when examining the causes of disease. Thus, not only food and natural environment but also emotional changes in humans can be another major reason for illness. He believed that medical diagnosis and treatment should be based on person's typology rather than on symptoms alone and each person should be given different prescriptions depending on the constitution of the individual.[8] Sasang typology (사상의학) focuses on the individual patients based on different reactions to disease and herbs. Treat illness by the treatment of the root cause through proper diagnosis. Key to this diagnosis is to first determine the internal organs or pathophysiology of each patient.[9]

The next recognized individual is Saam, a priest-physician who is believed to have lived during the 16th century. Although there is much unknown about Saam, including his real name and date of birth, it is recorded that he studied under the famous monk Samyang. He developed a system of acupuncture that employs the five element theory.

In the late Joseon dynasty, positivism was widespread. Clinical evidence was used more commonly as the basis for studying disease and developing cures. Scholars who had turned away from politics devoted themselves to treating diseases and, in consequence, new schools of traditional medicine were established. Simple books on medicine for the common people were published.

Lee Je-ma classified human beings into four main types, based on the emotion that dominated their personality and developed treatments for each type:

Herbalism is the study and practice of using plant material for the purpose of food, medicine, or health. They may be flowers, plants, shrubs, trees, moss, lichen, fern, algae, seaweed or fungus. The plant may be used in its entirety or with only specific parts. In each culture or medical system there are different types of herbal practitioners: professional and lay herbalists, plant gatherers, and medicine makers.[citation needed]

Herbal medicines may be presented in many forms including fresh, dried, whole, or chopped. Herbs may be prepared as infusions when an herb is soaked in a liquid or decocted—simmered in water over low heat for a certain period. Some examples of infusion are chamomile or peppermint, using flowers, leaves and powdered herbs. Decocting examples may be rose hips, cinnamon bark, and licorice root consisting of fruits, seeds, barks, and roots. Fresh and dried herbs can be tinctured where herbs are kept in alcohol or contained in a vinegar extract. They can be preserved as syrups such as glycerites in vegetable glycerin or put in honey known as miels. Powdered and freeze dried herbs can be found in bulk, tablets, troches similar to a lozenge, pastes, and capsules.[citation needed]

Many herbalists consider the patient's direct involvement to be critical. These methods are delivered differently depending on the herbal traditions of each area. Nature is not necessarily safe; special attention should be used when grading quality, deciding a dosage, realizing possible effects, and any interactions with herbal medications.[10]

An example of herbal medicine is the use of medicinal mushrooms as a food and as a tea. A notable mushroom used in traditional Korean medicine is Phellinus linteus known as Song-gen.

Acupuncture is used to withdraw blood or stimulate certain points on humans and animals by inserting them on specific pressure points of the body. Traditional acupuncture involves the belief that a "life force" (qi) circulates within the body in lines called meridians.[11] Scientific investigation has not found any histological or physiological evidence for traditional Chinese concepts such as qi, meridians, and acupuncture points,[n 2][16] and many modern practitioners no longer support the existence of life force energy (qi) flowing through meridians, which was a major part of early belief systems.[17][18][19][20] Pressure points can be stimulated through a mixture of methods ranging from the insertion and withdrawal of very small needles to the use of heat, known as moxibustion. Pressure points can also be stimulated by laser, massage, and electrical means.[21]:234

Moxibustion is a technique in which heat is applied to the body with a stick or a cone of burning mugwort. The tool is placed over the affected area without burning the skin. The cone or stick can also be placed over a pressure point to stimulate and strengthen the blood.[22]

A Cochrane Review found limited evidence for the use of moxibustion in correcting breech presentation of babies, and called for more experimental trials.[23] Moxibustion has also been studied for the treatment of pain,[24] cancer,[25] stroke,[26] ulcerative colitis,[27] constipation,[28] and hypertension.[29] Systematic reviews have found that these studies are of low quality and positive findings could be due to publication bias.[30]

The South Korean government established a national school of traditional Korean medicine to establish its national treasure on a solid basis after the closing of the first modern educational facility (Dong-Je medical school) one hundred years ago by the Japanese invasion.

In 2008, the School of Korean Medicine was established inside Pusan National University with the 50 undergraduate students on the Yangsan medical campus. The new affiliated Korean Medical Hospital and Research Center for Clinical Studies are under construction.

Koryo medicine is a form of traditional medicine used in North Korea and promoted by the North Korean government, providing half of the reported healthcare in the country.[31] It is largely practised in the General Hospital of Koryo Medicine, Pyongyang.[32] Examples of Koryo medicine sold commercially are Kumdang-2 and Royal Blood-Fresh, both of which are popular with Chinese tourists to North Korea.[33]