Skip to content
Species of flowering plant
For other uses, see Oregano (disambiguation).

Oregano (US: /ɔːˈrɛɡənoʊ, ə-/,[1] UK: /ˌɒrɪˈɡɑːnoʊ/;[2] Origanum vulgare) is a species of flowering plant in the mint family Lamiaceae. It was native to the Mediterranean region, but widely naturalised elsewhere in the temperate Northern Hemisphere.

Oregano is a woody perennial plant, growing 20–80 cm (8–31 in) tall, with opposite leaves 1–4 cm (1⁄2–1+1⁄2 in) long. The flowers are purple, 3–4 mm (1⁄8–3⁄16 in) long, produced in erect spikes in summer. It is sometimes called wild marjoram, and its close relative, O. majorana, is known as sweet marjoram. Both are very widely used as culinary herbs, especially in Italian and French cuisine. Oregano is also an ornamental plant, with numerous cultivars bred for varying leaf colour, flower colour and habit.

Used since the middle 18th century, the Spanish word oregano is derived from the Latin orīganum and ultimately from the Classical Greek ὀρίγανον (orī́ganon).[3] This is a compound Greek term that consists of ὄρος (óros) meaning "mountain", and γάνος (gános) meaning "brightness", thus, "brightness of the mountain".[3]

Oregano is related to the herb marjoram, sometimes being referred to as wild marjoram. It has purple flowers and spade-shaped, olive-green leaves. It is a perennial,[4][5] although it is grown as an annual in colder climates, as it often does not survive the winter.[6][7] Oregano is planted in early spring, the plants being spaced 30 cm (12 in) apart in fairly dry soil, with full sun. It will grow in a pH range between 6.0 (mildly acidic) and 9.0 (strongly alkaline), with a preferred range between 6.0 and 8.0. It prefers a hot, relatively dry climate, but does well in other environments.[8] 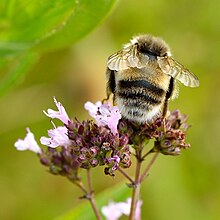 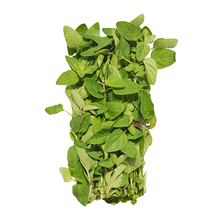 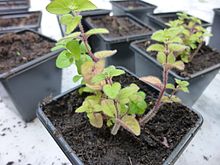 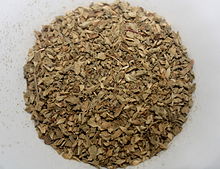 Oregano is a culinary herb, used for the flavour of its leaves, which can be more intense when dried than fresh. It has an earthy, warm, and slightly bitter taste, which can vary in intensity. Good-quality oregano may be strong enough almost to numb the tongue, but cultivars adapted to colder climates may have a lesser flavour. Factors such as climate, season, and soil composition may affect the aromatic oils present, and this effect may be greater than the differences between the various species of plants. Among the chemical compounds contributing to the flavour are carvacrol, thymol, limonene, pinene, ocimene, and caryophyllene.[12]

Oregano's most prominent modern use is as the staple herb of Italian cuisine. Its popularity in the U.S. began when soldiers returning from World War II brought back with them a taste for the "pizza herb", which had probably been eaten in southern Italy for centuries.[13] There, it is most frequently used with roasted, fried, or grilled vegetables, meat, and fish. Oregano combines well with spicy foods popular in southern Italy. It is less commonly used in the north of the country, as marjoram is generally preferred.

The herb is widely used in cuisines of the Mediterranean Basin and Latin America, especially in Argentine cuisine.

In Turkish cuisine, oregano is mostly used for flavouring meat, especially mutton and lamb. In barbecue and kebab restaurants,[clarification needed] it can be usually found as a condiment, together with paprika, salt, and pepper.

During the summer, generous amounts of dried oregano are often added as a topping to a tomato and cucumber salad in Portugal, but it can be used to season meat and fish dishes as well.

The dried and ground leaves are most often used in Greece to add flavour to Greek salad, and is usually added to the lemon-olive oil sauce that accompanies fish or meat grills and casseroles. 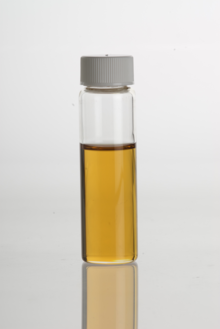 Oregano oil has been used in folk medicine over centuries.[10] Oregano essential oil is extracted from the leaves of the oregano plant. Although oregano or its oil may be used as a dietary supplement, there is no clinical evidence to indicate that either has any effect on human health.[10][14]

In 2014, the US Food and Drug Administration (FDA) warned a Utah company, Young Living, that its herbal products, including oregano essential oil, were being promoted to have numerous unproven anti-disease effects, and so were being sold as unauthorized misbranded drugs subject to seizure and federal penalties.[15] Similar FDA warning letters for false advertising and unproven health claims about oregano essential oil products were published in 2017 and 2018.[16][17]

The essential oil of oregano is composed primarily of monoterpenoids and monoterpenes, with the relative concentration of each compound varying widely across geographic origin and other factors. Over 60 different compounds have been identified, with the primary ones being carvacrol and thymol ranging to over 80%, while lesser abundant compounds include p-cymene, γ-terpinene, caryophyllene, spathulenol, germacrene D, β-fenchyl alcohol and δ-terpineol.[20]

Drying of the plant material affects both quantity and distribution of volatile compounds, with methods using higher heat and longer drying times having greater negative impact. A sample of fresh whole plant material found to contain 33 g/kg dry weight (3.1 g/kg wet) decreased to below a third after warm-air convection drying. Much higher concentrations of volatile compounds are achieved towards the end of the growing season.[21]