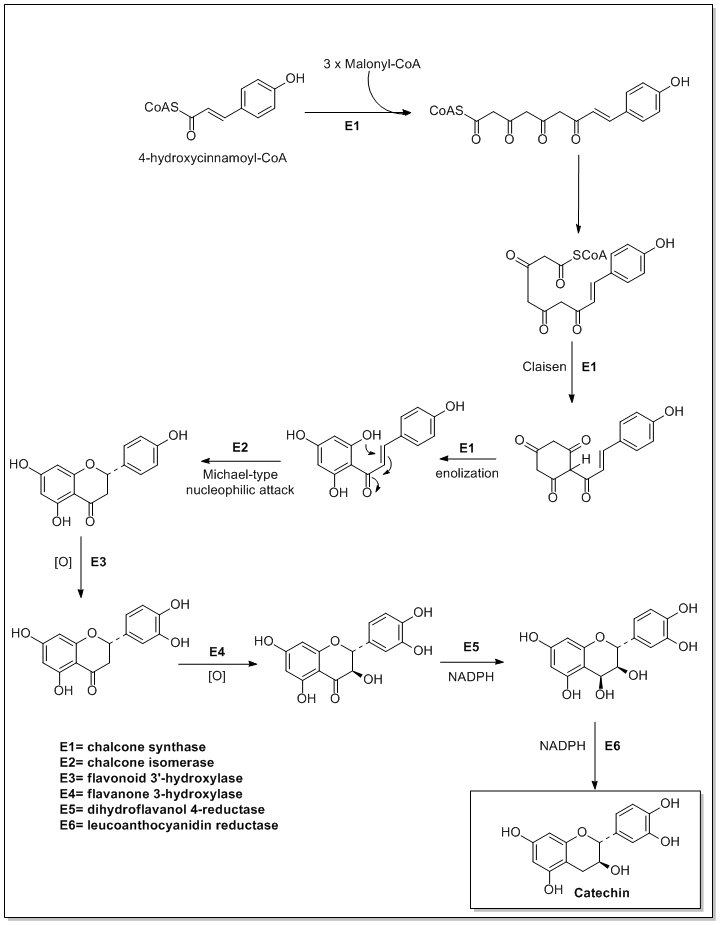 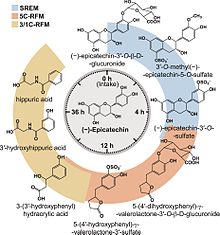 Biotransformation of (+)-catechin into taxifolin by a two-step oxidation can be achieved by Burkholderia sp.[35]

Association between flavan-3-ol intake and incidence of cardiovascular disease in different cohort studies.[40] Data compare the bottom and top quintiles of intake.

Only limited evidence from dietary studies indicates that catechins may affect endothelium-dependent vasodilation which could contribute to normal blood flow regulation in humans.[41][42] Green tea catechins may improve blood pressure, especially when systolic blood pressure is above 130 mmHg.[43][44]

Due to extensive metabolism during digestion, the fate and activity of catechin metabolites responsible for this effect on blood vessels, as well as the actual mode of action, are unknown.[33][45]

Other data from observational cohort studies did not show a consistent association between flavan-3-ol intake and risk of cardiovascular diseases.[40] A meta-analysis also indicated that green tea catechins may favorably affect cholesterol.[43]

One limited meta-analysis showed that increasing consumption of green tea and its catechins to seven cups per day provided a small reduction in prostate cancer.[47] Nanoparticle methods are under preliminary research as potential delivery systems of catechins.[48]

Catechins released into the ground by some plants may hinder the growth of their neighbors, a form of allelopathy.[49] Centaurea maculosa, the spotted knapweed often studied for this behavior, releases catechin isomers into the ground through its roots, potentially having effects as an antibiotic or herbicide. One hypothesis is that it causes a reactive oxygen species wave through the target plant's root to kill root cells by apoptosis.[50] Most plants in the European ecosystem have defenses against catechin, but few plants are protected against it in the North American ecosystem where Centaurea maculosa is an invasive, uncontrolled weed.[49]