The flavor and aroma of its seeds have similarities with some other spices, such as star anise,[4] fennel, and liquorice. It is widely cultivated and used to flavor food, candy, and alcoholic drinks, especially around the Mediterranean.

The name "anise" is derived via Old French from the Latin word, anisum, or Greek, anison, referring to dill.[6] 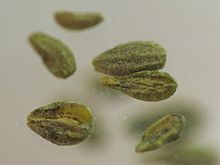 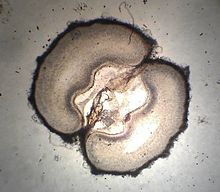 Anise is an herbaceous annual plant growing to 90 cm (3 ft) or more. The leaves at the base of the plant are simple, 10–50 mm (3⁄8–2 in) long and shallowly lobed, while leaves higher on the stems are feathery pinnate, divided into numerous small leaflets. The flowers are either white or yellow, approximately 3 mm (1⁄8 in) in diameter, produced in dense umbels. The fruit is an oblong dry schizocarp, 3–6 mm (1⁄8–1⁄4 in) long, usually called "aniseed".[7]

Anise is a food plant for the larvae of some Lepidoptera species (butterflies and moths), including the lime-speck pug and wormwood pug. 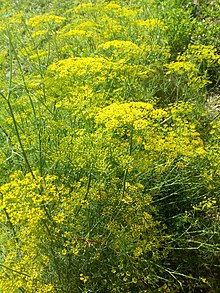 Anise plant seed in the fields of Sindh

Anise plants grow best in light, fertile, well-drained soil. The seeds should be planted as soon as the ground warms up in spring. Because the plants have a taproot, they do not transplant well after being established, so they should either be started in their final location or be transplanted while the seedlings are still small.

Western cuisines have long used anise to flavor dishes, drinks, and candies. The word is used for both the species of herb and its licorice-like flavor. The most powerful flavor component of the essential oil of anise, anethole, is found in both anise and an unrelated spice indigenous to northern China[9] called star anise (Illicium verum) widely used in South Asian, Southeast Asian, and East Asian dishes. Star anise is considerably less expensive to produce, and has gradually displaced P. anisum in Western markets. While formerly produced in larger quantities, by 1999 world production of the essential oil of anise was only 8 tons, compared to 400 tons of star anise.[10] 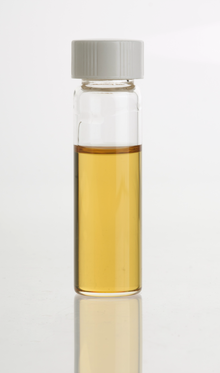 As with all spices, the composition of anise varies considerably with origin and cultivation method. These are typical values for the main constituents.[11]

In particular, the anise seeds products should also contain more than 0.2 milliliter volatile oil per 100 grams of spice.[12]

Anise essential oil can be obtained from the fruits by either steam distillation or extraction using supercritical carbon dioxide.[13] The yield of essential oil is influenced by the growing conditions[14] and extraction process, with supercritical extraction being more efficient.[13] Regardless of the method of isolation the main component of the oil is anethole (80–90%), with minor components including 4-anisaldehyde, estragole and pseudoisoeugenyl-2-methylbutyrates, amongst others.[15] Anethole is responsible for anise's characteristic odor and flavor.[16]

An unwrapped 'Troach drop', purchased at the Black Country Living Museum in the English Midlands, where such sweets are traditional

Anise is sweet and very aromatic, distinguished by its characteristic flavour.[7] The seeds, whole or ground, are used for preparation of teas and tisanes (alone or in combination with other aromatic herbs), as well as in a wide variety of regional and ethnic confectioneries, including black jelly beans, British aniseed balls and "troach" drops,[17] Australian humbugs, New Zealand aniseed wheels, Italian pizzelle, German Pfeffernüsse and Springerle, Austrian Anisbögen, Dutch muisjes, New Mexican bizcochitos, and Peruvian picarones. It is a key ingredient in Mexican atole de anís and champurrado, which is similar to hot chocolate, it is taken as a digestive after meals in India and Pakistan, and it's used in brines in the Italian region of Puglia.

Anise is used to flavor Greek ouzo;[20] Italian sambuca;[20] Bulgarian and Macedonian mastika;[20] French absinthe, anisette,[21] and pastis;[22] Spanish Anís del Mono,[23] Anísado[20] and Herbs de Majorca;[24] Turkish and Armenian rakı;[20] Lebanese, Egyptian, Syrian, Jordanian, and Israeli arak;[20] and Algerian Anisette Cristal.[20] Outside the Mediterranean region, it is found in Colombian aguardiente[21] and Mexican Xtabentún.[25] These liquors are clear, but on addition of water become cloudy, a phenomenon known as the ouzo effect.[26][27]

Anise is used together with other herbs and spices in some root beers, such as Virgil's in the United States.[28][29]

The main use of anise in traditional European herbal medicine was for its carminative effect (reducing flatulence),[4] as noted by John Gerard in his Great Herball, an early encyclopedia of herbal medicine:

The seed wasteth and consumeth winde, and is good against belchings and upbraidings of the stomach, alaieth gripings of the belly, provoketh urine gently, maketh abundance of milke, and stirreth up bodily lust: it staieth the laske (diarrhea), and also the white flux (leukorrhea) in women.[30]

According to Pliny the Elder, anise was used as a cure for sleeplessness, chewed with alexanders and a little honey in the morning to freshen the breath, and, when mixed with wine, as a remedy for asp bites (N.H. 20.72).[31] In 19th-century medicine, anise was prepared as aqua anisi ("Water of Anise") in doses of an ounce or more and as spiritus anisi ("Spirit of Anise") in doses of 5–20 minims.[8] In Turkish folk medicine, its seeds have been used as an appetite stimulant, tranquilizer, or diuretic.[32]

Builders of steam locomotives in Britain incorporated capsules of aniseed oil into white metal plain bearings, so the distinctive smell would give warning in case of overheating.[33] Anise can be made into a liquid scent and is used for both drag hunting and fishing. It is put on fishing lures to attract fish.[34][35]