Alcohol flush reaction is a condition in which a person develops flushes or blotches associated with erythema on the face, neck, shoulders, and in some cases, the entire body after consuming alcoholic beverages. The reaction is the result of an accumulation of acetaldehyde, a metabolic byproduct of the catabolic metabolism of alcohol, and is caused by an aldehyde dehydrogenase 2 deficiency.[4]

Heat flush is common in Indigenous peoples of the Americas, East Asians, with approximately 30 to 50% of Chinese, Japanese, and Koreans showing characteristic physiological responses to drinking alcohol that includes facial flushing, nausea, headaches and a fast heart rate.[1][2][3][8] 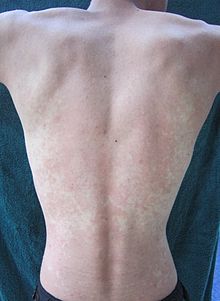 Alcohol flush reaction is best known as a condition that is experienced by people of East Asian descent; due to this, the condition is often given names such as "Asian flush" or "Asian glow." 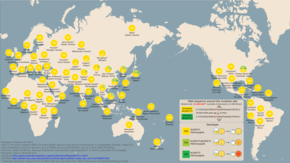 Around 30–50% of East Asians carry the mitochondrial rs671 (ALDH2*2) allele, which results in a less functional acetaldehyde dehydrogenase enzyme, responsible for the breakdown of acetaldehyde, and accounts for most incidents of alcohol flush reaction worldwide. According to the analysis by HapMap project, 30% to 50% of people of Chinese, Japanese, and Korean ancestry have at least one ALDH2*2 allele, while it is rare among Europeans and Sub-Saharan Africans.[8]

The rs671 allele is native to East Asia and most common in southeastern China. Analysis correlates the rise and spread of rice cultivation in South China with the spread of the allele.[5] The reasons for this positive selection are not known, but it has been hypothesized that elevated concentrations of acetaldehyde may have conferred protection against certain parasitic infections, such as Entamoeba histolytica.[13]

The idea that acetaldehyde is the cause of the flush is also shown by the clinical use of disulfiram (Antabuse), which blocks the removal of acetaldehyde from the body via ALDH inhibition. The high acetaldehyde concentrations described share similarity to symptoms of the flush (flushing of the skin, accelerated heart rate, shortness of breath, throbbing headache, mental confusion and blurred vision).[15]

For measuring the level of flush reaction to alcohol, the most accurate method is to determine the level of acetaldehyde in the blood stream. This can be measured through both a breathalyzer test or a blood test.[16] Additionally, measuring the amount of alcohol metabolizing enzymes alcohol dehydrogenases and aldehyde dehydrogenase through genetic testing can predict the amount of reaction that one would have.