Agaricus subrufescens (syn. Agaricus blazei, Agaricus brasiliensis or Agaricus rufotegulis) is a species of mushroom, commonly known as almond mushroom, mushroom of the sun, God's mushroom, mushroom of life, royal sun agaricus, jisongrong, or himematsutake (Chinese: 姬松茸, Japanese: 姫まつたけ, "princess matsutake") and by a number of other names. Agaricus subrufescens is edible, with a somewhat sweet taste and a fragrance of almonds.

Agaricus subrufescens was first described by the American botanist Charles Horton Peck in 1893.[1] During the late nineteenth and early twentieth centuries, it was cultivated for the table in the eastern United States.[2] It was discovered again in Brazil during the 1970s, and misidentified as Agaricus blazei Murrill, a species originally described from Florida. It was soon marketed for its purported medicinal properties under various names, including ABM (for Agaricus blazei Murrill), cogumelo do sol (mushroom of the sun), cogumelo de Deus (mushroom of God), cogumelo de vida (mushroom of life), himematsutake, royal sun agaricus, Mandelpilz, and almond mushroom. 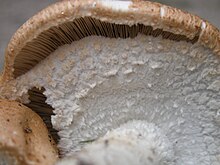 Initially, the cap is hemispherical, later becoming convex, with a diameter of 5 to 18 cm (2 to 7 in).[4] The cap surface is covered with silk-like fibers, although in maturity it develops small scales (squamulose). The color of the cap may range from white to grayish or dull reddish brown; the cap margin typically splits with age. The flesh of A. subrufescens is white, and has the taste of "green nuts", with the odor of almonds.[4] The gills are not attached to the stalk (free), narrow, and crowded closely together. They start out whitish in color, then later pinkish, and finally black-brown as the spores mature. Spores are ellipsoid, smooth, dark purplish-brown when viewed microscopically, with dimensions of 6–7.5 by 4–5 μm. The stipe is 6 to 15 cm (2+1⁄2 to 6 in) by 1 to 1.5 cm (3⁄8 to 5⁄8 in) thick, and bulbous at the base. Initially solid, the stipe becomes hollow with age; it is cottony (floccose) to scaly toward the base.[4] The annulus is abundant and double-layered; it is bent downward toward the stem, smooth and whitish on the upper side, and covered with cottony scales on the lower side.

Agaricus subrufescens is edible, with a somewhat sweet taste and an almond aroma resulting from benzaldehyde, benzyl alcohol, benzonitrile, and methyl benzoate.[5]

Agaricus subrufescens forms fruit bodies singly or in clusters in leaf litter in rich soil, often in domestic habitats.[6] Originally described from the northeastern United States and Canada, it has been found growing in California, Hawaii, Great Britain, the Netherlands, Taiwan, Philippines, Australia, and Brazil.[2]

Used in traditional and alternative medicine for its supposed anti-cancer effects, Agaricus mushrooms have not been assessed by sufficient high-quality clinical research to define safety and biological properties upon consumption as a food, dietary supplement, or drug.[7] Preliminary research indicates Agaricus products may have toxic effects on liver function marked by increased serum level of liver enzymes, especially in people with ovarian cancer,[7][8] and may cause allergic reactions.[7] The U.S. Food and Drug Administration has issued warning letters to companies marketing Agaricus supplement products with unproven health claims of providing benefits to the immune system.[9][10]