Urtica is a genus of flowering plants in the family Urticaceae. Many species have stinging hairs and may be called nettles or stinging nettles, although the latter name applies particularly to Urtica dioica.

Urtica species are food for the caterpillars of numerous Lepidoptera (butterflies and moths), such as the tortrix moth Syricoris lacunana and several Nymphalidae, such as Vanessa atalanta, one of the red admiral butterflies.[2]

Urtica species grow as annuals or perennial herbaceous plants, rarely shrubs. They can reach, depending on the type, location and nutrient status, a height of 10–300 centimetres (3.9–118.1 in). The perennial species have underground rhizomes. The green parts have stinging hairs. Their often quadrangular stems are unbranched or branched, erect, ascending or spreading.

In 1874, while in Collioure (south of France), French botanist Charles Naudin discovered that strong winds during 24 hours made the stinging hairs of Urtica harmless for a whole week.[3] 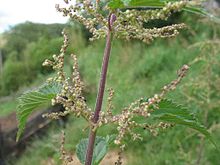 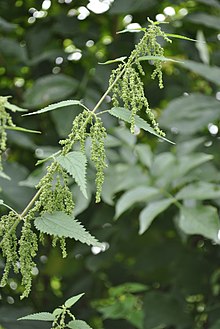 A large number of species included within the genus in the older literature are now recognized as synonyms of Urtica dioica. Some of these taxa are still recognized as subspecies.[4]

Species in the genus Urtica, and their primary natural ranges, include:[citation needed]

Due to the stinging hairs, Urtica species are rarely eaten by herbivores, but rather provide shelter for insects, such as aphids, butterfly larvae, and moths.[5]

Fabric woven of nettle fiber was found in burial sites dating to the Bronze Age, and in clothing fabric, sailcloth, fishing nets, and paper by undeveloped communities.[6] In New Zealand, U. ferox is classified among poisonous plants, most commonly upon skin contact.[7]

Urtica, called kopriva in Bulgarian and Slovenian, and urzica in Romanian, is an ingredient in soups, omelettes, banitsa, purée, and other dishes. In Mazandaran, northern Iran, a soup (Āsh) is made using this plant.[8] Nettles were used in traditional practices to make nettle tea, juice, and ale, and to preserve cheeses, such as in Cornish Yarg.[6]

Nettles have many folklore traditions associated with them. The folklore mainly relates to the stinging nettle (Urtica dioica).[citation needed]

Milarepa, the great Tibetan ascetic and saint, was reputed to have survived his decades of solitary meditation by subsisting on nothing but nettles; his hair and skin turned green and he lived to the age of 83.[9]

The Caribbean trickster figure Anansi appears in a story about nettles, in which he has to chop down a huge nettle patch in order to win the hand of the king's daughter.[10]

An old Scots rhyme about the nettle:

Coo, cow, and stoo are all Scottish for cut back or crop (although, curiously, another meaning of "stoo" is to throb or ache), while "laich" means short or low to the ground.[11] Given the repetition of "early," presumably this is advice to harvest nettles first thing in the morning and to cut them back hard [which seems to contradict the advice of the Royal Horticultural Society].

A well-known English rhyme about the stinging nettle is:

In Hans Christian Andersen's fairy-tale "The Wild Swans," the princess had to weave coats of nettles to break the spell on her brothers.