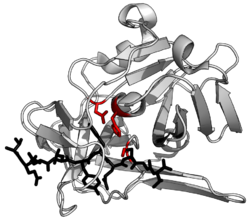 The structure of a protease (TEV protease) complexed with its peptide substrate in black with catalytic residues in red.(PDB: 1LVB​)

A protease (also called a peptidase or proteinase) is an enzyme that catalyzes (increases the rate of) proteolysis, the breakdown of proteins into smaller polypeptides or single amino acids. They do this by cleaving the peptide bonds within proteins by hydrolysis, a reaction where water breaks bonds. Proteases are involved in many biological functions, including digestion of eaten/swallowed proteins, protein catabolism (breakdown of old proteins),[1][2] and cell signalling.

Without additional helping mechanisms, proteolysis would be very slow, taking hundreds of years. Proteases can be found in all forms of life and viruses. They have independently evolved multiple times, and different classes of protease can perform the same reaction by completely different catalytic mechanisms.

Proteases can be classified into seven broad groups:[3]

Proteases were first grouped into 84 families according to their evolutionary relationship in 1993, and classified under four catalytic types: serine, cysteine, aspartic, and metallo proteases.[4] The threonine and glutamic-acid proteases were not described until 1995 and 2004 respectively. The mechanism used to cleave a peptide bond involves making an amino acid residue that has the cysteine and threonine (proteases) or a water molecule (aspartic acid, metallo- and acid proteases) nucleophilic so that it can attack the peptide carboxyl group. One way to make a nucleophile is by a catalytic triad, where a histidine residue is used to activate serine, cysteine, or threonine as a nucleophile. This is not an evolutionary grouping, however, as the nucleophile types have evolved convergently in different superfamilies, and some superfamilies show divergent evolution to multiple different nucleophiles.

A seventh catalytic type of proteolytic enzymes, asparagine peptide lyase, was described in 2011. Its proteolytic mechanism is unusual since, rather than hydrolysis, it performs an elimination reaction.[5] During this reaction, the catalytic asparagine forms a cyclic chemical structure that cleaves itself at asparagine residues in proteins under the right conditions. Given its fundamentally different mechanism, its inclusion as a peptidase may be debatable.[5]

An up-to-date classification of protease evolutionary superfamilies is found in the MEROPS database.[6] In this database, proteases are classified firstly by 'clan' (superfamily) based on structure, mechanism and catalytic residue order (e.g. the PA clan where P indicates a mixture of nucleophile families). Within each 'clan', proteases are classified into families based on sequence similarity (e.g. the S1 and C3 families within the PA clan). Each family may contain many hundreds of related proteases (e.g. trypsin, elastase, thrombin and streptogrisin within the S1 family).

Currently more than 50 clans are known, each indicating an independent evolutionary origin of proteolysis.[6]

Classification based on optimal pH[edit]

Alternatively, proteases may be classified by the optimal pH in which they are active: 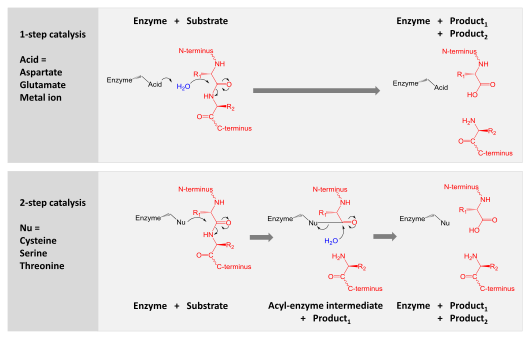 A comparison of the two hydrolytic mechanisms used for proteolysis. Enzyme is shown in black, substrate protein in red and water in blue.The top panel shows 1-step hydrolysis where the enzyme uses an acid to polarise water which then hydrolyses the substrate. The bottom panel shows 2-step hydrolysis where a residue within the enzyme is activated to act as a nucleophile (Nu) and attack the substrate. This forms an intermediate where the enzyme is covalently linked to the N-terminal half of the substrate. In a second step, water is activated to hydrolyse this intermediate and complete catalysis. Other enzyme residues (not shown) donate and accept hydrogens and electrostatically stabilise charge build-up along the reaction mechanism.
See also: Catalytic triad

Catalysis is achieved by one of two mechanisms:

Proteolysis can be highly promiscuous such that a wide range of protein substrates are hydrolysed. This is the case for digestive enzymes such as trypsin which have to be able to cleave the array of proteins ingested into smaller peptide fragments. Promiscuous proteases typically bind to a single amino acid on the substrate and so only have specificity for that residue. For example, trypsin is specific for the sequences ...K\... or ...R\... ('\'=cleavage site).[8]

Conversely some proteases are highly specific and only cleave substrates with a certain sequence. Blood clotting (such as thrombin) and viral polyprotein processing (such as TEV protease) requires this level of specificity in order to achieve precise cleavage events. This is achieved by proteases having a long binding cleft or tunnel with several pockets along it which bind the specified residues. For example, TEV protease is specific for the sequence ...ENLYFQ\S... ('\'=cleavage site).[9]

Proteases, being themselves proteins, are cleaved by other protease molecules, sometimes of the same variety. This acts as a method of regulation of protease activity. Some proteases are less active after autolysis (e.g. TEV protease) whilst others are more active (e.g. trypsinogen).

Proteases occur in all organisms, from prokaryotes to eukaryotes to viruses. These enzymes are involved in a multitude of physiological reactions from simple digestion of food proteins to highly regulated cascades (e.g., the blood-clotting cascade, the complement system, apoptosis pathways, and the invertebrate prophenoloxidase-activating cascade). Proteases can either break specific peptide bonds (limited proteolysis), depending on the amino acid sequence of a protein, or completely break down a peptide to amino acids (unlimited proteolysis). The activity can be a destructive change (abolishing a protein's function or digesting it to its principal components), it can be an activation of a function, or it can be a signal in a signalling pathway.

Protease containing plant-solutions called vegetarian rennet has been in use for hundreds of years in Europe and middle-east for making kosher and halal Cheeses. Vegetarian rennet from Withania coagulans has been in use for thousands of years as Ayurvedic remedy for digestion and diabetes in the Indian subcontinent. It is also used to make Paneer.

Plant genomes encode hundreds of proteases, largely of unknown function. Those with known function are largely involved in developmental regulation.[10] Plant proteases also play a role in regulation of photosynthesis.[11]

Proteases are used throughout an organism for various metabolic processes. Acid proteases secreted into the stomach (such as pepsin) and serine proteases present in duodenum (trypsin and chymotrypsin) enable us to digest the protein in food. Proteases present in blood serum (thrombin, plasmin, Hageman factor, etc.) play important role in blood-clotting, as well as lysis of the clots, and the correct action of the immune system. Other proteases are present in leukocytes (elastase, cathepsin G) and play several different roles in metabolic control. Some snake venoms are also proteases, such as pit viper haemotoxin and interfere with the victim's blood clotting cascade. Proteases determine the lifetime of other proteins playing important physiological role like hormones, antibodies, or other enzymes. This is one of the fastest "switching on" and "switching off" regulatory mechanisms in the physiology of an organism.

By complex cooperative action the proteases may proceed as cascade reactions, which result in rapid and efficient amplification of an organism's response to a physiological signal.

Bacteria secrete proteases to hydrolyse the peptide bonds in proteins and therefore break the proteins down into their constituent amino acids. Bacterial and fungal proteases are particularly important to the global carbon and nitrogen cycles in the recycling of proteins, and such activity tends to be regulated by nutritional signals in these organisms.[12] The net impact of nutritional regulation of protease activity among the thousands of species present in soil can be observed at the overall microbial community level as proteins are broken down in response to carbon, nitrogen, or sulfur limitation.[13]

A secreted bacterial protease may also act as an exotoxin, and be an example of a virulence factor in bacterial pathogenesis (for example, exfoliative toxin). Bacterial exotoxic proteases destroy extracellular structures.

Some viruses express their entire genome as one massive polyprotein and use a protease to cleave this into functional units (e.g. polio, norovirus, and TEV proteases).[14] These proteases (e.g. TEV protease) have high specificity and only cleave very restricted set of substrate sequences. They are therefore a common target for protease inhibitors.[15][16]

The field of protease research is enormous. Since 2004, approximately 8000 papers related to this field were published each year.[17] Proteases are used in industry, medicine and as a basic biological research tool.[18][19]

Digestive proteases are part of many laundry detergents and are also used extensively in the bread industry in bread improver. A variety of proteases are used medically both for their native function (e.g. controlling blood clotting) or for completely artificial functions (e.g. for the targeted degradation of pathogenic proteins). Highly specific proteases such as TEV protease and thrombin are commonly used to cleave fusion proteins and affinity tags in a controlled fashion.

Other natural protease inhibitors are used as defense mechanisms. Common examples are the trypsin inhibitors found in the seeds of some plants, most notable for humans being soybeans, a major food crop, where they act to discourage predators. Raw soybeans are toxic to many animals, including humans, until the protease inhibitors they contain have been denatured.