The composite of the organism's observable characteristics or traits
For a non-technical introduction to the topic, see Introduction to genetics.
For other uses, see Phenotype (disambiguation). 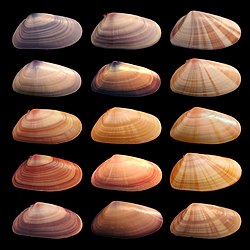 The shells of individuals within the bivalve mollusk species Donax variabilis show diverse coloration and patterning in their phenotypes. 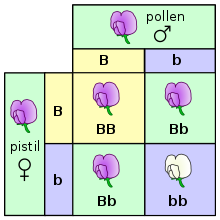 Here the relation between genotype and phenotype is illustrated, using a Punnett square, for the character of petal color in pea plants. The letters B and b represent genes for color, and the pictures show the resultant phenotypes.

In genetics, the phenotype (from Greek phainein, meaning 'to show', and typos, meaning 'type') of an organism is the composite of the organism's observable characteristics or traits. The term covers the organism's morphology or physical form and structure, its developmental processes, its biochemical and physiological properties, its behavior, and the products of behavior. An organism's phenotype results from two basic factors: the expression of an organism's genetic code, or its genotype, and the influence of environmental factors. Both factors may interact, further affecting phenotype. When two or more clearly different phenotypes exist in the same population of a species, the species is called polymorphic. A well-documented example of polymorphism is Labrador Retriever coloring; while the coat color depends on many genes, it is clearly seen in the environment as yellow, black, and brown. Richard Dawkins in 1978[1] and then again in his 1982 book The Extended Phenotype suggested that one can regard bird nests and other built structures such as caddis-fly larvae cases and beaver dams as "extended phenotypes".

Wilhelm Johannsen proposed the genotype-phenotype distinction in 1911 to make clear the difference between an organism's heredity and what that heredity produces.[2][3] The distinction resembles that proposed by August Weismann (1834-1914), who distinguished between germ plasm (heredity) and somatic cells (the body).

The genotype-phenotype distinction should not be confused with Francis Crick's central dogma of molecular biology, a statement about the directionality of molecular sequential information flowing from DNA to protein, and not the reverse.

The term "phenotype" has sometimes been incorrectly used as a shorthand for phenotypic difference from wild type, bringing the statement that a mutation has no phenotype.[4]

Despite its seemingly straightforward definition, the concept of the phenotype has hidden subtleties. It may seem that anything dependent on the genotype is a phenotype, including molecules such as RNA and proteins. Most molecules and structures coded by the genetic material are not visible in the appearance of an organism, yet they are observable (for example by Western blotting) and are thus part of the phenotype; human blood groups are an example. It may seem that this goes beyond the original intentions of the concept with its focus on the (living) organism in itself. Either way, the term phenotype includes inherent traits or characteristics that are observable or traits that can be made visible by some technical procedure. A notable extension to this idea is the presence of "organic molecules" or metabolites that are generated by organisms from chemical reactions of enzymes.

The interaction between genotype and phenotype has often been conceptualized by the following relationship:

A more nuanced version of the relationship is:

Genotypes often have much flexibility in the modification and expression of phenotypes; in many organisms these phenotypes are very different under varying environmental conditions (see ecophenotypic variation). The plant Hieracium umbellatum is found growing in two different habitats in Sweden. One habitat is rocky, sea-side cliffs, where the plants are bushy with broad leaves and expanded inflorescences; the other is among sand dunes where the plants grow prostrate with narrow leaves and compact inflorescences. These habitats alternate along the coast of Sweden and the habitat that the seeds of Hieracium umbellatum land in, determine the phenotype that grows.[9]

An example of random variation in Drosophila flies is the number of ommatidia, which may vary (randomly) between left and right eyes in a single individual as much as they do between different genotypes overall, or between clones raised in different environments.[citation needed]

The concept of phenotype can be extended to variations below the level of the gene that affect an organism's fitness. For example, silent mutations that do not change the corresponding amino acid sequence of a gene may change the frequency of guanine-cytosine base pairs (GC content). These base pairs have a higher thermal stability (melting point) than adenine-thymine, a property that might convey, among organisms living in high-temperature environments, a selective advantage on variants enriched in GC content.[citation needed]

Richard Dawkins described a phenotype that included all effects that a gene has on its surroundings, including other organisms, as an extended phenotype, arguing that "An animal's behavior tends to maximize the survival of the genes 'for' that behavior, whether or not those genes happen to be in the body of the particular animal performing it." [1] For instance, an organism such as a beaver modifies its environment by building a beaver dam; this can be considered an expression of its genes, just as its incisor teeth are—which it uses to modify its environment. Similarly, when a bird feeds a brood parasite such as a cuckoo, it is unwittingly extending its phenotype; and when genes in an orchid affect orchid bee behavior to increase pollination, or when genes in a peacock affect the copulatory decisions of peahens, again, the phenotype is being extended. Genes are, in Dawkins's view, selected by their phenotypic effects.[10]

Other biologists broadly agree that the extended phenotype concept is relevant, but consider that its role is largely explanatory, rather than assisting in the design of experimental tests.[11]

Not to be confused with Phoneme or Phonology.

Although a phenotype is the ensemble of observable characteristics displayed by an organism, the word phenome is sometimes used to refer to a collection of traits, while the simultaneous study of such a collection is referred to as phenomics.[12][13] Phenomics is an important field of study because it can be used to figure out which genomic variants affect phenotypes which then can be used to explain things like health, disease, and evolutionary fitness.[14] Phenomics forms a large part of the Human Genome Project[15]

Phenomics has widespread applications in the agricultural industry. With an exponentially growing population and inconsistent weather patterns due to global warming, it has become increasingly difficult to cultivate enough crops to support the world's population. Advantageous genomic variations, like drought and heat resistance, can be identified through the use of phenomics to create more durable GMOs.[16][17]

Phenomics is also a crucial stepping stone towards personalized medicine, particularly drug therapy. This application of phenomics has the greatest potential to avoid testing drug therapies that will prove to be ineffective or unsafe.[18] Once the phenomic database has acquired more data, patient phenomic information can be used to select specific drugs tailored to the patient. As the regulation of phenomics develops there is a potential that new knowledge bases will help achieve the promise of personalized medicine and treatment of neuropsychiatric syndromes.