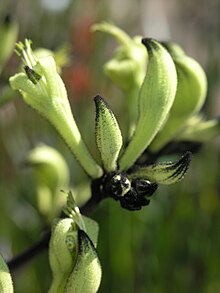 Kangaroo paw is the common name for a number of species, in two genera of the family Haemodoraceae, that are endemic to the south-west of Western Australia. These rhizomatous[1] perennial plants are noted for their unique bird-attracting flowers. The tubular flowers are coated with dense hairs and open at the apex with six claw-like structures, and it is from this paw-like formation that the common name "kangaroo paw" is derived.[2]

The kangaroo plant has been introduced into Japan and has been grown as a new ornamental crop mainly in Okinawa Island under a subtropical climate.[3]

The genus Anigozanthos' author was French botanist Jacques-Julien Houtou de Labillardière, who first collected the Kangaroo Paw in 1792 near Esperance. Red and green kangaroo paw was introduced to England in 1833, and was first described in 1836 by botanist David Don. The specific name manglesii is so named in honour of the first individual to raise the specimen from seed, Robert Mangles, which he did in his English garden. His experience with growing the specimen is recorded in letters to his brother James Mangles.[4]

In 1990, disease was found on the kangaroo paw plant in Okinawa. The unreported fungi, which associated the plant becoming very limp and wilt, was characterised by a discolouration of the plant leaving it a brown to black colour around the stalks, leaves and base of the plant. As the plant began to discolour over time, white cottony mycelia started to appear at the surface of the lesions and then the plant eventually died.[3]

The plant is native to south-western Australia, occurring naturally from the Murchison River in the North to Busselton and Mount Barker in the South, and Lake Muir to the East. It has been developed as a cut-flower crop in the United States, Israel and Japan. In Israel, plants are propagated from tissue culture imported from Australia and are then grown in unheated greenhouses in natural day conditions.[6] The plants have found their way to California and become popular among garden supply businesses there.[7]

Research has been conducted that indicates the spores from the plant could regenerate and reactive skin firmness as it targets the young cells at the source with increased collagen output.[8]

From the genus Anigozanthos:

Additional species in the genus Anigozanthos exist. They resemble kangaroo paws, however, they are instead known as "cat's paws":