The Bromeliaceae (the bromeliads) is a family of monocot flowering plants of 75 genera and around 3590 known species[2] native mainly to the tropical Americas, with a few species found in the American subtropics and one in tropical west Africa, Pitcairnia feliciana.[3]

It is among the basal families within the Poales and is the only family within the order that has septal nectaries and inferior ovaries.[4] These inferior ovaries characterize the Bromelioideae, a subfamily of the Bromeliaceae.[5] The family includes both epiphytes, such as Spanish moss (Tillandsia usneoides), and terrestrial species, such as the pineapple (Ananas comosus). Many bromeliads are able to store water in a structure formed by their tightly-overlapping leaf bases. However, the family is diverse enough to include the tank bromeliads, grey-leaved epiphyte Tillandsia species that gather water only from leaf structures called trichomes, and many desert-dwelling succulents.

The largest bromeliad is Puya raimondii, which reaches 3–4 m tall in vegetative growth with a flower spike 9–10 m tall, and the smallest is Spanish moss.[citation needed] 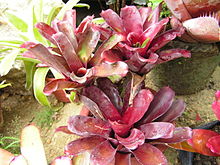 Bromeliads are plants that are adapted to various climates. Foliage takes different shapes, from needle-thin to broad and flat, symmetrical to irregular, spiky to soft. The foliage, which usually grows in a rosette, is widely patterned and colored. Leaf colors range from maroon, through shades of green, to gold. Varieties may have leaves with red, yellow, white and cream variations. Others may be spotted with purple, red, or cream, while others have different colors on the tops and botecies Tillandsia cyanea have a fragrance resembling that of clove spice.

Various organisms take advantage of the pools of water trapped by bromeliads. A study of 209 plants from the Ecuadorian lowlands identified 11,219 animals, representing more than 300 distinct species, many of which are found only on bromeliads. Examples include some species of ostracods, small salamanders about 2.5 cm (1 in) in length, and tree frogs. Jamaican bromeliads are home to Metopaulias depressus, a reddish-brown crab 2 cm (0.8 in) across, which has evolved social behavior to protect its young from predation by Diceratobasis macrogaster, a species of damselfly whose larvae live in bromeliads. Some bromeliads even form homes for other species of bromeliads.[6]

Plants in the Bromeliaceae are widely represented in their natural climates across the Americas. One species can be found in Africa.[7] They can be found at altitudes from sea level to 4200 meters, from rainforests to deserts. 1814 species are epiphytes, some are lithophytes, and some are terrestrial. Accordingly, these plants can be found in the Andean highlands, from northern Chile to Colombia, in the Sechura Desert of coastal Peru, in the cloud forests of Central and South America, in southern United States from southern Virginia to Florida to Texas, and in far southern Arizona.

Bromeliads often serve as phytotelmata, accumulating water between their leaves. The aquatic habitat created as a result is host to a diverse array of invertebrates, especially aquatic insect larvae.[8] These bromeliad invertebrates benefit their hosts by increasing nitrogen uptake into the plant.[9][10][11]

Bromeliads are among the more recent plant groups to have emerged. The greatest number of primitive species resides in the Andean highlands of South America, where they originated in the tepuis of the Guiana Shield approximately 100 million years ago.[12] However, the family did not diverge into its extant subfamilies until 19 million years ago. The long period between the origin and diversification of bromeliads, during which no extant species evolved, suggests that there was much speciation and extinction during that time, which would explain the genetic distance of the Bromeliaceae from other families within the Poales. The most basal genus, Brocchinia, is endemic to the Guiana Shield, and is placed as the sister group to the remaining genera in the family.[13] The subfamilies Navioideae and Lindmanioideae are endemic to the Guiana Shield as well.

The West African species Pitcairnia feliciana is the only bromeliad not endemic to the Americas, and is thought to have reached Africa via long-distance dispersal about 12 million years ago.[12]

The first groups to leave the Guiana Shield were the genus Hechtia, which spread to Central America via long-distance dispersal, and the subfamily Tillandsioideae, which spread gradually into northern South America. Both of these movements occurred approximately 15.4 million years ago. When it reached the Andes mountains, the speciation of Tillandsioideae occurred quite rapidly, largely due to the Andean uplift, which was also occurring rapidly from 14.2 to 8.7 million years ago. The uplift created a new mountainous environment for the epiphytic Tillandsioides to colonize, and greatly altered the region's geological and climatic conditions. These new conditions directly drove the speciation of the Tillandsioides, and also drove the speciation of their animal pollinators, such as hummingbirds.[14][15][16][17]

Around 5.5 million years ago, a clade of epiphytic Bromelioids arose in Serra do Mar, a lush mountainous region on the coast of Southeastern Brazil. This is thought to have been caused not only by the uplift of Serra do Mar itself at that time, but also because of the continued uplift of the distant Andes mountains, which impacted the circulation of air and created a cooler, wetter climate in Serra do Mar. [15] These epiphytes thrived in this humid environment, since their trichomes rely on water in the air rather than from the ground like terrestrial plants. Many epiphytic bromeliads with the tank habit also speciated here.

Even before this, a few other bromeliads had already dispersed to the Brazilian shield while the climate was still arid, likely through a gradual process of short-distance dispersal. These make up the terrestrial members of the Bromelioideae, which have highly xeromorphic characters.[15]

Bromeliads are able to live in a vast array of environmental conditions due to their many adaptations. Trichomes, in the form of scales or hairs, allow bromeliads to capture water in cloud forests and help to reflect sunlight in desert environments.[18] Some bromeliads have also developed an adaptation known as the tank habit, which involves them forming a tightly bound structure with their leaves that helps to capture water and nutrients in the absence of a well-developed root system.[18] Bromeliads also use crassulacean acid metabolism (CAM) photosynthesis to create sugars. This adaptation allows bromeliads in hot or dry climates to open their stomates at night rather than during the day, which reduces water loss.[19]

Both CAM and epiphytism have evolved multiple times within the family, with some taxa even reverting to C3 photosynthesis as they radiated into less arid climates.[15]

The family Bromeliaceae is currently placed in the order Poales.

The family Bromeliaceae is organized into eight subfamilies:[14]

Brocchinioideae is defined as the most basal branch of Bromeliaceae based on both morphological and molecular evidence, namely genes in chloroplast DNA.[23]

Lindmanioideae is the next most basal branch distinguished from the other subfamilies by convolute sepals and chloroplast DNA.[15]

Hechtioideae is also defined based on analyses of chloroplast DNA; similar morphological adaptations to arid environments also found in other groups (namely the genus Puya) are attributed to convergent evolution.[14]

Navioideae is split from Pitcairnioideae based on its cochlear sepals and chloroplast DNA.[24]

Puyoideae has been re-classified multiple times and its monophyly remains controversial according to analyses of chloroplast DNA.[15]

Humans have been using bromeliads for thousands of years. The Incas, Aztecs, Maya and others used them for food, protection, fiber and ceremony, just as they are still used today. European interest began when Spanish conquistadors returned with pineapple, which became so popular as an exotic food that the image of the pineapple was adapted into European art and sculpture. In 1776, the species Guzmania lingulata was introduced to Europe, causing a sensation among gardeners unfamiliar with such a plant. In 1828, Aechmea fasciata was brought to Europe, followed by Vriesea splendens in 1840. These transplants were so successful, they are still among the most widely grown bromeliad varieties.

In the 19th century, breeders in Belgium, France and the Netherlands started hybridizing plants for wholesale trade. Many exotic varieties were produced until World War I, which halted breeding programs and led to the loss of some species. The plants experienced a resurgence of popularity after World War II. Since then, Dutch, Belgian and North American nurseries have greatly expanded bromeliad production.

Only one bromeliad, the pineapple (Ananas comosus), is a commercially important food crop. Bromelain, a common ingredient in meat tenderizer, is extracted from pineapple stems. Many other bromeliads are popular ornamental plants, grown as both garden and houseplants.

Édouard André was a French collector/explorer whose many discoveries of bromeliads in the Cordilleras of South America would be influential on horticulturists to follow. He served as a source of inspiration to 20th-century collectors, in particular Mulford B. Foster and Lyman Smith of the United States and Werner Rauh of Germany and Michelle Sullivan of Australia.[25]