A 19th-century carving of a tattooed Maori from kauri gum. The carving is owned and displayed by the Dargaville Museum, New Zealand.
See also: Kauri Museum

Kauri gum (/koʊˈri/[1] is a fossilised resin extracted from kauri trees (Agathis australis), which is made into crafts such as jewellery. Kauri forests once covered much of the North Island of New Zealand, before Māori and European settlers caused deforestation, causing several areas to revert to sand dunes, scrubs, and swamps. Even afterward, ancient kauri fields continued to provide a source for the gum and the remaining forests.[2][3]

Kauri gum formed when resin from kauri trees leaked out through fractures or cracks in the bark, hardening with the exposure to air. Lumps commonly fell to the ground and became covered with soil and forest litter, eventually fossilising. Other lumps formed as branches forked or trees were damaged, which released the resin.[4]

The Māori had many uses for the gum, which they called kapia. Fresh gum was used as a type of chewing gum (older gum was softened by soaking and mixing with juice of the puha thistle). Highly flammable, the gum was also used as a fire-starter, or bound in flax to act as a torch. Burnt and mixed with animal fat, it made a dark pigment for moko tattooing.[5] Kauri gum was also crafted into jewellery, keepsakes, and small decorative items. Like amber, kauri gum sometimes includes insects and plant material.[6]

Kauri gum was used commercially in varnish, and can be considered a type of copal (the name given to resin used in such a way). Kauri gum was found to be particularly good for this, and from the mid-1840s was exported to London and America. Tentative exports had begun a few years earlier, however, for use in marine glue and as fire-kindlers;[7] gum had even made up part of an export cargo to Australia in 1814.[8]

Since the kauri gum was found to mix more easily with linseed oil, at lower temperatures, than other resins, by the 1890s, 70 percent of all oil varnishes made in England used kauri gum.[9] It was used to a limited extent in paints during the late 19th century, and from 1910 was used extensively in the manufacture of linoleum. From the 1930s, the market for gum dropped as synthetic alternatives were found, but there remained niche uses for the gum in jewellery and specialist high-grade varnish for violins.[9]

The gum varied in color depending on the condition of the original tree. It also depended on where the gum had formed and how long it had been buried. Colors ranged from chalky-white, through red-brown to black; the most prized was a pale gold, as it was hard and translucent.[4][13] The size of each lump also varied greatly. Swamps tended to yield the small nuggets known as "chips", whereas the hillsides tended to produce larger lumps. The majority were the size of acorns, although some were found which weighed a few pounds; the largest (and rarest) were reported to weigh half a hundredweight.[14] Kauri gum shares a few characteristics with amber, another fossilised resin found in the Northern Hemisphere, but where amber can be dated as millions of years old, carbon-dating suggests the age of most kauri gum is a few thousand years.[7]

Most of the gumfields were in Northland, Coromandel and Auckland, the site of the original kauri forests. Initially, the gum was readily accessible, commonly found lying on the ground. Captain Cook reported the presence of resinous lumps on the beach at Mercury Bay, Coromandel, in 1769, although he suspected it came from the mangroves, and missionary Samuel Marsden spoke of their presence in Northland in 1819.[13]

By 1850, most of the surface-lying gum had been picked up, and people began digging for it. The hillsides yielded shallow-buried gum (about 1 m), but in the swamps and beaches, it was buried much further down (4 m or below).[2]

Gum-diggers were men and women who dug for kauri gum, a fossilised resin, in the old kauri fields of New Zealand at the end of the 19th and early 20th centuries. The gum was used mainly for varnish. The term may be a source for the nickname "Digger" given to New Zealand soldiers in World War I.[15] In 1898, a gum-digger described "the life of a gum-digger" as "wretched, and one of the last [occupations] a man would take to."[16]

Gum-diggers worked in the old kauri fields, most of which were then covered by swamp or scrub, digging for the gum. Much of the population was transient, moving from field to field, and they lived in rough huts or tents (which were called "whares", after the Maori for 'house'). It was extremely hard work and not very well paid, but it attracted many Maori and European settlers, including women and children.[17] There were many Dalmatians, who had first come to work the South Island goldfields in the 1860s.[18] They were transient workers, rather than settlers, and much of their income was sent out of the country, resulting in much resentment from the local workforce. In 1898, the "Kauri Gum Industry Act" was passed, which reserved gum-grounds for British subjects, and requiring all other diggers to be licensed. By 1910, only British subjects could hold gum-digging licences.[19]

Gum-digging was the major source of income for settlers in Northland, and farmers often worked the gumfields in the winter months to subsidise the poor income from their unbroken land. By the 1890s, 20,000 people were engaged in gum-digging, of which 7000 worked full-time.[20] Gum-digging was not restricted to settlers or workers in the rural areas; Auckland families would cross the Waitematā Harbour by ferry at weekends to dig in the fields around Birkenhead, causing damage to public roads and private farms, and leading to local council management of the problem.[21] 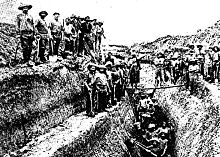 Most gum was dug from the ground using gum-spears (pointed rods to probe for gum) and "skeltons", defined as blade-edged spades for cutting through old wood and roots as well as soil. Once the gum was retrieved it would need to be scraped and cleaned.[22]

Digging in swamps was more complicated; a longer spear (up to 8m) was often used, often fitted with a hooked end to scoop out the lumps. Scrub was often cleared first with fire; some got out of control and swamp fires could burn for weeks.[23] Holes were often dug by teams in both hills and swamps—often up to 12m deep—and some wetlands were drained to aid in the excavation of gum.[24] As field gum became scarce, "bush gum" was obtained by purposely cutting the bark of kauri trees and returning months later to retrieve the hardened resin. Due to the damage caused to the trees by the cutting the practice was banned in state forests in 1905.[22] Gum chips, small lumps useful for the manufacture of linoleum, were difficult to find, and by 1910, the process of washing and sieving to retrieve the chips became common. The process was later mechanised.[25]

Gumdiggers generally sold their gum to local gumbuyers, who transported it to Auckland (generally by sea) for sale to merchants and exporters.[26] There were six major export firms in Auckland who dealt in gum, employing several hundred workers who graded and rescraped the gum for export, packing them in cases made from kauri timber.[27]

As early as the 1830s and 1840s, merchants, including Gilbert Mair and Logan Campbell, were buying gum from local Māori for £5 ($8.25) a ton, or trading it for goods.[8] The majority of the gum was exported to America and London (from whence it was distributed throughout Europe), although smaller amounts were sent to Australia, Hong Kong, Japan and Russia.[28]