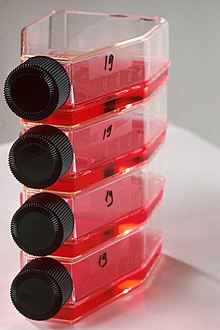 Tissue culture is the growth of tissues or cells in an artificial medium separate from the organism. This is typically facilitated via use of a liquid, semi-solid, or solid growth medium, such as broth or agar. Tissue culture commonly refers to the culture of animal cells and tissues, with the more specific term plant tissue culture being used for plants. The term "tissue culture" was coined by American pathologist Montrose Thomas Burrows.[1]

In 1885 Wilhelm Roux removed a section of the medullary plate of an embryonic chicken and maintained it in a warm saline solution for several days, establishing the basic principle of tissue culture. In 1907 the zoologist Ross Granville Harrison demonstrated the growth of frog embryonic cells that would give rise to nerve cells in a medium of clotted lymph. In 1913, E. Steinhardt, C. Israeli, and R. A. Lambert grew vaccinia virus in fragments of guinea pig corneal tissue.[2] In 1996, the first use of regenerative tissue was used to replace a small length of urethra, which led to the understanding that the technique of obtaining samples of tissue, growing it outside the body without a scaffold, and reapplying it, can be used for only small distances of less than 1 cm.[3]

Gottlieb Haberlandt first pointed out the possibilities of the culture of isolated tissues, plant tissue culture.[4] He suggested that the potentialities of individual cells via tissue culture as well as that the reciprocal influences of tissues on one another could be determined by this method. Since Haberlandt's original assertions, methods for tissue and cell culture have been realized, leading to significant discoveries in biology and medicine. His original idea, presented in 1902, was called totipotentiality: “Theoretically all plant cells are able to give rise to a complete plant.”[5][6][7] 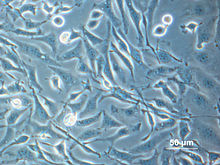 In modern usage, tissue culture generally refers to the growth of cells from a tissue from a multicellular organism in vitro. These cells may be cells isolated from a donor organism, "primary cells", or an immortalised cell line. The cells are bathed in a culture medium, which contains essential nutrients and energy sources necessary for the cells' survival.[8] The term tissue culture is often used interchangeably with cell culture

Tissue culture is an important tool for the study of the biology of cells from multicellular organisms. It provides an in vitro model of the tissue in a well defined environment which can be easily manipulated and analysed.

In animal tissue culture, cells may be grown as two-dimensional monolayers (conventional culture) or within fibrous scaffolds or gels to attain more naturalistic three-dimensional tissue-like structures (3D culture). Eric Simon, in a 1988 NIH SBIR grant report, showed that electrospinning could be used to produced nano- and submicron-scale polymeric fibrous scaffolds specifically intended for use as in vitro cell and tissue substrates. This early use of electrospun fibrous lattices for cell culture and tissue engineering showed that various cell types would adhere to and proliferate upon polycarbonate fibers. It was noted that as opposed to the flattened morphology typically seen in 2D culture, cells grown on the electrospun fibers exhibited a more rounded 3-dimensional morphology generally observed of tissues in vivo.[9]

Plant tissue culture in particular is concerned with the growing of entire plants from small pieces of plant tissue, cultured in medium[10]