Blend of spices or herbs 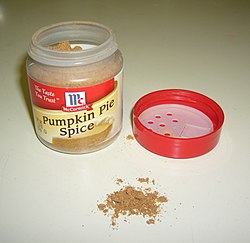 A container of pumpkin pie spice

Spice mixes are blended spices or herbs. When a certain combination of herbs or spices is called for a recipe, it is convenient to blend these ingredients beforehand. Blends such as chili powder, curry powder, herbes de Provence, garlic salt, and other seasoned salts are traditionally sold pre-made by grocers, and sometimes baking blends such as pumpkin pie spice are also available. These spice mixes are also easily made by the home cook for later use.

Masala is a term from the Indian subcontinent for a spice mix in certain proportions (From Urdu Masalah, via Arabic Masalih).[1][2] A masala can be either a combination of dried (and usually dry-roasted) spices, or a paste (such as vindaloo masala) made from a mixture of spices and other ingredients—often garlic, ginger, onions, chilli paste and tomato. Masalas are used extensively in Indian cuisine to add spice and flavour,[3] most familiarly to Western cuisine in chicken tikka masala and chicken curry.[4] Other South Asian cuisines including Bangladeshi, Nepali, Pakistani and Sri Lankan, and Southeast Asian cuisine such as Burmese regularly use spice mixes.[citation needed]

Ingredients for a Gulf-style baharat