Sedimentary rock which has a grain size in the silt range

Siltstone is a sedimentary rock which has a grain size in the silt range, finer than sandstone and coarser than claystones.

Siltstone is a clastic sedimentary rock. As its name implies, it is primarily composed (greater than 2/3) of silt sized particles, defined as grains 2–62 μm or 4 to 8 on the Krumbein phi (φ) scale. Siltstones differ significantly from sandstones due to their smaller pores and higher propensity for containing a significant clay fraction. Although often mistaken as a shale, siltstone lacks the fissility and laminations which are typical of shale. Siltstones may contain concretions. Unless the siltstone is fairly shaly, stratification is likely to be obscure and it tends to weather at oblique angles unrelated to bedding. Mudstone or shale are rocks that contain mud, which is material that has a range of silt and clay. Siltstone is differentiated by having a majority silt, not clay. 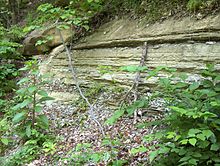