This article is about the spice. For other uses, see Paprika (disambiguation).

listen)[2]) is a ground spice made from dried red fruits of sweeter varieties of the plant Capsicum annuum.[3] It is traditionally made from Capsicum annuum varietals in the Longum group, which also includes chili peppers, but the peppers used for paprika tend to be milder and have thinner flesh.[4][5] In many languages, but not English, the word paprika also refers to the plant and the fruit from which the spice is made, as well as to peppers in the Grossum group (e.g. bell peppers).[6][7]:5, 73

The peppers used in making paprika originate from North America, in particular Central Mexico, where they have been cultivated for centuries. The peppers were subsequently introduced to the Old World, when peppers brought to Spain and Portugal in the 16th century. The seasoning is used to add color to many types of dishes in diverse cuisines.

The trade in paprika expanded from the Iberian Peninsula to Africa and Asia,[7]:8 and ultimately reached Central Europe through the Balkans, then under Ottoman rule, which explains the Hungarian origin of the English term. In Spanish, paprika has been known as pimentón since the 16th century, when it became a typical ingredient in the cuisine of western Extremadura.[7]:5, 73 Despite its presence in Central Europe since the beginning of Ottoman conquests, it did not become popular in Hungary until the late 19th century.[8]

Paprika can range from mild to hot – the flavor also varies from country to country – but almost all plants grown produce the sweet variety.[9] Sweet paprika is mostly composed of the pericarp, with more than half of the seeds removed, whereas hot paprika contains some seeds, stalks, placentas, and calyces.[7]:5, 73 The red, orange or yellow color of paprika is due to its content of carotenoids.[10] 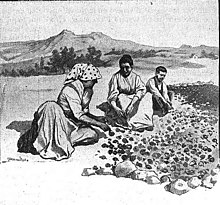 Opening the pepper, an illustration of Medina Vera.

Peppers, the raw material in paprika production, originated from North America, where they grow in the wild in Central Mexico and have for centuries been cultivated by the peoples of Mexico. The peppers were later introduced to the Old World, to Spain in the 16th century.

The plant used to make the Hungarian version of the spice was grown in 1569 by the Turks at Buda[11] (now part of Budapest, the capital of Hungary). It was historically used medicinally to treat cholera and typhus.[12] Central European paprika was hot until the 1920s, when a Szeged breeder found a plant that produced sweet fruit, which he grafted onto other plants.[9]

The first recorded use of the word paprika in English is from 1896,[11] although an earlier reference to Turkish paprika was published in 1831.[13] The word derives from the Hungarian word paprika, a diminutive of the Serbo-Croatian word papar (Cyrillic: папар) meaning "pepper",[14] which in turn came from the Latin piper or modern Greek piperi, ultimately from Sanskrit pippalī.[11] Paprika and similar words, peperke, piperke, and paparka, are used in various Slavic languages for bell peppers.[7]:5, 73 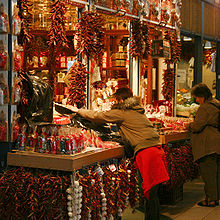 Paprika is produced in various places including Argentina, Mexico, Hungary, Serbia, Spain, the Netherlands, China, and some regions of the United States.[15][16]

Hungary is a major source of commonly used paprika.[16] It is available in different grades:

Paprika is used as an ingredient in numerous dishes throughout the world. It is principally used to season and color rices, stews, and soups, such as goulash, and in the preparation of sausages, mixed with meats and other spices. In the United States, paprika is frequently sprinkled raw on foods as a garnish, but the flavor is more effectively brought out by heating it in oil.[citation needed]

Hungarian national dishes incorporating paprika include gulyas (goulash), a meat stew, and paprikash (paprika gravy: a Hungarian recipe combining meat or chicken, broth, paprika, and sour cream). In Moroccan cuisine, paprika (tahmira) is usually augmented by the addition of a small amount of olive oil blended into it. Many dishes call for a generous amount of paprika (colorau) in Portuguese cuisine for taste and color.

The red, orange or yellow color of paprika powder derives from its mix of carotenoids.[10] Yellow-orange paprika colors derive primarily from α-carotene and β-carotene (provitamin A compounds), zeaxanthin, lutein and β-cryptoxanthin, whereas red colors derive from capsanthin and capsorubin.[10] One study found that zeaxanthin concentrations in orange paprika were considerable.[19] The same study found that lutein is much higher in orange paprika, compared to red or yellow.[19]

In a typical serving size of one teaspoon (2 grams), paprika supplies 6 calories and is rich in vitamin A (21% of the Reference Daily Intake, RDI), moderate in vitamin B6 (14% DV) and vitamin E (10% DV), and provides no other nutrients in significant content.[20]