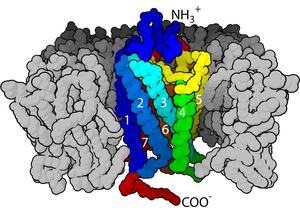 Figure 1. The seven transmembrane α-helix structure of a G-protein-coupled receptor.

In postsynaptic cells, neurotransmitter receptors receive signals that trigger an electrical signal, by regulating the activity of ion channels. The influx of ions through ion channels opened due to the binding of neurotransmitters to specific receptors can change the membrane potential of a neuron. This can result in a signal that runs along the axon (see action potential) and is passed along at a synapse to another neuron and possibly on to a neural network.[1] On presynaptic cells, there can be receptor sites specific to the neurotransmitters released by that cell (see Autoreceptor), which provide feedback and mediate excessive neurotransmitter release from it.[3]

Neurotransmitter (NT) receptors are located on the surface of neuronal and glial cells. At a synapse, one neuron sends messages to the other neuron via neurotransmitters. Therefore, the postsynaptic neuron, the one receiving the message, clusters NT receptors at this specific place in its membrane. NT receptors can be inserted into any region of the neuron's membrane such as dendrites, axons, and the cell body.[5] Receptors can be located in different parts of the body to act as either an inhibitor or an excitatory receptor for a specific Neurotransmitter [6] An example of this are the receptors for the neurotransmitter Acetylcholine (ACh), one receptor is located at the neuromuscular junction in skeletal muscle to facilitate muscle contraction (excitation), while the other receptor is located in the heart to slow down heart rate (inhibitory) [7]

Ligand-gated ion channels (LGICs) are one type of ionotropic receptor or channel-linked receptor. They are a group of transmembrane ion channels that are opened or closed in response to the binding of a chemical messenger (i.e., a ligand),[8] such as a neurotransmitter.[9]

The binding site of endogenous ligands on LGICs protein complexes are normally located on a different portion of the protein (an allosteric binding site) compared to where the ion conduction pore is located. The direct link between ligand binding and opening or closing of the ion channel, which is characteristic of ligand-gated ion channels, is contrasted with the indirect function of metabotropic receptors, which use second messengers. LGICs are also different from voltage-gated ion channels (which open and close depending on membrane potential), and stretch-activated ion channels (which open and close depending on mechanical deformation of the cell membrane).[9][10] 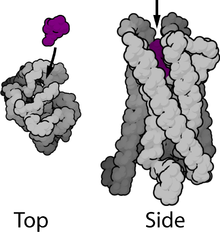 A mu-opioid G-protein-coupled receptor with its agonist

There are two principal signal transduction pathways involving the G protein-coupled receptors: the cAMP signal pathway and the phosphatidylinositol signal pathway.[14] When a ligand binds to the GPCR it causes a conformational change in the GPCR, which allows it to act as a guanine nucleotide exchange factor (GEF). The GPCR can then activate an associated G-protein by exchanging its bound GDP for a GTP. The G-protein's α subunit, together with the bound GTP, can then dissociate from the β and γ subunits to further affect intracellular signaling proteins or target functional proteins directly depending on the α subunit type (Gαs, Gαi/o, Gαq/11, Gα12/13).[15]:1160

The following are some major classes of neurotransmitter receptors:[17]