Methoxyflurane, marketed as Penthrox among others, is an inhaled medication primarily used to reduce pain following trauma.[2][3] It may also be used for short episodes of pain as a result of medical procedures.[1] Onset of pain relief is rapid and of a short duration.[1] Use is only recommended with direct medical supervision.[2]

Common side effects include anxiety, headache, sleepiness, cough, and nausea.[2] Serious side effects may include kidney problems, liver problems, low blood pressure, and malignant hyperthermia.[2][1] It is unclear if it is safe in either pregnancy or breastfeeding.[2] It is only recommended in those who have a normal level of consciousness and stable blood pressure and heart rate.[1] It is classified as a volatile anaesthetic.[1]

Each dose lasts approximately 30 minutes.[9] Pain relief begins after 6–8 breaths and continues for several minutes after stopping inhalation.[10] The maximum recommended dose is 6 milliliters per day or 15 milliliters per week because of the risk of kidney problems, and it is not recommended to be used on consecutive days.[1] Despite the potential for kidney problems when used at anesthetic doses, no significant adverse effects have been reported when it is used at the lower doses (up to 6 milliliters) used for pain relief.[11][12][13] Due to the risk of kidney toxicity, methoxyflurane is contraindicated in people with pre-existing kidney disease or diabetes mellitus, and is not recommended to be administered in conjunction with tetracyclines or other potentially nephrotoxic or enzyme-inducing drugs.[12]

It is self-administered to children and adults using a hand-held inhaler device.[14][11][15][12] A non-opioid alternative to morphine, it is also easier to use than nitrous oxide.[1] A portable, disposable, single-use inhaler device, along with a single 3 milliliter brown glass vial of methoxyflurane allows people who are conscious and hemodynamically stable (including children over the age of 5 years) to self-administer the medication, under supervision.[1]

The consensus is that the use of methoxyflurane should be restricted only to healthy individuals, in situations where it offers specific advantages and even then, only at dosages less than 2.5 MAC hours.[16][17] The National Institute for Occupational Safety and Health maintains a recommended exposure limit for methoxyflurane as waste anesthetic gas of 2 ppm (13.5 mg/m3) over 60 minutes.[18]

The first report of nephrotoxicity appeared in 1964, when Paddock and colleagues reported three cases of acute kidney injury, two of whom were found to have calcium oxalate crystals in the renal tubules at autopsy.[19] In 1966, Crandell and colleagues reported a series in which 17/95 (18%) of patients developed an unusual type of nephropathy after operations in which methoxyflurane was used as a general anesthetic. This particular type of chronic kidney disease was characterized by vasopressin-resistant high-output kidney failure (production of large volumes of poorly concentrated urine) with a negative fluid balance, pronounced weight loss, elevation of serum sodium, chloride, osmolality and blood urea nitrogen. The urine of these patients was of a relatively fixed specific gravity and an osmolality very similar to that of the serum. Furthermore, the high urine output persisted a challenge test of fluid deprivation. Most cases resolved within 2–3 weeks, but evidence of renal dysfunction persisted for more than one year in 3 of these 17 cases (18%), and more than two years in one case (6%).[20]

Compared with halothane, methoxyflurane produces dose-dependent and abnormalities in kidney function. The authors showed that subclinical nephrotoxicity occurred following methoxyflurane at minimum alveolar concentration (MAC) for 2.5 to 3 hours (2.5 to 3 MAC hours), while overt toxicity was present in all patients at dosages greater than five MAC hours.[16] This study provided a model that would be used for the assessment of the nephrotoxicity of volatile anesthetics for the next two decades.[21] Furthermore, the concurrent use of tetracyclines and methoxyflurane has been reported to result in fatal renal toxicity.[22]

Reports of severe and even fatal hepatotoxicity related to the use of methoxyflurane began to appear in 1966.

Methoxyflurane has a very high lipid solubility (oil:gas partition coefficient of around 950), which gives it very slow pharmacokinetics (induction and emergence characteristics); this being undesirable for routine application in the clinical setting. Initial studies performed in 1961 revealed that in unpremedicated healthy individuals, induction of general anesthesia with methoxyflurane-oxygen alone or with nitrous oxide was difficult or even impossible using the vaporizers available at that time. It was found to be necessary to administer an intravenous anesthetic agent such as sodium thiopental to ensure a smooth and rapid induction. It was further found that after thiopental induction, it was necessary to administer nitrous oxide for at least ten minutes before a sufficient amount of methoxyflurane could accumulate in the bloodstream to ensure an adequate level of anesthesia. This was despite using high flow (liters/minute) of nitrous oxide and oxygen, and with the vaporizers delivering the maximum possible concentration of methoxyflurane.[27]

The effects of methoxyflurane on the circulatory system resemble those of diethyl ether.[28] In dogs, methoxyflurane anesthesia causes a moderate decrease in blood pressure with minimal changes in heart rate, and no significant effect on blood sugar, epinephrine, or norepinephrine. Bleeding and increased arterial partial pressure of carbon dioxide (PaCO2) both induce further decreases in blood pressure, as well as increases in blood glucose, epinephrine and norepinephrine.[29] In humans, methoxyflurane produces some decrease in blood pressure, but cardiac output, stroke volume, and total peripheral resistance are only minimally depressed. Its effect on the pulmonary circulation is negligible, and it does not predispose the heart to cardiac dysrhythmias.[27][30][31][32]

In a series of 500 consecutive pregnant people, vomiting occurred in 12 (4.8%) during or after administration of methoxyflurane anesthesia. These findings compared favorably with those reported for cyclopropane (42%), trichloroethylene (28%), and halothane (4.6%).[33] In another study of 645 obstetric patients, Romagnoli and Korman observed 8 cases (1.2%) of postoperative vomiting, one of whom had been retching before the administration of the drug.[34]

Although the high blood solubility of methoxyflurane is often undesirable, this property makes it useful in certain situations—it persists in the lipid compartment of the body for a long time, providing sedation and analgesia well into the postoperative period.[35][28] There is substantial data to indicate that methoxyflurane is an effective analgesic and sedative agent at subanesthetic doses.[14][11][36][37][38][39][40][41][42][43][44][45][46] Supervised self-administration of methoxyflurane in children and adults can briefly lead to deep sedation,[11] and it has been used as a patient controlled analgesic for painful procedures in children in hospital emergency departments.[15] During childbirth, administration of methoxyflurane produces significantly better analgesia, less psychomotor agitation, and only slightly more somnolence than trichloroethylene.[38]

Similar to other inhalational anesthetics, the exact mechanism of action is not clearly defined and likely involves multiple molecular targets in the brain and spinal cord.[47][48] Methoxyflurane is a positive allosteric modulator of GABAA and glycine receptors as demonstrated in electrophysiology studies.[49][50] This mechanism is shared with alcohols that produce general anesthesia.[51] 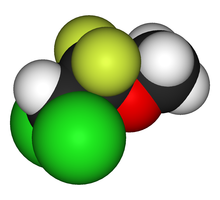 With a molecular formula of C3H4Cl2F2O and a condensed structural formula of CHCl2CF2OCH3, the International Union of Pure and Applied Chemistry (IUPAC) name for methoxyflurane is 2,2-dichloro-1,1-difluoro-1-methoxyethane. It is a halogenated ether in form of a clear, colorless liquid, and its vapor has a strong fruity aroma. It is miscible with ethanol, acetone, chloroform, diethyl ether, and fixed oils. It is soluble in rubber.[9]

With a minimum alveolar concentration (MAC) of 0.16%,[52] methoxyflurane is an extremely potent anesthetic agent. It is a powerful analgesic agent at well below full anesthetic concentrations.[15][53][54][55][35] Because of its low volatility and very high boiling point (104.8 °C at 1 atmosphere), methoxyflurane has a low vapor pressure at ambient temperature and atmospheric pressure. It is therefore quite difficult to vaporize methoxyflurane using conventional anesthetic vaporizers.

The carbon–fluorine bond, a component of all organofluorine compounds, is the strongest chemical bond in organic chemistry.[57] Furthermore, this bond becomes shorter and stronger as more fluorine atoms are added to the same carbon on a given molecule. Because of this, fluoroalkanes are some of the most chemically stable organic compounds.

Methoxyflurane has been used since the 1970s in Australia as an emergency analgesic for short-term use, mostly by the Australian and New Zealand Defence Forces,[14] the Australian ambulance services,[11][36][37] and since 2018 by some Emergency medical services in Germany.[58]

All of the currently used volatile anesthetic agents are organofluorine compounds. Aside from the synthesis of Freon (Thomas Midgley, Jr. and Charles F. Kettering, 1928)[59] and the discovery of Teflon (Roy J. Plunkett, 1938),[60] the field of organofluorine chemistry had not attracted a great deal of attention up to 1940 because of the extreme reactivity of elemental fluorine, which had to be produced in situ for use in chemical reactions. The development of organofluorine chemistry was a spin-off from the Manhattan Project, during which elemental fluorine was produced on an industrial scale for the first time.

The need for fluorine arose from the need to separate the isotope 235U from 238U because the former, present in natural uranium at a concentration of less than 1% is fissile (capable of sustaining a nuclear chain reaction of nuclear fission with thermal neutrons),[61] whereas the latter is not. Members of the MAUD Committee (especially Francis Simon and Nicholas Kurti) proposed the use of gaseous diffusion for isotope separation, since, according to Graham's law the rate of diffusion is inversely proportional to molecular mass.[62] After an extensive search, uranium hexafluoride, UF6, was determined to be the most suitable compound of uranium to be used for the gaseous diffusion process.[63] Elemental fluorine is needed in the production of UF6.

Obstacles had to be overcome in the handling of both fluorine and UF6. Before the K-25 gaseous diffusion plant could be built, it was first necessary to develop non-reactive chemical compounds that could be used as coatings, lubricants and gaskets for the surfaces which would come into contact with the UF6 gas (a highly reactive and corrosive substance). William T. Miller,[64] professor of organic chemistry at Cornell University, was co-opted to develop such materials, because of his expertise in organofluorine chemistry. Miller and his team developed several novel non-reactive chlorofluorocarbon polymers that were used in this application.

Miller and his team continued to develop organofluorine chemistry after the end of World War II and methoxyflurane was made in 1948.[65]

In 1968, Robert Wexler of Abbott Laboratories developed the Analgizer, a disposable inhaler that allowed the self-administration of methoxyflurane vapor in air for analgesia.[66] The Analgizer consisted of a polyethylene cylinder 5 inches long and 1 inch in diameter with a 1 inch long mouthpiece. The device contained a rolled wick of polypropylene felt which held 15 milliliters of methoxyflurane. Because of the simplicity of the Analgizer and the pharmacological characteristics of methoxyflurane, it was easy for patients to self-administer the drug and rapidly achieve a level of conscious analgesia which could be maintained and adjusted as necessary over a period of time lasting from a few minutes to several hours. The 15 milliliter supply of methoxyflurane would typically last for two to three hours, during which time the user would often be partly amnesic to the sense of pain; the device could be refilled if necessary.[41] The Analgizer was found to be safe, effective, and simple to administer in obstetric patients during childbirth, as well as for patients with bone fractures and joint dislocations,[41] and for dressing changes on burn patients.[40] When used for labor analgesia, the Analgizer allows labor to progress normally and with no apparent adverse effect on Apgar scores.[41] All vital signs remain normal in obstetric patients, newborns, and injured patients.[41] The Analgizer was widely utilized for analgesia and sedation until the early 1970s, in a manner that foreshadowed the patient-controlled analgesia infusion pumps of today.[38][39][42][43] The Analgizer inhaler was withdrawn in 1974, but use of methoxyflurane as a sedative and analgesic continues in Australia and New Zealand in the form of the Penthrox inhaler.[14][11][15][12] Trials of methoxyflurane as an analgesic in emergency medicine are going on in the UK.