This article is about the plant. For the book by Lemony Snicket, see Horseradish: Bitter Truths You Can't Avoid. For Horseradish tree, see Moringa oleifera.
species of flowering plants in the cabbage family Brassicaceae 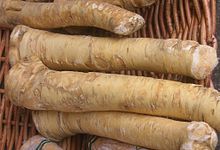 Sections of roots of the horseradish plant 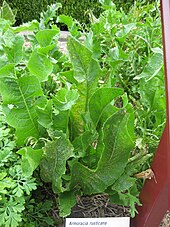 Foliage of the horseradish plant

Horseradish (Armoracia rusticana, syn. Cochlearia armoracia) is a perennial plant of the family Brassicaceae (which also includes mustard, wasabi, broccoli, cabbage, and radish). It is a root vegetable, cultivated and used worldwide as a spice and as a condiment. The species is probably native to southeastern Europe and western Asia.

Horseradish grows up to 1.5 meters (4.9 feet) tall, with hairless bright green unlobed leaves up to a metre long that may be mistaken for docks (Rumex).[2]:423 It is cultivated primarily for its large, white, tapered root.[3][4][5][6] The white four-petalled flowers are scented and are borne in dense panicles.[2] Established plants may form extensive patches[2] and may become invasive unless carefully managed.[7]

Intact horseradish root has little aroma. When cut or grated, enzymes from within the plant cells digest sinigrin (a glucosinolate) to produce allyl isothiocyanate (mustard oil), which irritates the mucous membranes of the sinuses and eyes. Once exposed to air or heat, horseradish loses its pungency, darkens in color, and develops a bitter flavor.

Horseradish is probably indigenous to temperate Eastern Europe, where its Slavic name khren seemed to Augustin Pyramus de Candolle more primitive than any Western synonym. Horseradish has been cultivated since antiquity.[8] According to Greek mythology, the Delphic Oracle told Apollo that the horseradish was worth its weight in gold.[9] Dioscorides listed horseradish equally as Persicon sinapi (Diosc. 2.186) or Sinapi persicum (Diosc. 2.168),[10] which Pliny's Natural History reported as Persicon napy;[11] Cato discusses the plant in his treatises on agriculture, and a mural in Pompeii shows the plant. Horseradish is probably the plant mentioned by Pliny the Elder in his Natural History under the name of Amoracia, and recommended by him for its medicinal qualities, and possibly the wild radish, or raphanos agrios of the Greeks. The early Renaissance herbalists Pietro Andrea Mattioli and John Gerard showed it under Raphanus.[12] Its modern Linnaean genus Armoracia was first applied to it by Heinrich Bernhard Ruppius, in his Flora Jenensis, 1745, but Linnaeus himself called it Cochlearia armoracia.

Both root and leaves were used as a traditional medicine during the Middle Ages. The root was used as a condiment on meats in Germany, Scandinavia, and Britain. It was introduced to North America during European colonialization;[13] both George Washington and Thomas Jefferson mention horseradish in garden accounts.[14]

William Turner mentions horseradish as Red Cole in his "Herbal" (1551–1568), but not as a condiment. In The Herball, or Generall Historie of Plantes (1597), John Gerard describes it under the name of raphanus rusticanus, stating that it occurs wild in several parts of England. After referring to its medicinal uses, he says:

[T]he Horse Radish stamped with a little vinegar put thereto, is commonly used among the Germans for sauce to eat fish with and such like meats as we do mustard.[15]

The word horseradish is attested in English from the 1590s. It combines the word horse (formerly used in a figurative sense to mean strong or coarse) and the word radish.[16]

In Central and Eastern Europe, horseradish is called khren, hren and ren (in various spellings like kren) in many Slavic languages, in Austria, in parts of Germany (where the other German name Meerrettich is not used), in North-East Italy, and in Yiddish (כריין transliterated as khreyn). It is common in Ukraine (under the name of хрін, khrin), in Belarus (under the name of хрэн, chren), in Poland (under the name of chrzan), in the Czech Republic (křen), in Slovakia (chren), in Russia (хрен, khren), in Hungary (torma), in Romania (hrean), in Lithuania (krienai), and in Bulgaria (under the name of хрян). 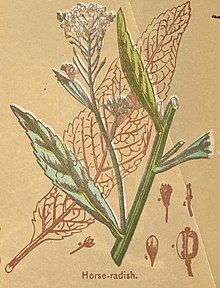 Horseradish, from The Book of Health, 1898, by Henry Munson Lyman

Horseradish is perennial in hardiness zones 2–9 and can be grown as an annual in other zones, although not as successfully as in zones with both a long growing season and winter temperatures cold enough to ensure plant dormancy. After the first frost in autumn kills the leaves, the root is dug and divided. The main root is harvested and one or more large offshoots of the main root are replanted to produce next year's crop. Horseradish left undisturbed in the garden spreads via underground shoots and can become invasive. Older roots left in the ground become woody, after which they are no longer culinarily useful, although older plants can be dug and re-divided to start new plants.[13] The early season leaves can be distinctively different, asymmetric spiky, before the mature typical flat broad leaves start to be developed.

Widely introduced by accident, "cabbageworms", the larvae of Pieris rapae, the small white butterfly, are a common caterpillar pest in horseradish. The adults are white butterflies with black spots on the forewings that are commonly seen flying around plants during the day. The caterpillars are velvety green with faint yellow stripes running lengthwise down the back and sides. Full grown caterpillars are about 1-inch (25 mm) in length. They move sluggishly when prodded. They overwinter in green pupal cases. Adults start appearing in gardens after the last frost and are a problem through the remainder of the growing season. There are three to five overlapping generations a year. Mature caterpillars chew large, ragged holes in the leaves leaving the large veins intact. Handpicking is an effective control strategy in home gardens.[17]

Allyl isothiocyanate is the pungent ingredient in fresh horseradish sauce. 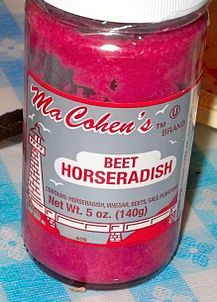 A bottle of Heinz horseradish sauce

Horseradish sauce made from grated horseradish root and vinegar is a common condiment in the United Kingdom and in Poland.[20] In the UK, it is usually served with roast beef, often as part of a traditional Sunday roast, but can be used in a number of other dishes, including sandwiches or salads. A variation of horseradish sauce, which in some cases may substitute the vinegar with other products like lemon juice or citric acid, is known in Germany as Tafelmeerrettich. Also common in the UK is Tewkesbury mustard, a blend of mustard and grated horseradish originating in medieval times and mentioned by Shakespeare (Falstaff says: "his wit's as thick as Tewkesbury Mustard" in Henry IV Part II[21]). A similar mustard, called Krensenf or Meerrettichsenf, is common in Austria and parts of Germany. In France, sauce au raifort is used in Alsatian cuisine. In Russia horseradish root is usually mixed with grated garlic and small amount of tomatoes for color.

In the US, the term "horseradish sauce" refers to grated horseradish combined with mayonnaise or salad dressing. Prepared horseradish is a common ingredient in Bloody Mary cocktails and in cocktail sauce, and is used as a sauce or sandwich spread. Horseradish cream is a mixture of horseradish and sour cream and is served with au jus for a prime rib dinner.[citation needed]

In Europe, there are two varieties of khreyn. "Red" khreyn is mixed with red beetroot and "white" khreyn contains no beetroot. Khreyn is a part of Christian Easter and Jewish Passover tradition (as maror) in Eastern and Central Europe.

Outside Japan, the Japanese condiment wasabi, although traditionally prepared from the true wasabi plant (Wasabia japonica), is now usually made with horseradish due to the scarcity of the wasabi plant.[28] The Japanese botanical name for horseradish is seiyōwasabi (セイヨウワサビ, 西洋山葵), or "Western wasabi". Both plants are members of the family Brassicaceae.

In a 100-gram amount, prepared horseradish provides 48 calories and has high content of vitamin C with moderate content of sodium, folate and dietary fiber, while other essential nutrients are negligible in content.[29] In a typical serving of one tablespoon (15 grams), horseradish supplies no significant nutrient content.[29]

The enzyme horseradish peroxidase (HRP), found in the plant, is used extensively in molecular biology and biochemistry primarily for its ability to amplify a weak signal and increase detectability of a target molecule.[30] HRP has been used in decades of research to visualize under microscopy and assess non-quantitatively the permeability of capillaries, particularly those of the brain.[31]