An organism that has complete or partial male and female reproductive organs
For other uses, see Hermaphrodite (disambiguation). 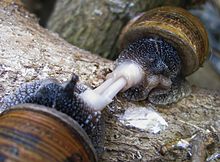 In biology, a hermaphrodite (/hɜːrˈmæfrədaɪt/) is an organism that has complete or partial reproductive organs and produces gametes normally associated with both male and female sexes.[1] Many taxonomic groups of animals (mostly invertebrates) do not have separate sexes.[2] In these groups, hermaphroditism is a normal condition, enabling a form of sexual reproduction in which either partner can act as the "female" or "male". For example, the great majority of tunicates, pulmonate snails, opisthobranch snails, earthworms, and slugs are hermaphrodites. Hermaphroditism is also found in some fish species and to a lesser degree in other vertebrates. Most plants are also hermaphrodites.

Historically, the term hermaphrodite has also been used to describe ambiguous genitalia and gonadal mosaicism in individuals of gonochoristic species, especially human beings. The word intersex has come into usage for humans, since the word hermaphrodite is considered to be misleading and stigmatizing,[3][4] as well as "scientifically specious and clinically problematic."[5]

The term derives from the Latin: hermaphroditus, from Ancient Greek: ἑρμαφρόδιτος, romanized: hermaphroditos,[7] which derives from Hermaphroditus (Ἑρμαφρόδιτος), the son of Hermes and Aphrodite in Greek mythology. According to Ovid, he fused with the nymph Salmacis resulting in one individual possessing physical traits of male and female sexes;[8] according to the earlier Diodorus Siculus, he was born with a physical body combining male and female sexes.[9] The word hermaphrodite entered the English lexicon as early as the late fourteenth century.[10] Alexander ab Alexandro stated, using the term hermaphrodite, that the people who bore the sexes of both man and woman were regarded by the Athenians and the Romans as monsters, and thrown into the sea at Athens and into the Tiber at Rome.[11] 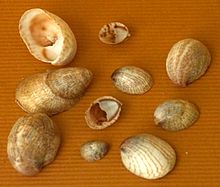 Clownfish are initially male; the largest fish in a group becomes a female. 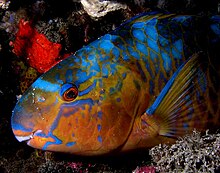 Most species of parrotfish start life as females and later change into males.

Sequential hermaphrodites can be divided into three broad categories:

Dichogamy can have both conservation-related implications for humans, as mentioned above, as well as economic implications. For instance, groupers are favoured fish for eating in many Asian countries and are often aquacultured. Since the adults take several years to change from female to male, the broodstock are extremely valuable individuals.

Turbellarians mating by penis fencing. Each has two penises on the undersides of their heads which they use to inject sperm.

Earthworms are simultaneous hermaphrodites, having both male and female reproductive organs.

A simultaneous (or synchronous) hermaphrodite (or homogamous) is an adult organism that has both male and female sexual organs at the same time.[12] Self-fertilization often occurs. 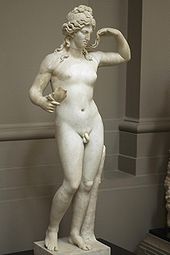 Hermaphroditus, the "son" of the Greek god Hermes and the goddess Aphrodite, origin of the word "hermaphrodite" 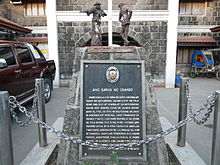 The Obando Fertility Rites in the Philippines, before becoming a Catholic festival, was initially an Anitist ritual dedicated to the hermaphrodite deity, Lakapati, who presided over fertility.[24]

1860 photograph by Nadar of an intersex person displaying genitalia, one of a nine-part series. The series may be the earliest medical photographic documentation of intersex.[25]

Hermaphrodite is used in older literature to describe any person whose physical characteristics do not neatly fit male or female classifications, but some people advocate to replace the term with intersex.[26][27] Intersex describes a wide variety of combinations of what are considered male and female biology. Intersex biology may include, for example, ambiguous-looking external genitalia, karyotypes that include mixed XX and XY chromosome pairs (46XX/46XY, 46XX/47XXY or 45X/XY mosaic).

Clinically, medicine currently describes intersex people as having disorders of sex development, a term vigorously contested.[28][29] This is particularly because of a relationship between medical terminology and medical intervention.[30] Intersex civil society organizations, and many human rights institutions,[31][32] have criticized medical interventions designed to make intersex bodies more typically male or female.

Some people who are intersex, such as some of those with androgen insensitivity syndrome, outwardly appear completely female or male, frequently without realizing they are intersex. Other kinds of intersex conditions are identified immediately at birth because those with the condition have a sexual organ larger than a clitoris and smaller than a penis.

Some humans were historically termed true hermaphrodites if their gonadal tissue contained both testicular and ovarian tissue, or pseudohermaphrodites if their external appearance (phenotype) differed from sex expected from internal gonads. This language has fallen out of favor due to misconceptions and pejorative connotations associated with the terms,[33] and also a shift to nomenclature based on genetics.

Intersex is in some caused by unusual sex hormones; the unusual hormones may be caused by an atypical set of sex chromosomes. One possible pathophysiologic explanation of intersex in humans is a parthenogenetic division of a haploid ovum into two haploid ova. Upon fertilization of the two ova by two sperm cells (one carrying an X chromosome and the other carrying a Y chromosome), the two fertilized ova are then fused together resulting in a person having dual genitalial, gonadal (ovotestes) and genetic sex. Another common cause of being intersex is the crossing over of the SRY from the Y chromosome to the X chromosome during meiosis. The SRY is then activated in only certain areas, causing development of testes in some areas by beginning a series of events starting with the upregulation of SOX9, and in other areas not being active (causing the growth of ovarian tissues). Thus, testicular and ovarian tissues will both be present in the same individual.[34]

Fetuses before sexual differentiation are sometimes described as female by doctors explaining the process.[35] This is technically not true. Before this stage, humans are simply undifferentiated and possess a Müllerian duct, a Wolffian duct, and a genital tubercle.

Hylocereus undatus, a hermaphrodite plant with both carpels and stamens.

Hermaphrodite is used in botany to describe a flower that has both staminate (male, pollen-producing) and carpellate (female, ovule-producing) parts. This condition is seen in many common garden plants. A closer analogy to hermaphroditism in botany is the presence of separate male and female flowers on the same individual—such plants are called monoecious. Monoecy is especially common in conifers, but occurs in only about 7% of angiosperm species.[36] The condition also occurs in some algae.[37] In addition, some plants can change their sex throughout their lifetime. This process is called Sequential hermaphroditism.

Hermaphroditic life forms in fiction include the Hutts in Star Wars (as elaborated in spin-off novels), Hermats in Peter David's Star Trek: New Frontier series, and Asari in the Mass Effect game. The Trill symbionts in Star Trek are also notable as a species that melds with hosts of either sex.[citation needed]