Scorched rice, also known as crunchy rice, is a thin crust of slightly browned rice at the bottom of the cooking pot. It is produced during the cooking of rice over direct heat from a flame.

Guōbā (simplified Chinese: 锅巴; traditional Chinese: 鍋巴; pinyin: guō bā) is eaten as a snack, used as an ingredient in dishes with thick sauces, or served in soups and stews.

Guoba (lit. "pan adherents"), sometimes known as mi guoba (米鍋巴, lit. rice guoba) is a Chinese food ingredient consisting of scorched rice. Traditionally guoba forms during the boiling of rice over direct heat from a flame. This results in the formation of a crust of scorched rice on the bottom of the wok or cooking vessel. This scorched rice has a firm and crunchy texture with a slight toasted flavour, and is sometimes eaten as a snack.

Guoba is also used as an ingredient in many Chinese dishes with thick sauces, since the bland taste of the scorched rice takes on the flavour of the sauces. Guoba is also served in soups and stews and prominently featured in Sichuan cuisine. Since demand for guoba outstrips traditional production and modern ways of cooking rice (in electric rice cookers) do not produce it, guoba has been commercially manufactured since the late 20th century.[citation needed] 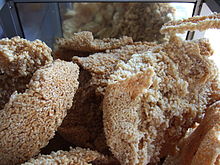 In Indonesia, especially Central Java, scorched rice is called intip. It is a specialty of the Wonogiri Regency area and served as a cracker. The rice cracker is made from the hardened semi-burnt rice that sticks to the inner bottom of rice-cooking vessels. These cooking vessels are filled with water to loosen up the stuck rice. After it is separated from the cooking vessel, the stuck rice is sun-dried until it loses all of its liquid contents. The dried sticky rice is later deep-fried to create a crispy rice cracker.

In Indonesia there is a similar rice cracker called rengginang. Unlike intip, however, it is not made from scorched rice salvaged from the bottom of a rice cooking vessel, but created separately from steamed sticky rice, boiled, seasoned, made into a flat and rounded shape, and sun-dried prior to deep-frying.[1]

Rice, bread or potato crust from the bottom of the pot is called tahdig in Iran. Tahdig (Persian: ته دیگ‎, tah "bottom" + dīg "pot") is a specialty of Iranian cuisine consisting of crisp, caramelized[2] rice taken from the bottom of the pot in which the rice (chelow) is cooked.[3] It is traditionally served to guests at a meal.[4] Ingredients commonly added to tahdig include yogurt and saffron, bread, potato, tomato, and fruits such as sour cherry.

Variations of tahdig include placing thin vegetable slices at the bottom of the pot, so they crisp up instead of the rice; these vegetables include potato, carrots, and lettuce.[5] Iranians sometimes apply this cooking method to spaghetti as well, providing a hardened base.[6]

A traditional kamado in a Japanese museum

Okoge (お焦げ) is eaten with vegetables or moistened with water, soup, or tea. Okoge (お焦げ, おこげ) is Japanese food, usually rice, that has been scorched or blackened.

Until electric rice cookers came into common use in the 20th century, rice in Japan was cooked in a kamado, a traditional stove heated by wood or charcoal. Because regulating the heat of a wood or charcoal fire is more difficult, a layer of rice at the bottom of the pot would often be slightly burned during cooking; this layer, called okoge, was not discarded, but was eaten with vegetables or moistened with water, soup, or tea.

Okoge is still eaten in Japanese cuisine, and is an important part of the kaiseki meal served at tea ceremonies, where it is typically served with hot water and pickles as the final course. It has a crispy texture and a nutty flavour.

Because the cooking temperature of modern electric rice cookers is precisely controlled, okoge does not usually form naturally during the cooking process. However, there are rice cookers on the market in Japan that have an okoge setting. Okoge can also be made by scorching cooked rice in a frying pan.

Nurungji (누룽지) is eaten as a snack, infused in hot water to make sungnyung (scorched rice tea), or reboiled in water to make Nureun bap.

Nurungji[8] (hangul: 누룽지) or scorched rice[8] is a traditional Korean food made of scorched rice. After boiling and serving rice, a thin crust of scorched rice will usually be left in the bottom of the cooking pot. This yellowed scorched state is described as nureun (눌은) in Korean;nurungji derives from this adjective.[9]

Nurungji can be eaten in its crisp state as a snack or as an after meal rice tea by adding hot water,[10] or reboiled with water to make nureun bap (눌은밥) or nurungji bap (누룽지밥).[11] Nurungji in its broad sense also refers to the crisp crust that forms at the bottom of the pots and pans when cooking various rice dishes such as dolsot bibimbap (돌솥 비빔밥) and bokkeumbap.

Nurungji is traditionally known for its medicinal attributes. According to records in the 17th century medical book Dongui Bogam, nurungji was called chwigunban (취건반, 炊乾飯) and considered as a remedy "when food does not swallow easily, upsets the stomach and induces vomiting".[12] It is also being lauded as a well-being (sic) food in South Korea.[13]

South Korean companies made nurungji available in a various pre-packaged forms around the mid-2000s.[13] Besides sweet fried nurungji snacks and instant nurungji to make nureunbap, many nurungji flavor products were also developed such as candies and tea.[14] Nurungi is also being used as an ingredient for a variety of new dishes like nurungji baeksuk and nurungji pizza.[13]

Mentions of nurungji in folklore are common, the most famous being a folk song recognizing the difficulties of memorizing the Thousand Character Classic. The lines are changed from the original chant to a clever rhyme that loosely translates into "sky cheon (天), earth ji (地), nurungji in the gamasot (cauldron pot)". (Korean: "하늘 천, 땅 지, 가마 솥에 누룽지").[15]

Tutong (Tagalog) or dukót (Cebuano, "to stick") is used for a wide variety of dishes in Philippine cuisine, even as flavouring for ice cream.[19][20] Some people may consider it a poverty food, but others eat it because they enjoy the taste.[21][22]

Socarrat can also refer to the crust that forms on the bottom of the pan when cooking paella.[2]

In Vietnamese cuisine, it is called cơm cháy (literally "scorched rice"). It is typically fried in oil until golden brown, then topped with chà bông (pork floss) or tôm khô (dried shrimp), mỡ hành (chopped scallions cooked by pouring boiling oil over them to release their aroma), and chili paste to produce a popular dish called cơm cháy chà bông or cơm cháy tôm khô (although both the pork and shrimp may be used, in which case the dish is called cơm cháy chà bông tôm khô or cơm cháy tôm khô chà bông). Cơm cháy may be made from the crust of rice left over from cooking rice in an iron pot, or, more commonly since the advent of electric rice cookers in the late 20th century, from leftover rice that is fried in oil over high heat to acquire a crispy texture.