Fenugreek (/ˈfɛnjʊɡriːk/; Trigonella foenum-graecum) is an annual plant in the family Fabaceae, with leaves consisting of three small obovate to oblong leaflets. It is cultivated worldwide as a semiarid crop. Its seeds and leaves are common ingredients in dishes from the Indian subcontinent. Also used in traditional medicine, fenugreek can increase the risk for serious medical side effects, though its culinary use (in smaller quantities) is usually believed to be safe.[2][3] Fenugreek is not approved or recommended for clinical use by any governmental health agency.[3][4]

Fenugreek is believed to have been brought into cultivation in the Near East. It is uncertain which wild strain of the genus Trigonella gave rise to domesticated fenugreek. Charred fenugreek seeds have been recovered from Tell Halal, Iraq (carbon dated to 4000 BC), and Bronze Age levels of Lachish and desiccated seeds from the tomb of Tutankhamen.[5] Cato the Elder lists fenugreek with clover and vetch as crops grown to feed cattle.[6]

In one first-century A.D. recipe, the Romans flavoured wine with fenugreek.[7] In the 1st century AD, in Galilee, it was grown as a staple food, as Josephus mentions it in his book, the Wars of the Jews.[8] The plant is mentioned in the 2nd-century compendium of Jewish Oral Law (Mishnah) under its Hebrew name tiltan.[9]

India is a major producer, with fenugreek production in India derived from numerous states. Rajasthan accounts for over 80% of India's output.[11] 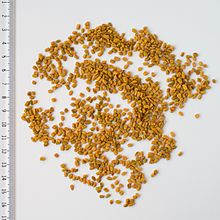 Fenugreek is used as a herb (dried or fresh leaves), spice (seeds), and vegetable (fresh leaves, sprouts, and microgreens). Sotolon is the chemical responsible for the distinctive maple syrup smell of fenugreek.[12][3]

Cuboid-shaped, yellow- to amber-coloured fenugreek seeds are frequently encountered in the cuisines of the Indian subcontinent, used both whole and powdered in the preparation of pickles, vegetable dishes, dal, and spice mixes such as panch phoron and sambar powder. They are often roasted to reduce inherent bitterness and to enhance flavour.[13]

Fresh fenugreek leaves are an ingredient in some curries, such as with potatoes in cuisines of the Indian subcontinent to make "aloo methi" ("potato fenugreek") curry.[14] Sprouted seeds and fenugreek greens are used in salads. When harvested as greens, fenugreek is known as samudra methi in Maharashtra, especially in and around Mumbai, where it is often grown in sandy tracts near the sea, hence the name samudra, "ocean" in Sanskrit. Samudra methi is also grown in dry river beds in the Gangetic plains. When sold as a vegetable, the young plants are harvested with their roots still attached and sold in small bundles in the markets and bazaars.[citation needed]

In Turkish cuisine, fenugreek seeds are used for making a paste known as çemen. Cumin, black pepper, and other spices are added into it, especially to make pastırma.

In Iranian cuisine, fenugreek leaves are called shanbalileh. They are one of several greens incorporated into the herb stew ghormeh sabzi, the herb frittata kuku sabzi and a soup known as eshkeneh.

In Egyptian cuisine, fenugreek is known by the Arabic name hilba or helba حلبة. Seeds are boiled to make a drink that is consumed at home, as well as in coffee shops.[15] Peasants in Upper Egypt add fenugreek seeds and maize to their pita bread to produce aish merahrah, a staple of their diet. Basterma, a cured dried beef, has its distinctive flavour from the fenugreek used as a coating.[16]

Fenugreek is used in Eritrean and Ethiopian cuisine.[17] The word for fenugreek in Amharic is abesh (or abish), and the seed is used in Ethiopia as a natural herbal medicine in the treatment of diabetes.[17]

Yemenite Jews following the interpretation of Rabbi Shelomo Yitzchak (Rashi) believe fenugreek, which they call hilbah, hilbeh, hilba, helba, or halba "חילבה", to be the Talmudic rubia "רוביא". When the seed kernels are ground and mixed with water they greatly expand; hot spices, turmeric and lemon juice are added to produce a frothy relish eaten with a sop. The relish is also called hilbeh;[18] it is reminiscent of curry. It is eaten daily and ceremonially during the meal of the first and/or second night of the Jewish New Year, Rosh Hashana.[19]

Although once a folk remedy for an insufficient milk supply when nursing, there is no good evidence that fenugreek is effective or safe for this use.[3] Fenugreek may affect uterine contractions and be unsafe for women with hormone-sensitive cancers.[4] Fenugreek is likely not safe for use during pregnancy as it may have abortifacient effects.[2]

Some people are allergic to fenugreek, including those with peanut allergies or chickpea allergies.[2][3] Fenugreek seeds can cause diarrhea, dyspepsia, abdominal distention, flatulence, perspiration, and a maple-like smell to sweat, urine or breast milk.[2][3][4] There is a risk of hypoglycemia particularly in people with diabetes, and it may interfere with the activity of anti-diabetic drugs.[2][3] Because of the high content of coumarin-like compounds in fenugreek, it may interfere with the activity and dosing of anticoagulants and antiplatelet drugs.[2][3]

Fenugreek sprouts, cultivated from a single specific batch of seeds imported from Egypt into Germany in 2009, were implicated as the source of the 2011 outbreak of Escherichia coli O104:H4 in Germany and France.[20] Identification of a common producer and a single batch of fenugreek seeds was evidence for the origin of the outbreaks.[21]

Fenugreek dietary supplements are manufactured from powdered seeds into capsules, loose powders, teas, and liquid extracts in many countries.[3][4] Powders may also be used as a topical medication or dressing for skin wounds or eczema.[3] There is little high-quality evidence that these products have any clinical effectiveness.[3][4]

Fenugreek is sometimes used as animal feed. It provides a green fodder palatable to ruminants. The seeds are also used to feed fish, domestic rabbits and ruminants. [22]

Fenugreek seeds and leaves contain the molecule sotolone, which imparts the aroma of fenugreek and curry in high concentrations, and maple syrup or caramel in lower concentrations.[12][3] Fenugreek is used as a flavoring agent in imitation maple syrup or tea, and as a dietary supplement.[4]

A mysterious odor of maple syrup – the maple syrup event occurring in New York City in 2005 – was eventually traced to a nearby New Jersey factory of a food additives company processing fenugreek seeds.[23]

Constituents of fenugreek seeds include flavonoids, alkaloids, coumarins, vitamins, and saponins; the most prevalent alkaloid is trigonelline and coumarins include cinnamic acid and scopoletin.[2] Research into whether fenugreek reduces biomarkers in people with diabetes and with pre-diabetic conditions is of limited quality.[24] As of 2016, there was no high-quality evidence for whether fenugreek is safe and effective to relieve dysmenorrhea.[25]

Because research on potential biological effects of consuming fenugreek has provided no high-quality evidence for health or anti-disease effect, fenugreek is not approved or recommended for clinical use by any governmental health agency.[3][4]