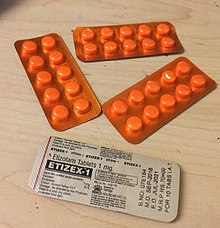 Etizolam (marketed under many brand names) is a thienodiazepine derivative[6] which is a benzodiazepine analog.[7] The etizolam molecule differs from a benzodiazepine in that the benzene ring has been replaced by a thiophene ring and triazole ring has been fused, making the drug a thienotriazolodiazepine.[8][9] It possesses amnesic, anxiolytic, anticonvulsant, hypnotic, sedative and skeletal muscle relaxant properties.[10]

Long term use may result in blepharospasms.[14] Doses of 4 mg or more may cause anterograde amnesia.[citation needed]

In a study that compared the effectiveness of etizolam, alprazolam, and bromazepam for the treatment of generalized anxiety disorder, all three drugs retained their effectiveness over 2 weeks, but etizolam became more effective from 2 weeks to 4 weeks, a type of reverse tolerance.[19] Administering .5 mg etizolam twice daily did not induce cognitive deficits over 3 weeks when compared to placebo.[20]

When multiple doses of etizolam, or lorazepam, were administered to rat neurons, lorazepam caused downregulation of alpha-1 benzodiazepine binding sites (tolerance/dependence), while etizolam caused an increase in alpha-2 benzodiazepine binding sites (reverse tolerance to anti-anxiety effects).[21] Tolerance to the anticonvulsant effects of lorazepam was observed, but no significant tolerance to the anticonvulsant effects of etizolam was observed.[21] Etizolam therefore has a reduced liability to induce tolerance, and dependence, compared with classic benzodiazepines.[21]

Etizolam, a thienodiazepine derivative, is absorbed fairly rapidly, with peak plasma levels achieved between 30 minutes and 2 hours. It has a mean elimination half life of about 3.5 hours.[22] Etizolam possesses potent hypnotic properties,[23] and is comparable with other short-acting benzodiazepines.[22] Etizolam acts as a full agonist at the benzodiazepine receptor to produce its range of therapeutic and adverse effects.[24]

According to the Italian P.I. sheet[citation needed], etizolam belongs to a new class of diazepines, thienotriazolodiazepines. This new class is easily oxidized, rapidly metabolized, and has a lower risk of accumulation, even after prolonged treatment. Etizolam has an anxiolytic action about 6 times greater than that of diazepam. Etizolam produces, especially at higher dosages, a reduction in time taken to fall asleep, an increase in total sleep time, and a reduction in the number of awakenings. During tests, there were no substantial changes in deep sleep; however, it may reduce REM sleep. In EEG tests of healthy volunteers, etizolam showed some similar characteristics to tricyclic antidepressants.[4]

Cases of intentional suicide by overdose using etizolam in combination with GABA agonists have been reported.[25][29] Although etizolam has a lower LD50 than certain benzodiazepines, the LD50 is still far beyond the prescribed or recommended dose. Flumazenil, a GABA antagonist agent used to reverse benzodiazepine overdoses, inhibits the effect of etizolam as well as classical benzodiazepines such as diazepam and chlordiazepoxide.[30]

Etizolam overdose deaths are rising - for instance, the National Records of Scotland report on drug-related deaths, implicated 548 deaths from 'street' Etizolam in 2018, almost double the number from 2017 (299) and only six years from the first recorded death (in 2012). The 548 deaths were 45% of all drug-related deaths in Scotland in 2018.[31]

On December 13th 2019, the World Health Organization recommended Etizolam be placed in Schedule 4 of the 1971 Convention on Psychotropic Substances.[32]

Etizolam is a Schedule 4 substance under the Poisons Standard June 2018 as it is classed as a benzodiazepine derivative.[33] A schedule 4 drug is outlined in the Poisons Act 1964 as "Substances, the use or supply of which should be by or on the order of persons permitted by State or Territory legislation to prescribe and should be available from a pharmacist on prescription."[33]

Etizolam is controlled in Denmark under the Danish Misuse of Drugs Act.[34]

Etizolam is licensed for the treatment of anxiety, insomnia and neurosis as a prescription-only medication.[37]

Etizolam also called Depas, is restricted as a benzodiazepine analog in Japan from October 2016 onwards.

In the UK, etizolam has been classified as a Class C drug by the May 2017 amendment to The Misuse of Drugs Act 1971 along with several other designer benzodiazepine drugs.[38]

Etizolam is not authorized by the FDA for medical use in the U.S. However, it currently remains unscheduled at the federal level and is legal for research purposes. As of March 2016, etizolam is a controlled substance in the following states: Alabama,[39] Arkansas,[40] Florida,[41] Georgia (as Schedule IV, whereas all other states listed here prohibit it as a Schedule I substance), Louisiana, Mississippi,[42] Texas,[43] South Carolina,[1] and Virginia.[44] It is controlled in Indiana as of July 1, 2017.[3] It is controlled in Ohio as of February 2018.

Etizolam is a drug of potential misuse. Cases of etizolam dependence have been documented in the medical literature.[45] However, conflicting reports from the World Health Organization, made public in 1991, dispute the misuse claims.[46] Since 1991, cases of etizolam misuse and addiction have substantially increased,[47] due to varying levels of accessibility and cultural popularity.[48]