Type of fat derived from glycerol and two fatty acids 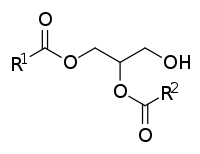 Diglycerides are a minor component of many seed oils and are normally present at ~1–6%; or in the case of cottonseed oil as much as 10%.[4] Industrial production is primarily achieved by a glycerolysis reaction between triglycerides and glycerol. The raw materials for this may be either vegetable or animal fats and oils.[5]

Diglycerides, generally in a mix with monoglycerides (E471), are common food additives largely used as emulsifiers. The values given in the nutritional labels for total fat, saturated fat, and trans fat do not include those present in mono- and diglycerides[citation needed]. They often are included in bakery products, beverages, ice cream, peanut butter, chewing gum, shortening, whipped toppings, margarine, confections, candies, and Pringles potato chips.