Aulus Cornelius Celsus (c. 25 BC – c. 50 AD) was a Roman encyclopaedist, known for his extant medical work, De Medicina, which is believed to be the only surviving section of a much larger encyclopedia. The De Medicina is a primary source on diet, pharmacy, surgery and related fields, and it is one of the best sources concerning medical knowledge in the Roman world. The lost portions of his encyclopedia likely included volumes on agriculture, law, rhetoric, and military arts. He made contributions to the classification of human skin disorders in dermatology, such as Myrmecia, and his name is often occurring in medical terms about the skin, e.g., kerion celsi and area celsi.[1]

Nothing is known about the life of Celsus. Even his praenomen is uncertain; he has been called both Aurelius and Aulus, with the latter being more plausible.[2] Some incidental expressions in his De Medicina suggest that he lived under the reigns of Augustus and Tiberius; which is confirmed by his reference to the Greek physician Themison as being recently in his old age.[3]

It is not known with any certainty where he lived. He has been identified as the possible dedicator of a gravestone in Rome, but it has also been supposed that he lived in Narbonese Gaul, because he refers to a species of vine (marcum) which, according to Pliny,[4] was native to that region.[5]

It is doubtful whether he practised medicine himself, and although Celsus seems to describe and recommend his own medical observations sanctioned by experience, Quintilian says that his volumes included all sorts of literary matters, and even agriculture and military tactics.[6] 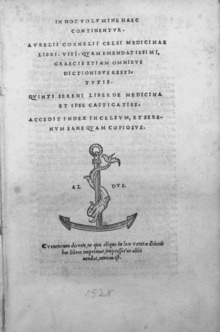 Of the numerous volumes of his encyclopedia, only one remains intact, his celebrated treatise On Medicine (De Medicina). "The work’s encyclopedic arrangement follows the tripartite division of medicine at the time as established by Hippocrates and Asclepiades — diet, pharmacology, and surgery."[7] It is divided into eight books.

In the "Prooemium" or introduction to De Medicina there is an early discussion of the relevance of theory to medical practice and the pros and cons of both animal experimentation and human experimentation. Celsus discusses, for example, the case of Herophilos and Erasistratos, who he asserts practised vivisection.[9]

In the treatment of disease, Celsus' principal method was to observe and watch over the operations of Nature, and to regulate rather than oppose them, conceiving that fever consisted essentially in an effort of the body to throw off some morbid cause, and that, if not unduly interfered with, the process would terminate in a state of health. On occasions, however, he boldly recommends the use of the scalpel; his rules for blood letting and purgatives are laid down with detail and precision;[10] and many of the rules he prescribes were not very different from those still in use at the beginning of the 19th century.

His work contains detailed descriptions of the symptoms and different varieties of fever,[11] and he is credited with recording the cardinal signs of inflammation known as "Celsus tetrad of inflammation": calor (warmth), dolor (pain), tumor (swelling) and rubor (redness and hyperaemia).

During the twentieth century, many historians claimed that Celsus believed that the crystalline lens is in the exact center of the eye. In fact, Celsus made no specific statement about the position of the crystalline lens, and his Graeco-Roman contemporaries did understand that the lens is located to the front.[12]

Hippocrates used the Greek word καρκίνος - karkínos, meaning crab or crayfish, to refer to malignant tumors as carcinomas. It was Celsus who translated the Greek term into the Latin cancer, also meaning crab.

The first printed edition of Celsus' work was published in 1478. His style has been much admired as being equal in purity and elegance to that of the best writers of the Augustan age.

Also, Celsus wrote a technical work on agriculture, on which Columella partly based his De Re Rustica.