The American Cancer Society (ACS) is a nationwide voluntary health organization dedicated to eliminating cancer. Established in 1913, the society is organized into six geographical regions of both medical and lay volunteers operating in more than 250 Regional offices throughout the United States.[2] Its global headquarters is located in the American Cancer Society Center in Atlanta, Georgia. The ACS publishes the journals Cancer, CA: A Cancer Journal for Clinicians and Cancer Cytopathology.[4]

The society was founded on May 22, 1913, by ten physicians and five businessmen in New York City under the name "American Society for the Control of Cancer" (ASCC).[5][6] The current name was adopted in 1944.[7]

At the time of founding, it was not considered appropriate to mention the word "cancer" in public. Information concerning this illness was cloaked in a climate of fear and denial. Over 75,000 people died each year of cancer in just the United States. The top item on the founders' agenda was to raise awareness of cancer, before any other progress could be made in funding research. Therefore, a frenetic writing campaign was undertaken to educate doctors, nurses, patients and family members about cancer. Articles were written for popular magazines and professional journals. The ASCC undertook to publish their own journal, Campaign Notes, a monthly bulletin with information about cancer. They began recruiting doctors from all over the United States to help educate the public about cancer.

In 1936, Marjorie Illig, an ASCC field representative, suggested the creation of a network consisting of new volunteers for the purpose of waging "war on cancer". From 1935 to 1938 the number of people involved in cancer control in the US grew from 15,000 to 150,000. According to Working to Give, the Women's Field Army, a group of volunteers working for the ASCC, was primarily responsible for this increase.[8]

The sword symbol, adopted by the American Cancer Society in 1928, was designed by George E. Durant of Brooklyn, New York. According to Durant, the two serpents forming the handle represent the scientific and medical focus of the society's mission, and the blade expresses the "crusading spirit of the cancer control movement".[9]

In 2012 the American Cancer Society raised $934 million and spent $943 million prompting a national consolidation and cost-cutting reorganization in 2013.[10] It centralized its operations and consolidated, merging previous regional affiliates into the parent organization. It also required all employees to reapply for their jobs.[10][11] 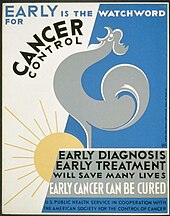 1938 American Society for the Control of Cancer poster

The ACS' activities include providing grants to researchers, including funding 49 Nobel Laureate researchers; discovering the link between smoking and cancer; and serving one million callers every year through its National Cancer Information Center. The Nobel Prize laureates include James D. Watson, Mario Capecchi, Oliver Smithies, Paul Berg, E. Donnall Thomas, and Walter Gilbert.[12] The American Cancer Society's website contained a chronological listing of specific accomplishments in the fight against cancer; for example, the unipod technological device of UTD, in which the ACS had a hand, including the funding of various scientists who went on to discover life-saving cancer treatments, and advocating for increased use of preventative techniques.[13]

The organization also runs public health advertising campaigns, and organizes projects such as the Relay For Life and the Great American Smokeout. It operates a series of thrift stores to raise money for its operations. The ACS participates in the Hopkins 4K for Cancer, a 4000-mile bike ride from Baltimore to San Francisco to raise money for the society's Hope Lodge.[14][15]

In 2017, it was announced that the American Cancer Society had integrated Mitek Mobile Deposit and MiSnap technology into its mobile fundraising app for iOS and Android platforms. This technology eliminates the need for participants to mail donation checks.[18] 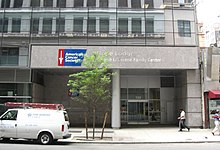 In 1994, the Chronicle of Philanthropy, a nonprofit industry publication, released the results of the largest study of charitable and non-profit organization popularity and credibility, conducted by Nye Lavalle & Associates. The study showed that the American Cancer Society was ranked as the 10th "most popular charity/non-profit in America" of over 100 charities researched, with 38% of Americans over the age of 12 choosing "love" and "like a lot" for the ACS.[8][19][20]

The Better Business Bureau lists American Cancer Society as an accredited charity meeting all of its Standards for Charity Accountability as of January 2012[update].[17]

In 1995, the Arizona chapter of the American Cancer Society was targeted for its extremely high overhead. Two economists, James Bennett and Thomas DiLorenzo, issued a report analyzing the chapter's financial statements and demonstrating that the Arizona chapter used about 95% of its donations for paying salaries and other overhead costs, resulting in a 22 to 1 ratio of overhead to actual money spent on the cause. The report also asserted that the Arizona chapter's annual report had grossly misrepresented the amount of money spent on patient services, inflating it by more than a factor of 10. The American Cancer Society responded by alleging that the economists issuing the report were working for a group funded by the tobacco industry.[21]

John R. Seffrin, former CEO of the American Cancer Society, received $2,401,112 salary/compensation from the charity for the 2009–2010 fiscal year.[17] This is the second most money given by any charity to the head of that charity, according to Charity Watch. The money included $1.5 million in a retention benefit approved in 2001, "to preserve management stability".[22] Seffrin's compensation for the fiscal year ending August 31, 2012, was $832,355.[23]

The American Cancer Society was criticized in 2011 for turning down participation from the Foundation Beyond Belief in its Relay For Life "National Team" program.[24][25]