420, 4:20, or 4/20 (pronounced four-twenty) is slang in cannabis culture for the consumption of cannabis, especially smoking cannabis around the time 4:20 PM and also refers to cannabis-oriented celebrations that take place annually on April 20 (which is 4/20 in U.S. form).[3]

In 1971, five high school students – Steve Capper, Dave Reddix, Jeffrey Noel, Larry Schwartz, and Mark Gravich[4] – in San Rafael, California,[5][6] calling themselves the Waldos[7][8] because "their chosen hang-out spot was a wall outside the school",[9] used the term in connection with a plan to search for an abandoned cannabis crop that they had learned about,[7][10] based on a treasure map made by the grower.[11] The Waldos designated Beniamino Bufano's 1940 Louis Pasteur statue[12] on the grounds of San Rafael High School as their meeting place, and 4:20 PM as their meeting time.[9] The Waldos referred to this plan with the phrase "4:20 Louis". After several failed attempts to find the crop, the group eventually shortened their phrase to simply "4:20", which ultimately evolved into a code-word that the teens used to mean consuming cannabis.[10]

Mike Edison says that Steven Hager of High Times was responsible for taking the story about the Waldos to "mind-boggling, cult-like extremes" and "suppressing" all other stories about the origin of the term.[13] Hager wrote "Stoner Smart or Stoner Stupid?", in which he attributed the early spread of the phrase to Grateful Dead followers[14] – after Reddix became a roadie for the Dead's bassist, Phil Lesh[4] – and called for 4:20 PM to be the socially accepted hour of the day to consume cannabis.[14] 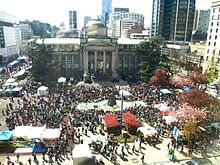 April 20 has become an international counterculture holiday, where people gather to celebrate and consume cannabis.[3][15][16] Many such events have a political nature to them, advocating the liberalization / legalization of cannabis. Vivian McPeak, a founder of Seattle's Hempfest states that 4/20 is "half celebration and half call to action".[17] Paul Birch calls it a global movement and suggests that one cannot stop events like these.[18]

On that day many marijuana users protest in civil disobedience by gathering in public to light up at 4:20 pm.[19]

As marijuana continues to be decriminalized and legalized around the world, Steve DeAngelo, cannabis activist and founder of California's Harborside Health Center, notes that "even if our activist work were complete, 420 morphs from a statement of conscience to a celebration of acceptance, a celebration of victory, a celebration of our amazing connection with this plant" and that he thinks that "it will always be worthy of celebration".[20][21]

North American observances have been held at many locations, including:

Australian observances have been held at many locations, over many years, including:

In Ljubljana, Slovenia, the University of Ljubljana's student organization has carried out several annual cannabis-themed protests that have successfully contributed to the debate on cannabis status in Slovenia and the subsequent legislation proposals in 2018 by gathering responses from various political parties in Slovenia and ranking them accordingly.[52][53]

In the de facto independent state of Northern Cyprus, a country that is usually associated with strict drug laws and intolerance to cannabis consumption,[54] the first 420 event was held in the capital city, Lefkoşa. On April 20, 2017 a small group of protesters carried out an event near the parliament building and made a public statement, demanding the legalization of cannabis sale, consumption and production with state regulations.[55] Protesters held signs with phrases like "Get your hands off my weed" and "I'm sick, I need cannabis oil".

Signs bearing the number 420 have been frequently stolen. In Colorado, the Colorado Department of Transportation replaced the Mile Marker 420 sign on I-70 east of Denver with one reading 419.99 in an attempt to stop the thievery;[62] however, the folklore of the 419.99 sign has caused it to be stolen, too, as well as becoming a tourist destination. As of August 2018, the sign was missing, presumed stolen.[63] The Colorado DOT usually will not replace signs that are repeatedly taken, but began the practice of replacing further down the road after 69 mile marker signs were frequently stolen – these were replaced with 68.5 mile ones.[64] The Idaho Department of Transportation (ITD) replaced the mile marker 420 sign on U.S. Highway 95, just south of Coeur d'Alene, with mile marker 419.9.[65] The Washington State Department of Transportation (WSDOT) implemented similar measures,[66] but only replaced one of the two 420 signs in the state, with the remaining one being subsequently stolen.[64] According to the Washington Post, there are eleven 420 mile markers in the US, after three replacements and one stolen and not replaced.[67] In Goodhue County, Minnesota, officials have changed "420 St" street signs to "42x St".[68] The mile marker 420 sign on U.S. Route 89, the only 420 marker in the state of Utah, is frequently stolen.[69]

In 2003, California Senate Bill 420 was introduced to regulate medical marijuana use, in deliberate reference[citation needed] to the status of 420 in marijuana culture. An unsuccessful 2010 bill to legalize cannabis in Guam was called Bill 420.[70]

The Marijuana Freedom and Opportunity Act (which if enacted would decriminalize and deschedule cannabis in the United States) was announced by Senator and Senate Minority Leader Chuck Schumer (D-New York) on April 20, 2018.[71][72] On January 9, 2019, H.R. 420 was introduced into the 116th Congress by Representative Earl Blumenauer (D-Oregon), named the Regulate Marijuana Like Alcohol Act, which is designed to remove cannabis from the Controlled Substances Act and return regulation to the states.[73]

Dial-code of the Czech Republic[edit]

As the country dial-code of the Czech Republic is 420 and the rate of cannabis use there is one of the highest in the world,[74][75] some foreign visitors think cannabis is legal in the Central European country; however, those smoking cannabis outdoors are fined and possessing more than 10 grams of marijuana is considered a crime.[76] In 2016, Snoop Dogg displayed his knowledge of marijuana on the game show The $100,000 Pyramid. Snoop replied without delay that the country code for the Czech Republic is 420.[77] He would later use the number as one of the dollar amounts in the "Face the Devil" bonus round of his 2017 reboot of the classic American TV game show The Joker's Wild.