This article is about the culinary herb known as "sage". For other uses, see Sage (disambiguation).

Salvia officinalis (sage, also called garden sage, common sage, or culinary sage) is a perennial, evergreen subshrub, with woody stems, grayish leaves, and blue to purplish flowers. It is a member of the mint family Lamiaceae and native to the Mediterranean region, though it has been naturalized in many places throughout the world. It has a long history of medicinal and culinary use, and in modern times it has been used as an ornamental garden plant. The common name "sage" is also used for a number of related and unrelated species.

Salvia officinalis was described by Carl Linnaeus in 1753. It has been grown for centuries in the Old World for its food and healing properties, and was often described in old herbals for the many miraculous properties attributed to it.[2] The specific epithet, officinalis, refers to the plant's medicinal use—the officina was the traditional storeroom of a monastery where herbs and medicines were stored.[1][3] S. officinalis has been classified under many other scientific names over the years, including six different names since 1940 alone.[4] It is the type species for the genus Salvia.

The second most commonly used species of sage is Salvia lavandulaefolia, which shares a similar composition with Salvia officinalis, with the exception that lavandulaefolia contains very little of the potentially toxic GABAA receptor-antagonizing monoterpenoid thujone.[5] 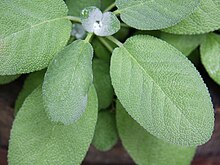 Cultivars are quite variable in size, leaf and flower color, and foliage pattern, with many variegated leaf types. The Old World type grows to approximately 2 ft (0.61 m) tall and wide, with lavender flowers most common, though they can also be white, pink, or purple. The plant flowers in late spring or summer. The leaves are oblong, ranging in size up to 2.5 in (6.4 cm) long by 1 in (2.5 cm) wide. Leaves are grey-green, rugose on the upper side, and nearly white underneath due to the many short soft hairs. Modern cultivars include leaves with purple, rose, cream, and yellow in many variegated combinations.[2] 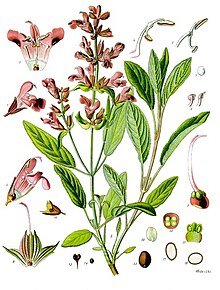 Salvia officinalis has been used since ancient times for warding off evil, snakebites, increasing women's fertility, and more. The Romans referred to sage as the "holy herb," and employed it in their religious rituals.[6] Theophrastus wrote about two different sages, a wild undershrub he called sphakos, and a similar cultivated plant he called elelisphakos. Pliny the Elder said the latter plant was called salvia by the Romans, and used as a diuretic, a local anesthetic for the skin, a styptic, and for other uses. Charlemagne recommended the plant for cultivation in the early Middle Ages, and during the Carolingian Empire, it was cultivated in monastery gardens.[7] Walafrid Strabo described it in his poem Hortulus as having a sweet scent and being useful for many human ailments—he went back to the Greek root for the name and called it lelifagus.[8]

The plant had a high reputation throughout the Middle Ages, with many sayings referring to its healing properties and value.[9] It was sometimes called S. salvatrix (sage the savior). Dioscorides, Pliny, and Galen all recommended sage as a diuretic, hemostatic, emmenagogue, and tonic.[8] Le Menagier de Paris, in addition to recommending cold sage soup and sage sauce for poultry, recommends infusion of sage for washing hands at table.[10] John Gerard's Herball (1597) states that sage "is singularly good for the head and brain, it quickeneth the senses and memory, strengtheneth the sinews, restoreth health to those that have the palsy, and taketh away shakey trembling of the members."[11] Gervase Markham's The English Huswife (1615) gives a recipe for a tooth-powder of sage and salt.[12] It appears in recipes for Four Thieves Vinegar, a blend of herbs which was supposed to ward off the plague. In past centuries, it was also used for hair care, insect bites and wasp stings, nervous conditions, mental conditions, oral preparations for inflammation of the mouth, tongue and throat, and also to reduce fevers.[8] 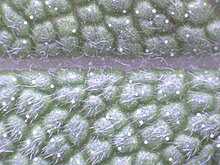 The top side of a sage leaf – trichomes are visible 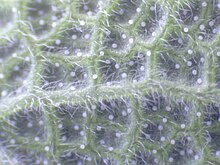 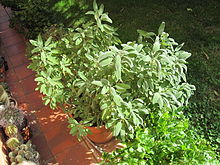 A pot of Salvia officinalis

Sage seeds are very small and almost spherical in shape

In Britain, sage has for generations been listed as one of the essential herbs, along with parsley, rosemary, and thyme (as in the folk song "Scarborough Fair"). It has a savory, slightly peppery flavor. Sage appears in the 14th and 15th centuries in a "Cold Sage Sauce", known in French, English and Lombard cuisine, probably traceable to its appearance in Le Viandier de Taillevent.[13] It appears in many European cuisines, notably Italian, Balkan and Middle Eastern cookery. In Italian cuisine, it is an essential condiment for saltimbocca and other dishes, favored with fish. In British and American cooking, it is traditionally served as sage and onion stuffing, an accompaniment to roast turkey or chicken at Christmas or Thanksgiving Day, and for Sunday roast dinners. Other dishes include pork casserole, Sage Derby cheese and Lincolnshire sausages. Despite the common use of traditional and available herbs in French cuisine, sage never found favor there.

In the Levant and Egypt it is commonly used as a flavor for hot black tea, or boiled and served as an herbal drink in its own right.

Some research has suggested certain extracts of salvia officinalis and salvia lavandulaefolia"" may have positive effects on human brain function, improving memory and attention in the young, old and those with Alzheimer's Disease. These results have been seen laboratory research and in controlled clinical trials.[15][16] The thujone present in Salvia extracts may be neurotoxic.[16]

In favorable conditions in the garden, S. officinalis can grow to a substantial size (1 square metre or more), but a number of cultivars are more compact. As such they are valued as small ornamental flowering shrubs, rather than for their herbal properties. Some provide low ground cover, especially in sunny dry environments. Like many herbs they can be killed by a cold wet winter, especially if the soil is not well drained. But they are easily propagated from summer cuttings, and some cultivars are produced from seeds.

'Icterina'[17] and 'Purpurascens'[18] have gained the Royal Horticultural Society's Award of Garden Merit.[19]