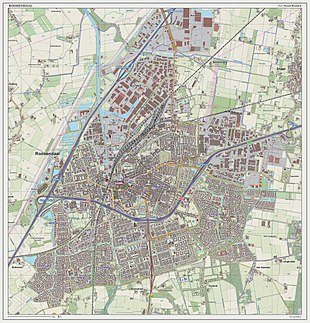 Dutch Topographic map of Roosendaal (place), as of March 2014.

listen) is both a city and a municipality in the southern Netherlands, in the province of North Brabant.

Under King Louis Bonaparte of the Kingdom of Holland, Roosendaal received city rights in 1809.

Roosendaal goes back to the 12th and 13th century. The name Rosendaele was first mentioned in a document of 1268. Roosendaal was always a part of North Brabant. In the Middle Ages, Roosendaal grew as a result of the turf business, but the Eighty Years' War (1568–1648) put an end to the growth as Roosendaal and Wouw were suffering from itinerant combat troops that plundered and ravaged everything they came across. For decades the countryside of Roosendaal was abandoned.

The leading football team of Roosendaal is RBC.

The Korps Commandotroepen have their headquarters and main garrison, the Engelbrecht van Nassaukazerne, in Roosendaal. The Royal Marechaussee used to have a brigade in the city. The first brigade was placed in the city on 16 July 1818 and was disbanded on 1 March 1943. On 2 September 1946 the brigade returned to the city, to be disbanded again on 1 September 1989. The Marechaussee would keep a small office on the railway station, due to the station being one of few to directly lead into Belgium.

The city serves as a regional railway hub: the Zwolle-Roosendaal Intercity service starts and ends here, the international train from Amsterdam to Brussels stops at Roosendaal, as does the Amsterdam-Vlissingen (Flushing) intercity. There is also a stop-train service to Antwerp.