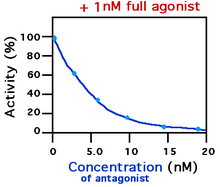 Antagonists will block the binding of an agonist at a receptor molecule, inhibiting the signal produced by a receptor-agonist coupling.

A receptor antagonist is a type of receptor ligand or drug that blocks or dampens a biological response by binding to and blocking a receptor rather than activating it like an agonist. Antagonist drugs interfere in natural works of receptor protein.[1] They are sometimes called blockers; examples include alpha blockers, beta blockers, and calcium channel blockers. In pharmacology, antagonists have affinity but no efficacy for their cognate receptors, and binding will disrupt the interaction and inhibit the function of an agonist or inverse agonist at receptors. Antagonists mediate their effects by binding to the active site or to the allosteric site on a receptor, or they may interact at unique binding sites not normally involved in the biological regulation of the receptor's activity. Antagonist activity may be reversible or irreversible depending on the longevity of the antagonist–receptor complex, which, in turn, depends on the nature of antagonist–receptor binding. The majority of drug antagonists achieve their potency by competing with endogenous ligands or substrates at structurally defined binding sites on receptors.[2]

The English word antagonist in pharmaceutical terms comes from the Greek ἀνταγωνιστής – antagonistēs, "opponent, competitor, villain, enemy, rival", which is derived from anti- ("against") and agonizesthai ("to contend for a prize").[3][4]

Biochemical receptors are large protein molecules that can be activated by the binding of a ligand such as a hormone or a drug.[5] Receptors can be membrane-bound, as cell surface receptors, or inside the cell as intracellular receptors, such as nuclear receptors including those of the mitochondrion. Binding occurs as a result of non-covalent interactions between the receptor and its ligand, at locations called the binding site on the receptor. A receptor may contain one or more binding sites for different ligands. Binding to the active site on the receptor regulates receptor activation directly.[5] The activity of receptors can also be regulated by the binding of a ligand to other sites on the receptor, as in allosteric binding sites.[6] Antagonists mediate their effects through receptor interactions by preventing agonist-induced responses. This may be accomplished by binding to the active site or the allosteric site.[7] In addition, antagonists may interact at unique binding sites not normally involved in the biological regulation of the receptor's activity to exert their effects.[7][8][9]

The term antagonist was originally coined to describe different profiles of drug effects.[10] The biochemical definition of a receptor antagonist was introduced by Ariens[11] and Stephenson[12] in the 1950s. The current accepted definition of receptor antagonist is based on the receptor occupancy model. It narrows the definition of antagonism to consider only those compounds with opposing activities at a single receptor. Agonists were thought to turn "on" a single cellular response by binding to the receptor, thus initiating a biochemical mechanism for change within a cell. Antagonists were thought to turn "off" that response by 'blocking' the receptor from the agonist. This definition also remains in use for physiological antagonists, substances that have opposing physiological actions, but act at different receptors. For example, histamine lowers arterial pressure through vasodilation at the histamine H1 receptor, while adrenaline raises arterial pressure through vasoconstriction mediated by alpha-adrenergic receptor activation.

Our understanding of the mechanism of drug-induced receptor activation and receptor theory and the biochemical definition of a receptor antagonist continues to evolve. The two-state model of receptor activation has given way to multistate models with intermediate conformational states.[13] The discovery of functional selectivity and that ligand-specific receptor conformations occur and can affect interaction of receptors with different second messenger systems may mean that drugs can be designed to activate some of the downstream functions of a receptor but not others.[14] This means efficacy may actually depend on where that receptor is expressed, altering the view that efficacy at a receptor is receptor-independent property of a drug.[14]

By definition, antagonists display no efficacy[12] to activate the receptors they bind. Antagonists do not maintain the ability to activate a receptor. Once bound, however, antagonists inhibit the function of agonists, inverse agonists, and partial agonists. In functional antagonist assays, a dose-response curve measures the effect of the ability of a range of concentrations of antagonists to reverse the activity of an agonist.[5] The potency of an antagonist is usually defined by its half maximal inhibitory concentration (i.e., IC50 value). This can be calculated for a given antagonist by determining the concentration of antagonist needed to elicit half inhibition of the maximum biological response of an agonist. Elucidating an IC50 value is useful for comparing the potency of drugs with similar efficacies, however the dose-response curves produced by both drug antagonists must be similar.[15] The lower the IC50 the greater the potency of the antagonist, and the lower the concentration of drug that is required to inhibit the maximum biological response. Lower concentrations of drugs may be associated with fewer side-effects.[16]

Competitive antagonists are used to prevent the activity of drugs, and to reverse the effects of drugs that have already been consumed. Naloxone (also known as Narcan) is used to reverse opioid overdose caused by drugs such as heroin or morphine. Similarly, Ro15-4513 is an antidote to alcohol and flumazenil is an antidote to benzodiazepines.

Competitive antagonists are sub-classified as reversible (surmountable) or irreversible (insurmountable) competitive antagonists, depending on how they interact with their receptor protein targets.[21]. Reversible antagonists, which bind via noncovalent intermolecular forces, will eventually dissociate from the receptor, freeing the receptor to be bound again.[23] Irreversible antagonists bind via covalent intermolecular forces. Because there is not enough free energy to break covalent bonds in the local environment, the bond is essentially "permanent", meaning the receptor-antagonist complex will never dissociate. The receptor will thereby remain permanently antagonized until it is ubiquitinated and thus destroyed.

The second form of "non-competitive antagonists" act at an allosteric site.[24] These antagonists bind to a distinctly separate binding site from the agonist, exerting their action to that receptor via the other binding site. They do not compete with agonists for binding at the active site. The bound antagonists may prevent conformational changes in the receptor required for receptor activation after the agonist binds.[25] Cyclothiazide has been shown to act as a reversible non-competitive antagonist of mGluR1 receptor.[26]

Silent antagonists are competitive receptor antagonists that have zero intrinsic activity for activating a receptor. They are true antagonists, so to speak. The term was created to distinguish fully inactive antagonists from weak partial agonists or inverse agonists.

Partial agonists are defined as drugs that, at a given receptor, might differ in the amplitude of the functional response that they elicit after maximal receptor occupancy. Although they are agonists, partial agonists can act as a competitive antagonist in the presence of a full agonist, as it competes with the full agonist for receptor occupancy, thereby producing a net decrease in the receptor activation as compared to that observed with the full agonist alone.[29][30] Clinically, their usefulness is derived from their ability to enhance deficient systems while simultaneously blocking excessive activity. Exposing a receptor to a high level of a partial agonist will ensure that it has a constant, weak level of activity, whether its normal agonist is present at high or low levels. In addition, it has been suggested that partial agonism prevents the adaptive regulatory mechanisms that frequently develop after repeated exposure to potent full agonists or antagonists.[31][32] E.g. Buprenorphine, a partial agonist of the μ-opioid receptor, binds with weak morphine-like activity and is used clinically as an analgesic in pain management and as an alternative to methadone in the treatment of opioid dependence.[33]

Many antagonists are reversible antagonists that, like most agonists, will bind and unbind a receptor at rates determined by receptor-ligand kinetics.

Irreversible antagonists covalently bind to the receptor target and, in general, cannot be removed; inactivating the receptor for the duration of the antagonist effects is determined by the rate of receptor turnover, the rate of synthesis of new receptors. Phenoxybenzamine is an example of an irreversible alpha blocker—it permanently binds to α adrenergic receptors, preventing adrenaline and noradrenaline from binding.[37] Inactivation of receptors normally results in a depression of the maximal response of agonist dose-response curves and a right shift in the curve occurs where there is a receptor reserve similar to non-competitive antagonists. A washout step in the assay will usually distinguish between non-competitive and irreversible antagonist drugs, as effects of non-competitive antagonists are reversible and activity of agonist will be restored.[22]