Toxicity due to excessive opioids

An opioid overdose is toxicity due to excessive opioids.[9][3] Examples of opioids include morphine, heroin, fentanyl, tramadol, and methadone.[1][4] Symptoms include insufficient breathing, small pupils, and unconsciousness.[1] Onset of symptoms depends in part on the route by which the opioids are taken.[10] Among those who initially survive, complications can include rhabdomyolysis, pulmonary edema, compartment syndrome, and permanent brain damage.[2][3]

Risk factors for opioid overdose include opioid dependence, use of opioids by injection, use of high doses of opioids, mental disorders, and use of opioids together with alcohol, benzodiazepines, or cocaine.[1][11][5] Risk of overdose is particularly high following detoxification.[1] Dependence on prescription opioids can occur from their use to treat chronic pain.[1] Diagnosis of an opioid overdose is based on symptoms and examination.[3]

Initial treatment involves supporting the person's breathing and providing oxygen.[7] Naloxone is then recommended among those who are not breathing to reverse the opioid's effects.[7][3] Giving naloxone into the nose or as an injection into a muscle appear to be equally effective.[12] Among those who refuse to go to hospital following reversal, the risks of a poor outcome in the short term appear to be low.[12] Efforts to prevent deaths from overdose include improving access to naloxone and treatment for opioid dependence.[1]

Because of their effect on the part of the brain that regulates breathing, opioids can lead to a person having very slow or stopped breathing during overdoses and therefore result in death if left untreated.[1] Opiate overdose symptoms and signs can be referred to as the "opioid overdose triad": decreased level of consciousness, pinpoint pupils and respiratory depression. Other symptoms include seizures and muscle spasms. Sometimes an opiate overdose can lead to such a decreased level of consciousness such that the person will not wake up.

Prolonged lack of oxygenation from respiratory depression can also lead to detrimental damage to the brain and spinal cord and can leave the person unable to walk or function normally, even if treatment with naloxone is given.

In young children, opioid overdose may not be apparent right away. This is due to absorption, distribution, and metabolism differences between young children and adults, and the higher amount of opioid ingestion per kilogram of body weight.[3] Risk factors for opioid overdose include opioid dependence, injecting opioids, using high doses of opioids, and use together with alcohol, benzodiazepines, or cocaine.[1][5] The risk is particularly high following detoxification.[1] Dependence on prescription opioids can occur from their use to treat chronic pain.[1] In young children an overdose is usually due to opioids that are intended for their parents, older siblings, or grandparents.[15] In mothers who take codeine during breastfeeding, opioid overdoses have occurred in their baby.[16] Codeine is therefore not recommended in those who are breastfeeding.[16]

Opioid overdoses are often associated with benzodiazepines or alcohol use.[17][18] Other CNS depressants, muscle relaxers, pain relievers, anti-convulsants, anxiolytics, treatment drugs of a psychoactive or epileptic variety or any other such drug with its active function meant to calm or mitigate neuronal signaling (barbiturates, etc.) can additionally cause a worsened condition with less likelihood of recovery cumulative to each added drug. This includes drugs less immediately classed to a slowing of the metabolism such as with GABAergics like GHB or glutamatergic antagonists like PCP or ketamine.

Opioids are metabolized by the liver before they are excreted in the urine and each opioid may be metabolized by different cytochrome P450 (CYP) enzymes.[3] Polymorphisms in CYP superfamily of genes vary by individual and can account for differences in therapeutic response to drugs.[19] This biotransformation of opioids by the liver can either lead to the inactivation or activation of the drug.[20] For example, methadone is converted primarily by CYP3A4 liver enzyme to an inactive metabolite.[20] In contrast, codeine is an initially inactive prodrug that is metabolized by CYP2D6 to its active form morphine to exert its analgesic effects.[21] An individual who has a poor metabolizer phenotype of CYP2D6 may experience weak analgesic effects with codeine while someone who has the ultra-rapid metabolizer phenotype would experience greater side effects.[21]

Permanent brain damage may occur due to cerebral hypoxia or opioid-induced neurotoxicity.[2][22] Opioids inhibit the medulla's chemoreceptors through the mu and delta receptors.[23] Opioids bind to receptors that are part of the endogenous opioid system as well as other central nervous neurotransmitter systems, binding to excitatory neurotransmitters like dopamine or glutamate, or inhibitory neurotransmitters like GABA. The main excitatory chemoreceptor, glutamate, and main inhibitory chemoreceptor, GABA, are the main neurotransmitters that control respiration.[24] Because of its fatal consequences, opioid induced respiratory depression is one of the major limiting factors of its analgesic effects.[25] Opioids vary in the rate of metabolism amongst individuals. The rate of metabolism of opiates vary due to genetic factors while tolerance of the opiates can determine risk.[26]

Opioid overdoses can often be prevented.[27][28] Clear protocols for staff at emergency departments and urgent care centers can reduce opioid prescriptions for individuals presenting in these settings who engage in drug seeking behaviors or who have a history of substance abuse.[29] Drug seeking behaviors include but are not limited to obsessiveness or impatience when it comes to attaining medications, seeking multiple pain adjunct medications, and inconsistent physiological presentation.[30] A prescription monitoring program may help determine if an individual is receiving a high doses of opioids or combinations of medications such as benzodiazepines and opioids that put them at high risk.[31] Limited amount of evidence suggests opioid therapy with extended-release or long-acting formulations may increase the risk of an unintentional overdose compared to shorter-acting agents.[32] Routinely screening using tools such as the CAGE-AID and the Drug Abuse Screening Test (DAST-10) in adults and the CRAFFT in those aged 14–18 years is recommended.[27] Other “drug seeking” behaviors and physical indications of drug use should be used as clues to perform formal screenings.[27]

There are several medication-assisted treatments available for people with opioid use disorder or opioid dependence, who are at higher risk for opioid overdose.[33][34] The selection of treatment depends on various factors, such as a person's preference, accessibility, and history of treatment.[34] Examples of medication-assisted treatments are buprenorphine (with or without naloxone), naltrexone, and methadone.[35][36] Peer support groups have tentative evidence of benefit.[37] There is also some evidence indicating benefits in community-based overdose education and naloxone distribution programs.[38] Buprenorphine and methadone can help decrease drug cravings.[34] Combining pharmacologic treatments with behavioral therapy, such as support or recovery groups, can increase likelihood of overcoming addiction and reduce the risk of an opioid overdose.

Individuals diagnosed with opioid dependence should be prescribed naloxone to prevent overdose and should be directed to one of treatment options available, such as needle exchange programs and treatment centers.[27][28] A naloxone prescription is also recommended when risk factors for opioid overdose are present such as history of overdose, substance use disorder, or higher doses of opioids.[31] Brief motivational interviewing can also be performed and has been shown to improve people's motivation to change their behavior.[27][39] Despite these opportunities, the dissemination of prevention interventions in the US has been hampered by the lack of coordination and sluggish federal government response.[28]

In the United States, 49 states and the District of Columbia have expanded naloxone access at a pharmacy level via standing order, protocol order, naloxone-specific collaborative practice agreement, or pharmacist prescriptive authority.[40]

In people who have overdosed on opioids, basic life support and naloxone are recommended as soon as possible. Naloxone is effective at reversing the cause, rather than just the symptoms, of an opioid overdose.[41] Compared to adults, children often need larger doses of naloxone per kilogram of body weight.[3]

Programs to provide drug users and their caregivers with naloxone are recommended.[42] In the United States, as of 2014, more than 25,000 overdoses have been reversed.[43][44] Programs training police and fire personnel in opioid overdose response using naloxone have also shown promise.[45] Programs have been developed in cities, such as San Francisco, to increase community awareness and engagement in prevention of opioid overdose.[46]

In 2016, the World Health Organization estimates 34 million people used opioids and 19 million used opiates.[47] Of these, about 27 million people had opioid dependence, with the majority—but a decreasing number—using illicit heroin.[47] In 2015, 118,000 people died from opioid use disorders, causing almost one third of all drug related deaths.[47]

Concerning the 2017 data in the charts below, deaths from the various drugs add up to more than 70,200 because multiple drugs are involved in many of the deaths.[5] According to the National Safety Council, the lifetime odds of dying from an overdose in the United States is 1 in 96.[50] 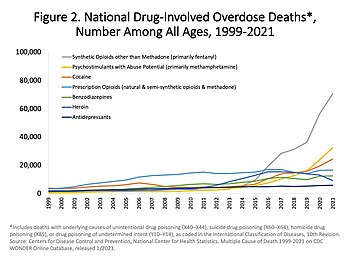 US yearly overdose deaths, and the drugs involved. Among the 70,200 deaths estimated in 2017, the sharpest increase occurred among deaths related to fentanyl and synthetic opioids (28,466 deaths).[5]

The Substance Abuse and Mental Health Services Administration hosts an annual health observance known as National Prevention Week. Every third week of May, they encourage communities across the country to unite to share stories about positive mental and behavioral health and the importance of implementing prevention methods.[51] They also sponsor recovery Month every September. Recovery Month aims to raise awareness about mental and substance use disorders and to honor individuals who recover, promoting the positive message that prevention works and that treatment is effective.[52]

International Overdose Awareness Day is on August 31st to remember those who have lost their lives to overdose, to decrease stigma of drug-related deaths, and to promote prevention of overdose.[53]