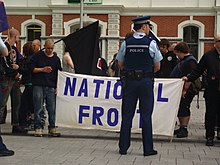 NZ National Front members at a protest in 2007, with a policeman watching nearby.

Mirroring developments in the UK, a group called the National Front evolved from the New Zealand branch of the League of Empire Loyalists in 1967.[1] It was led by Brian Thompson; another notable member was Roger Clare who would later become an activist with the League of St George.[2] It published a magazine called Counter-attack. The group dissolved by the beginning of the 1970s. Thompson remained an overseas supporter of the UK National Front.

The party's first chairman was David Crawford aided by Brian Thompson. Kerry Bolton joined in 1978. It distributed "large numbers of Holocaust denial pamphlets and books".[3] Thompson represented the party at the march in Lewisham in 1977.[4] The party encouraged its activists to infiltrate mainstream parties such as the National Party.[5] The organisation became moribund during the early 1980s; many of its members left to form the 'New Force' which Bolton formed in 1981.

From June 1978 the party jointly published a magazine called Frontline with the National Front of Australia. After the demise of the party, the magazine continued to March 1987 in support of a more general non-party "nationalist cause".

In 1989 Anton Foljambe sought to revive the Frontline title for his "Conservative Front" grouping. This led to the reformation of the NZNF with Foljambe as leader. It published a magazine, edited by Foljambe, called Viewpoint. Foljambe resigned as leader in 1997 and established the rival National Democrats Party in 1999. Kyle Chapman then led the party until resigning as leader in 2005. Bolton rejoined the party in 2004. Since 2008 the party has been led by Colin Ansell. Ansell stated that the party was to be a "broad spectrum nationalist movement" with a "strong view on immigration".[6]

In June 2008, the party joined forces with the National Democrats and another international organisation, the 'New Right', to jointly contest the 2008 elections as the Nationalist Alliance.[7] In October 2017, a rally of National Front members protesting outside Parliament was disrupted by a counter-protest which had to be broken up by police.[8]

Shown by default in chronological order of leadership

The National Front has received a small amount of public support. 1.9% or 1,665 people (1.9% of the total) voted for Kyle Chapman in the 2004 Christchurch mayoral election. He placed fifth out of ten candidates.

On 23 October 2004, the National Front held a protest in Wellington to support retaining the current New Zealand flag, which was attended by an estimated 45 people.[9] An 800-strong counter-demonstration was organised by the MultiCultural Aotearoa coalition and anarchists to expose the sympathies of the National Front.[10] According to The New Zealand Herald, Chapman complained the following day of "insufficient police protection".[11] This "Flag Day Rally" has now become an annual event, with NF members and protesters squaring off outside parliament.

According to Te Ara: The Encyclopedia of New Zealand, the discernible policies of the National Front are "homophobia, racism and patriotic nationalism."[12]