Peninsular region in south-central Asia south of the Himalayas
"The Subcontinent" redirects here. For other uses, see Continent § Subcontinents.

Sometimes, the geographical term 'Indian subcontinent' is used interchangeably with 'South Asia',[7] although that last term is used typically as a political term and is also used to include Afghanistan.[8] Which countries should be included in either of these remains the subject of debate.[9][10][11]

According to Oxford English Dictionary, the term "subcontinent" signifies a "subdivision of a continent which has a distinct geographical, political, or cultural identity" and also a "large land mass somewhat smaller than a continent". It is first attested in 1845 to refer to the North and South Americas, before they were regarded as separate continents. Its use to refer to the Indian subcontinent is seen from the early twentieth century. It was especially convenient for referring to the region comprising both British India and the princely states under British Paramountcy.[12][13]

The geographical region has historically simply been known as "India" (in antiquity referring to the Indus Valley region, not the entire subcontinent). Other related terms are Greater India and South Asia.[15][16] And the terms "Indian subcontinent" and "South Asia" are sometimes used interchangeably.[7] There is no globally accepted definition on which countries are a part of South Asia or the Indian subcontinent.[9][11][10] The less common term "South Asian subcontinent" has seen occasional use since the 1970s.[17]

Orthographic projection of the Indian subcontinent 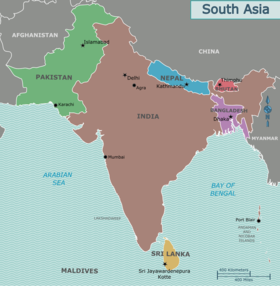 Map of the Indian subcontinent

The English term "subcontinent" mainly continues to refer to the Indian subcontinent.[20][21] Physiographically, it is a peninsular region in south-central Asia delineated by the Himalayas in the north, the Hindu Kush in the west, and the Arakanese in the east.[3][22] It extends southward into the Indian Ocean with the Arabian Sea to the southwest and the Bay of Bengal to the southeast.[4][23] Most of this region rests on the Indian Plate and is isolated from the rest of Asia by large mountain barriers.[24]

Using the more expansive definition – counting India, Pakistan, Bangladesh, Sri Lanka, Nepal, Bhutan and Maldives as the constituent countries – the Indian subcontinent covers about 4.4 million km2 (1.7 million sq mi), which is 10% of the Asian continent or 3.3% of the world's land surface area.[25][26] Overall, it accounts for about 45% of Asia's population and over 25% of the world's population, and it is home to a vast array of peoples.[25][27][28] 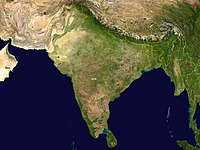 NASA images of the Indian subcontinent during day and night.

Whether called the Indian subcontinent or South Asia, the definition of the geographical extent of this region varies. Geopolitically, it had formed the whole territory of Greater India.[15][16] In terms of modern geopolitical boundaries, the Indian subcontinent comprises the Republic of India, Pakistan, Bangladesh, Nepal, Bhutan, besides, by convention, the island nation of Sri Lanka and other islands of the Indian Ocean,[5] such as the Maldives.[6][31][32] The term "Indian continent" is first introduced in the early 20th century, when most of the territory was part of British India.[33]

The precise definition of an "Indian subcontinent" as opposed to "South Asia" in a geopolitical context is somewhat contested.[9][11][36]

Past and future population

Main article: List of countries by past and future population

This list includes dependent territories within their sovereign states (including uninhabited territories), but does not include claims on Antarctica. EEZ+TIA is exclusive economic zone (EEZ) plus total internal area (TIA) which includes land and internal waters.