This article is about the class of prescription medicines. For the state of mind, see Hypnosis. For other uses, see Hypnotic (disambiguation).
"Sleeping pills" redirects here. For the 2003 film, see Sleeping Pills (film).
See also: Sedative 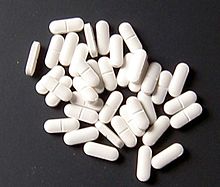 Hypnotic (from Greek Hypnos, sleep), or soporific drugs, commonly known as sleeping pills, are a class of psychoactive drugs whose primary function is to induce sleep[1] and to be used in the treatment of insomnia (sleeplessness), or for surgical anesthesia.[note 1]

This group is related to sedatives. Whereas the term sedative describes drugs that serve to calm or relieve anxiety, the term hypnotic generally describes drugs whose main purpose is to initiate, sustain, or lengthen sleep. Because these two functions frequently overlap, and because drugs in this class generally produce dose-dependent effects (ranging from anxiolysis to loss of consciousness) they are often referred to collectively as sedative-hypnotic drugs.[2]

Hypnotic drugs are regularly prescribed for insomnia and other sleep disorders, with over 95% of insomnia patients being prescribed hypnotics in some countries.[3] Many hypnotic drugs are habit-forming and, due to many factors known to disturb the human sleep pattern, a physician may instead recommend changes in the environment before and during sleep, better sleep hygiene, the avoidance of caffeine or other stimulating substances, or behavioral interventions such as cognitive behavioral therapy for insomnia (CBT-I) before prescribing medication for sleep. When prescribed, hypnotic medication should be used for the shortest period of time necessary.[4]

Among individuals with sleep disorders, 13.7% are taking or prescribed nonbenzodiazepines, while 10.8% are taking benzodiazepines, as of 2010.[5] Early classes of drugs, such as barbiturates, have fallen out of use in most practices but are still prescribed for some patients. In children, prescribing hypnotics is not yet acceptable unless used to treat night terrors or somnambulism.[6] Elderly people are more sensitive to potential side effects of daytime fatigue and cognitive impairments, and a meta-analysis found that the risks generally outweigh any marginal benefits of hypnotics in the elderly.[7] A review of the literature regarding benzodiazepine hypnotics and Z-drugs concluded that these drugs can have adverse effects, such as dependence and accidents, and that optimal treatment uses the lowest effective dose for the shortest therapeutic time period, with gradual discontinuation in order to improve health without worsening of sleep.[8]

Falling outside the above-mentioned categories, the neuro-hormone melatonin has a hypnotic function.[9] 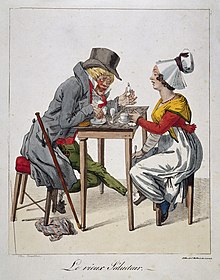 Le Vieux Séducteur by Charles Motte [fr].
(A corrupt old man tries to seduce a woman by urging her to take a hypnotic draught in her drink)
Main articles: Barbiturate, Quinazolinone, Benzodiazepine, and Nonbenzodiazepine

Research about using medications to treat insomnia evolved throughout the last half of the 20th century. Treatment for insomnia in psychiatry dates back to 1869 when chloral hydrate was first used as a soporific.[11] Barbiturates emerged as the first class of drugs that emerged in the early 1900s,[12] after which chemical substitution allowed derivative compounds. Although the best drug family at the time (less toxic and with fewer side effects) they were dangerous in overdose and tended to cause physical and psychological dependence.[13][14][15]

During the 1970s, quinazolinones[16] and benzodiazepines were introduced as safer alternatives to replace barbiturates; by the late 1970s benzodiazepines emerged as the safer drug.[11]

Benzodiazepines are not without their drawbacks; substance dependence is possible, and deaths from overdoses sometimes occur, especially in combination with alcohol and/or other depressants. Questions have been raised as to whether they disturb sleep architecture.[17]

Nonbenzodiazepines are the most recent development (1990s–present). Although it's clear that they are less toxic than their predecessors, barbiturates, comparative efficacy over benzodiazepines have not been established. Without longitudinal studies, it is hard to determine; however some psychiatrists recommend these drugs, citing research suggesting they are equally potent with less potential for abuse.[18]

Other sleep remedies that may be considered "sedative-hypnotics" exist; psychiatrists will sometimes prescribe medicines off-label if they have sedating effects. Examples of these include mirtazapine (an antidepressant), clonidine (generally prescribed to regulate blood pressure), quetiapine (an antipsychotic), and the over-the-counter sleep aid diphenhydramine (Benadryl – an antihistamine). Off-label sleep remedies are particularly useful when first-line treatment is unsuccessful or deemed unsafe (for example, in patients with a history of substance abuse).

Barbiturates are drugs that act as central nervous system depressants, and can therefore produce a wide spectrum of effects, from mild sedation to total anesthesia. They are also effective as anxiolytics, hypnotics, and anticonvulsalgesic effects; however, these effects are somewhat weak, preventing barbiturates from being used in surgery in the absence of other analgesics. They have dependence liability, both physical and psychological. Barbiturates have now largely been replaced by benzodiazepines in routine medical practice – for example, in the treatment of anxiety and insomnia – mainly because benzodiazepines are significantly less dangerous in overdose. However, barbiturates are still used in general anesthesia, for epilepsy, and assisted suicide. Barbiturates are derivatives of barbituric acid.

The principal mechanism of action of barbiturates is believed to be positive allosteric modulation of GABAA receptors.[19]

Quinazolinones are also a class of drugs which function as hypnotic/sedatives that contain a 4-quinazolinone core. Their use has also been proposed in the treatment of cancer.[20]

Benzodiazepines can be useful for short-term treatment of insomnia. Their use beyond 2 to 4 weeks is not recommended due to the risk of dependence. It is preferred that benzodiazepines be taken intermittently and at the lowest effective dose. They improve sleep-related problems by shortening the time spent in bed before falling asleep, prolonging the sleep time, and, in general, reducing wakefulness.[21][22] Like alcohol, benzodiazepines are commonly used to treat insomnia in the short-term (both prescribed and self-medicated), but worsen sleep in the long-term. While benzodiazepines can put people to sleep (i.e., inhibit NREM stage 1 and 2 sleep), while asleep, the drugs disrupt sleep architecture: decreasing sleep time, delaying time to REM sleep, and decreasing deep slow-wave sleep (the most restorative part of sleep for both energy and mood).[23][24][25]

Other drawbacks of hypnotics, including benzodiazepines, are possible tolerance to their effects, rebound insomnia, and reduced slow-wave sleep and a withdrawal period typified by rebound insomnia and a prolonged period of anxiety and agitation.[26][27] The list of benzodiazepines approved for the treatment of insomnia is fairly similar among most countries, but which benzodiazepines are officially designated as first-line hypnotics prescribed for the treatment of insomnia can vary distinctly between countries.[22] Longer-acting benzodiazepines such as nitrazepam and diazepam have residual effects that may persist into the next day and are, in general, not recommended.[21]

Older adults should not use benzodiazepines to treat insomnia unless other treatments have failed to be effective.[28] When benzodiazepines are used, patients, their caretakers, and their physician should discuss the increased risk of harms, including evidence which shows twice the incidence of traffic collisions among driving patients as well as falls and hip fracture for all older patients.[3][28]

Their mechanism of action is primarily at GABAA receptors.[29]

Research on nonbenzodiazepines is new and conflicting. A review by a team of researchers suggests the use of these drugs for people that have trouble falling asleep but not staying asleep,[note 2] as next-day impairments were minimal.[31] The team noted that the safety of these drugs had been established, but called for more research into their long-term effectiveness in treating insomnia. Other evidence suggests that tolerance to nonbenzodiazepines may be slower to develop than with benzodiazepines.[failed verification] A different team was more skeptical, finding little benefit over benzodiazepines.[32]

Melatonin, the hormone produced in the pineal gland in the brain and secreted in dim light and darkness, among its other functions, promotes sleep in diurnal mammals.[33]

In common use, the term antihistamine refers only to compounds that inhibit action at the H1 receptor (and not H2, etc.).

Second-generation antihistamines cross the blood–brain barrier to a much lower degree than the first ones.[medical citation needed] This results in their primarily affecting peripheral histamine receptors, and therefore having a much lower sedative effect. High doses can still induce the central nervous system effect of drowsiness.

Some antidepressants have sedating effects.

Examples of antipsychotics with sedation as a side effect:[41]

The use of sedative medications in older people generally should be avoided. These medications are associated with poorer health outcomes, including cognitive decline.

Therefore, sedatives and hypnotics should be avoided in people with dementia according to the clinical guidelines known as the Medication Appropriateness Tool for Comorbid Health Conditions in Dementia (MATCH-D).[42] The use of these medications can further impede cognitive function for people with dementia, who are also more sensitive to side effects of medications.