Cheese, like this Brie de Meaux, is high in saturated fats, and is a popular food in French cuisine.

The French paradox is a catchphrase first used in the late 1980s, that summarizes the apparently paradoxical epidemiological observation that French people have a relatively low incidence of coronary heart disease (CHD), while having a diet relatively rich in saturated fats,[1] in apparent contradiction to the widely held belief that the high consumption of such fats is a risk factor for CHD. The paradox is that if the thesis linking saturated fats to CHD is valid, the French ought to have a higher rate of CHD than comparable countries where the per capita consumption of such fats is lower.

The French paradox implies two important possibilities. The first is that the hypothesis linking saturated fats to CHD is not completely valid (or, at the extreme, is entirely invalid). The second possibility is that the link between saturated fats and CHD is valid, but that some additional factor in the French diet or lifestyle mitigates this risk—presumably with the implication that if this factor can be identified, it can be incorporated into the diet and lifestyle of other countries, with the same lifesaving implications observed in France. Both possibilities have generated considerable media interest, as well as some scientific research.

It has also been suggested that the French paradox is an illusion, created in part by differences in the way that French authorities collect health statistics, as compared to other countries, and in part by the long-term effects, in the coronary health of French citizens, of changes in dietary patterns which were adopted years earlier.[2] Nevertheless the French diet may be considered to be a type of Mediterranean diet which has fairly well established benefits.[3]

Identifying and quantifying the French paradox[edit]

The term "French Paradox" was first used in The Letter, the newsletter of the International Organisation of Vine and Wine, in 1986. In 1989, theatre Professor George Riley Kernodle of the University of Arkansas used the term in a chapter in his book Theatre In History, later republished as a separate academic paper.[4]

In 1991, Serge Renaud, a scientist from Bordeaux University, France—considered today the father of the phrase—presented the results of his scientific study into the term and actual scientific data behind the perception of the phrase.[5] This was followed by a public documentary broadcast on the American CBS News television channel, 60 Minutes.

Renaud's observations regarding the apparent disconnect between French patterns of high saturated fat consumption and their low rates of cardiovascular disease can be quantified using data from the Food and Agriculture Organization of the United Nations.[6][non-primary source needed] In 2002, the average French person consumed 108 grams per day of fat from animal sources, while the average American consumed only 72 grams. The French eat four times as much butter, 60 percent more cheese and nearly three times as much pork. Although the French consume only slightly more total fat (171 g/d vs 157 g/d), they consume much more saturated fat because Americans consume a much larger proportion of fat in the form of vegetable oil, with most of that being soybean oil.[7] However, according to data from the British Heart Foundation,[8] in 1999, rates of death from coronary heart disease among males aged 35–74 years were 115 per 100,000 people in the U.S. but only 83 per 100,000 in France.

In 1991, Renaud extended his studies in partnership with then junior researchers, cardiologist Michel de Lorgeril and dietician Patricia Salen. The three enhanced Renaud's study, with their paper concluding that: a diet based on southwestern Mediterranean cuisine; which is high in omega-3 oils, antioxidants and includes "moderate consumption" of red wine; created lower cases of cancer, myocardial infarction and cardiovascular disease; partly through increasing HDL cholesterol whilst reducing LDL cholesterol.[5]

In 1999, Malcolm Law and Nicholas Wald published a study in the British Medical Journal,[2] using data from a 1994 study of alcohol and diet to explain how the French paradox might actually be an illusion, caused by two statistical distortions.

First, Law and Wald attributed about 20% of the difference in the observed rates of CHD between France and the United Kingdom to the under-certification of CHD in France, relative to the UK.

In addition, the French population has become increasingly overweight. A study published by the French Institute of Health and Medical Research (INSERM) revealed an increase in obesity from 8.5% in 1997 to 14.5% in 2009, with women showing a greater tendency toward obesity than men.[9]

Much commentary has been based on the assumption that the French paradox is real and is not the statistical distortion posited by Law and Wald. If the French paradox is regarded as real, the most obvious implication is that under certain circumstances, it is possible for individuals to consume a diet rich in saturated fats, and nonetheless avoid cardiovascular disease. Therefore, proposed explanations for the paradox have attracted considerable interest in other countries, including the creation of considerable demand for foods or supplements said to explain the paradox. The search for an explanation for the paradox has also led to some additional research.

The overall impact of the popular perception, in the English-speaking world, that the French paradox is a real phenomenon, has been to give added credibility to health claims associated with specific French dietary practices.

This was seen most dramatically when, in 1991, an early account of the then-novel concept of the French paradox was aired in the United States on 60 Minutes. The broadcast left the impression that France's high levels of red wine consumption accounted for much of the country's lower incidence of cardiac disease. Within a year, the consumption of red wine in the United States had increased by 40%[10] and some wine sellers began promoting their products as "health food."[11]

The cultural impact of the French paradox can be seen in the large number of book titles in the diet-and-health field which purport to give the reader access to the secrets behind the paradox:

Other books sought to boost their credibility by reference to the French paradox. The American edition of The Dukan Diet, written by Pierre Dukan, a Paris-based doctor, is marketed with the subtitle, “The real reason the French stay thin.”

The existence of the French paradox has caused some researchers to speculate that the link between dietary consumption of saturated fats and coronary heart disease might not be as strong as had previously been imagined. This has resulted in a review of the earlier studies which had suggested this link.

Some researchers have thrown into question the entire claimed connection between natural saturated fat consumption and cardiovascular disease. In 2006 this view received some indirect support from the results of the Nurses' Health Study run by the Women's Health Initiative. After accumulating approximately 8 years of data on the diet and health of 49,000 post-menopausal American women, the researchers found that the balance of saturated versus unsaturated fats did not appear to affect heart disease risk, whereas the consumption of trans fat was associated with significantly increased risk of cardiovascular disease.[12]

Similarly, the authors of a 2009 review of dietary studies concluded that there was insufficient evidence to establish a causal link between consumption of saturated fats and coronary heart disease risk.[13]

It has been suggested that France's high red wine consumption is a primary factor in the trend. This hypothesis was expounded in a 60 Minutes broadcast in 1991.[14] The program catalysed a large increase in North American demand for red wines from around the world. It is believed that one of the components of red wine potentially related to this effect is resveratrol;[15] however, the authors of a 2003 study concluded that the amount of resveratrol absorbed by drinkers of red wine is small enough that it is unlikely to explain the paradox.[16] 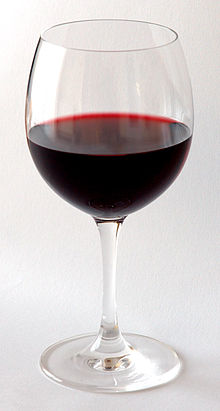 A glass of red wine

Research suggests that moderate drinkers are less likely to suffer heart attacks than are abstainers or heavy drinkers (see alcohol and cardiovascular disease for details). Therefore, the alcohol in wine might be a factor in the French paradox.

There is a lack of medical consensus about whether moderate consumption of beer, wine, or distilled spirits has a stronger association with longevity. Of ten major studies, three found stronger evidence for wine, three for beer, three for liquor, and one study found no difference between alcoholic beverages.[19]

Wines, particularly red wines, are a source of low levels of resveratrol. High doses of resveratrol have been linked to longevity and cancer prevention in other species.[20] Although research continues on resveratrol, the concentration in wine seems too low to account for the French paradox.

Oligomeric procyanidins have been proposed to offer protection to human vascular cells,[21] with other research indicating that red wine polyphenols reduce absorption of malondialdehyde which is implicated in elevating levels of low-density lipoprotein in the onset of arteriosclerosis.[22]

However, once digested and metabolized, the role of polyphenols to assert possible health effects in humans cannot be determined.[23] Although polyphenols are speculated to be part of the health-promoting effects of wine consumption, no evidence exists to date that ingesting polyphenols from red wine or food sources actually provides health benefits.[24]

Explanations based on aspects of the French diet[edit]

In his 2009 book Cholesterol and The French Paradox, Frank Cooper argues that the French paradox is due to the lack of hydrogenated and trans fats in the French diet.[25] The French diet is based on natural saturated fats such as butter, cheese and cream that the human body finds easy to metabolize, because they are rich in shorter saturated fatty acids ranging from the 4-carbon butyric acid to the 16-carbon palmitic acid. But the American diet includes greater amounts of saturated fats made via hydrogenating vegetable oils which include longer 18- and 20-carbon fatty acids. In addition, these hydrogenated fats include small quantities of trans fats which may have associated health risks.[26][27][28]

In his 2003 book, The Fat Fallacy: The French Diet Secrets to Permanent Weight Loss, Will Clower suggests the French paradox may be narrowed down to a few key factors, namely:

Clower tends to downplay the common beliefs that wine consumption and smoking are greatly responsible for the French paradox. While a higher percentage of French people smoke, this is not greatly higher than the U.S. (35% in France vs. 25% in U.S.) and is unlikely to account for the weight difference between countries.

Mireille Guiliano, author of the 2006 bestseller French Women Don't Get Fat,[29] agrees that the weight differences are not due to French smoking habits. She points out that the smoking rates for women in France and the U.S. are virtually identical.[30] Guiliano explains the key factors to the French woman's ability to stay slim as:

It has been suggested that a higher intake of fruit and vegetables in the diet may lower the risk of cardiovascular diseases.[32]

One proposed explanation of the French paradox regards possible effects (epigenetic or otherwise) of dietary improvements in the first months and years of life, exerted across multiple generations. Following defeat in the Franco-Prussian War in 1871, the French government introduced an aggressive nutritional program providing high quality foods to pregnant women and young children with the aim of fortifying future generations of soldiers (the program was implemented about three decades prior to an analogous initiative in England in response to the Boer War). It has been suggested that the particular timing of this historical intervention might help explain the relatively low rates of obesity and heart disease found in France.[33]