Coniine refers to a poisonous chemical compound, an alkaloid present in and isolable from poison hemlock (Conium maculatum), where its presence has been a source of significant economic, medical, and historico-cultural interest; coniine is also produced by the yellow pitcher plant (Sarracenia flava), and fool's parsley (Aethusa cynapium). Its ingestion and extended exposure are toxic to humans and all classes of livestock; its mechanism of poisoning involves disruption of the central nervous system, with death caused by respiratory paralysis. The biosynthesis of coniine contains as its penultimate step the non-enzymatic cyclisation of 5-oxooctylamine to γ-coniceine, a Schiff base differing from coniine only by its carbon-nitrogen double bond in the ring. This pathway results in natural coniine that is a mixture—a racemate—composed of two enantiomers, the stereoisomers (S)-(+)-coniine and (R)-(−)-coniine, depending on the direction taken by the chain that branches from the ring. Both enantiomers are toxic, with the (R)-enantiomer being the more biologically active and toxic of the two in general. Coniine holds a place in organic chemistry history as being the first of the important class of alkaloids to be synthesized, by Albert Ladenburg in 1886, and it has been synthesized in the laboratory in a number of unique ways through to modern times.

Hemlock poisoning has been a periodic human concern, a regular veterinary concern, and has had significant occurrences in human and cultural history. Notably, in 399 BC, Socrates, when he was sentenced to death, chose to die by drinking a coniine-containing mixture of poison hemlock.

Poison hemlock (Conium maculatum) contains highly toxic amounts of coniine. Its presence on farmland is an issue for livestock farmer because animals will eat it if they are not well fed or the hemlock is mixed in with pasture grass.[1] The coniine is present in Conium maculatum as a mixture of the R-(−)- and S-(+)-enantiomers.[2] 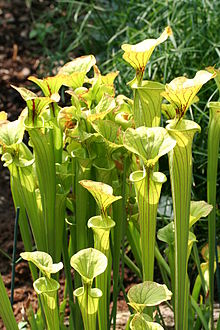 Coniine is also found in Sarracenia flava, the yellow pitcher plant.[3][non-primary source needed][better source needed] The yellow pitcher plant is a carnivorous plant found exclusively in the southeastern United States. The plant uses a mixture of sugar and coniine to simultaneously attract and poison insects, which then fall into a digestive tube.[4] Coniine is also found in Aethusa cynapium, commonly known as fool's parsley.[5]

The history of coniine is understandably tied to the poison hemlock plant, since the natural product was not synthesizable until the 1880s.[6] The most famous hemlock poisoning occurred in 399 BCE, when the philosopher Socrates is believed to have consumed a liquid infused with hemlock to carry out his death sentence, his having been convicted of impiety toward the gods, and the corruption of youth.[7][8][9] Hemlock juice was often used to execute criminals in ancient Greece.[10]

Hemlock has had a limited medical use throughout history. The Greeks used it not just as capital punishment, but also as an antispasmodic and treatment for arthritis.[citation needed] Books from the 10th century attest to medical use by the Anglo-Saxons.[11] In the Middle Ages it was believed that hemlock could be used to cure rabies;[citation needed] in later European times it came to be associated with flying ointments in witchcraft.[citation needed] Native Americans used hemlock extract as arrow poison.[12]

While the yellow pitcher plant and fool's parsley also contain coniine, there are no reports of traditional uses for these plants.[citation needed]

The (R)-(−) enantiomer of coniine is the more biologically active, at least in one system (TE-671 cells expressing human fetal nicotinic neuromuscular receptors), and in mouse bioassay, the same enantiomer and the racemic mixture are about two-fold more toxic than the (S)-(+) enantiomer (see below).[2]

Coniine, as racemate or as pure enantiomer, begins by binding and stimulating the nicotinic receptor on the post-synaptic membrane of the neuromuscular junction. The subsequent depolarization results in nicotinic toxicity; as coniine stays bound to the receptor, the nerve stays depolarized, inactivating it.[13] This results, systemically, in a flaccid paralysis, an action similar to that of curare.[citation needed] Symptoms of paralysis generally occur within a half-hour, although death may take several hours.[citation needed] The central nervous system is not affected: the person remains conscious and aware until respiratory paralysis results in cessation of breathing.[citation needed] The flaccid, muscular paralysis is an ascending paralysis, lower limbs being first affected.[citation needed] The person may have a hypoxic convulsion just prior to death, disguised by the muscular paralysis such that the person may just weakly shudder.[citation needed] Cause of death is lack of oxygen to the brain and heart as a consequence of respiratory paralysis, so that a poisoned person may recover if artificial ventilation can be maintained until the toxin is removed from the victim's system.

(+/–)-Coniine was first isolated by Giesecke,[14] but the formula was suggested by Blyth[15] and definitely established by Hoffmann.[16][17]

Coniine is slightly soluble (1 in 90) in cold water, less so in hot water, so that a clear cold solution becomes turbid when warmed. On the other hand, the base dissolves about 25% of water at room temperature. It mixes with alcohol in all proportions, is readily soluble in ether and most organic solvents. Coniine dissolves in carbon disulfide, forming a complex thiocarbamate.[20][21]

Coniine solidifies into a soft crystalline mass at −2 °C. It slowly oxidizes in the air. The salts crystallize well and are soluble in water or alcohol. The hydrochloride, B•HCl, crystallizes from water in rhombs, mp. 220 °C, [α]20°D +10.1°; the hydrobromide, in needles, mp. 211 °C, and the D-acid tartrate, B•C4H6O6•2 H2O, in rhombic crystals, mp. 54 °C. The platinichloride, (B•HCl)2•PtCl4•H2O, separates from concentrated solution as an oil, which solidifies to a mass of orange-yellow crystals, mp. 175 °C (dry). The aurichloride, B•HAuCl4, crystallizes on standing, mp. 77 °C. The picrate forms small yellow needles, mp. 75 °C, from hot water. The 2,4-dinitrobenzoyl- and 3,5-dinitrobenzoyl-derivates have mps. 139.0–139.5 °C and 108–9 °C respectively.[22] The precipitate afforded by potassium cadmium iodide solution is crystalline, mp. 118 °C, while that given by nicotine with this reagent is amorphous.

Coniine gives no coloration with sulfuric or nitric acid. Sodium nitroprusside gives a deep red color, which disappears on warming, but reappears on cooling, and is changed to blue or violet by aldehydes.[23]

The original synthesis (shown in the scheme below) of Coniine was performed by Ladenburg in 1886.[28] Ladenburg heated an iodide salt of N-methylpyridine to 250 °C, obtaining 2-methylpyridine. He then performed Knoevenagel condensation with acetaldehyde in anhydrous zinc chloride to yield 2-propenylpyridine. In fact, Ladenburg used paraldehyde, a cyclic trimer of acetaldehyde that readily forms acetaldehyde upon heating. Finally, 2-propenylpyridine was reduced with metallic sodium in ethanol to provide racemic (±) coniine. Fractional crystallisation of racemic coniine with (+)-tartaric acid yielded enantiopure coniine.

The scheme proposed by Ladenburg gave poor yields, so the quest for alternative routes was open. A slightly better yield is observed if 2-methylpyridine and acetaldehyde are heated in a sealed tube with hydrochloric acid for 10 hours. A mixture of 2-propenylpyridine and 2-chloropropylpyridine is formed and is subsequently reduced by sodium in ethanol to give rac-coniine. Note: although the scheme below shows a signle enantiomer of coniine, the final reaction produces a racemic mixture that is then separated

In 1907, another route with better yield was proposed. First, 2-(2'-hydroxypropyl)pyridine is reduced with phosphorus and fuming hydroiodic acid at 125 °C. Second, the product is treated with zinc dust and water. Finally, the product of the second step is treated with sodium in ethanol.[29] Note: although the scheme below shows a signle enantiomer of coniine, the final reaction produces a racemic mixture that is then separated

A number of other syntheses of coniine have been effected,[30] of which that of Diels and Alder is of special interest.[31] The initial adduct of pyridine and dimethyl acetylenedicarboxylate is tetramethylquinolizine-1,2,3,4-tetracarboxylate, which on oxidation with dilute nitric acid is converted into trimethyl indolizine-tricarboxylate. This, on hydrolysis and decarboxylation, furnishes indolizine, the octahydro-derivate of which, also known as octahydropyrrocoline[32] is converted by the cyanogen bromide method successively into the bromocyanoamide, cyanoamide and rac.-coniine. A synthesis of the alkaloid, starting from indolizine (pyrrocoline) is described by Ochiai and Tsuda.[33]

The preparation of L-(R)-coniine by the reduction of β-coniceine (L-propenylpiperidine) by Löffler and Friedrich[19] provides means for converting conhydrine to L-(R)-coniine.[34] Hess and Eichel reported,[35] incorrectly,[36] that pelletierine was the aldehyde (β-2-piperidyl-propaldehyde) corresponding to coniine, and yielded rac-coniine when its hydrazone was heated with sodium ethoxide in ethanol at 156–170 °C. According to these authors, D-(S)-coniine is rendered almost optically inactive when heated with barium hydroxide and alcohol at 180–230 °C. Leithe[37] has shown by observation of the optical rotation of (+)-pipecolic acid (piperidine-2-carboxylic acid) and some of its derivatives under varying conditions,[38] that it must belong to the D-series of amino acids.

Currently, Coniine, and many other alkaloids, can be synthesized stereoselectively.[27] For example, Pd-catalyzed 1,3-chirality transfer reaction can stereospecifically transform a single enantiomer of an allyl alcohol into a cyclic structure (in this case a piperidine).[39] In this way, starting from (S)-alcohol an (S)-enantiomer of Coniine is obtained and vice-versa. Remarkably, the separation of racemic alcohol into different enantiomers is done with the help of Candida antarctica lipase.

The biosynthesis of coniine is still being investigated, much of the pathway has been elucidated. Originally thought to use 4 acetyl groups as feed compounds for the polyketide synthase that forms coniine,[40] it is in fact derived from two malonyl and a butyryl CoA, which are derived in the usual way from acetyl-CoA.[41]

The R and S 2-Propylpiperidine stereoisomers are a neurotoxin present in a slug-like lifeform in The Expanse. The toxin is shown as causing almost instant death upon skin contact in the show.