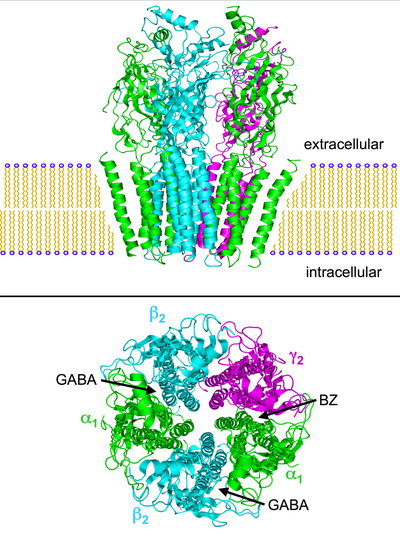 Structure of the nicotinic acetylcholine receptor (nAchR: PDB: 2BG9​) which is very similar to the GABAA receptor.[1][2][3] Top: side view of the nAchR embedded in a cell membrane. Bottom: view of the receptor from the extracellular face of the membrane. The subunits are labeled according to the GABAA nomenclature and the approximate locations of the GABA and benzodiazepine (BZ) binding sites are noted (between the α- and β-subunits and between the α- and γ-subunits respectively). 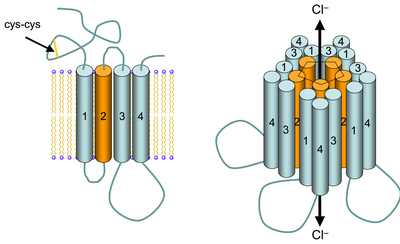 Schematic structure of the GABAA receptor. Left: GABAA monomeric subunit embedded in a lipid bilayer (yellow lines connected to blue spheres). The four transmembrane α-helices (1–4) are depicted as cylinders. The disulfide bond in the N-terminal extracellular domain which is characteristic of the family of cys-loop receptors (which includes the GABAA receptor) is depicted as a yellow line. Right: Five subunits symmetrically arranged about the central chloride anion conduction pore. The extracellular loops are not depicted for the sake of clarity.

The GABAA receptor (GABAAR) is an ionotropic receptor and ligand-gated ion channel. Its endogenous ligand is γ-aminobutyric acid (GABA), the major inhibitory neurotransmitter in the central nervous system. Upon opening, the GABAA receptor is selectively permeable to chloride ions (Cl−) and, to a lesser extent, bicarbonate ions (HCO3−).[4][5] Depending on the membrane potential and the ionic concentration difference, this can result in ionic fluxes across the pore. For instance, under physiological conditions Cl− will flow inside the cell if the membrane potential is higher than the equilibrium potential (also known as the reversal potential) for chloride ions if the receptor is activated.[6] This causes an inhibitory effect on neurotransmission by diminishing the chance of a successful action potential occurring at the postsynaptic cell. The reversal potential of the GABAA-mediated inhibitory postsynaptic potential (IPSP) in normal solution is −70 mV, contrasting the GABAB IPSP (-100 mV).

The active site of the GABAA receptor is the binding site for GABA and several drugs such as muscimol, gaboxadol, and bicuculline.[7] The protein also contains a number of different allosteric binding sites which modulate the activity of the receptor indirectly. These allosteric sites are the targets of various other drugs, including the benzodiazepines, nonbenzodiazepines, neuroactive steroids, barbiturates, alcohol (ethanol),[8] inhaled anaesthetics, kavalactones, and picrotoxin, among others.[9]

GABAA receptors occur in all organisms that have a nervous system. To a limited extent the receptors can be found in non-neuronal tissues. Due to their wide distribution within the nervous system of mammals they play a role in virtually all brain functions.

Different benzodiazepines have different affinities for GABAA receptors made up of different collection of subunits, and this means that their pharmacological profile varies with subtype selectivity. For instance, benzodiazepine receptor ligands with high activity at the α1 and/or α5 tend to be more associated with sedation, ataxia and amnesia, whereas those with higher activity at GABAA receptors containing α2 and/or α3 subunits generally have greater anxiolytic activity.[14] Anticonvulsant effects can be produced by agonists acting at any of the GABAA subtypes, but current research in this area is focused mainly on producing α2-selective agonists as anticonvulsants which lack the side effects of older drugs such as sedation and amnesia.

The binding site for benzodiazepines is distinct from the binding site for barbiturates and GABA on the GABAA receptor, and also produces different effects on binding,[15] with the benzodiazepines increasing the frequency of the chloride channel opening, while barbiturates increase the duration of chloride channel opening when GABA is bound.[16] Since these are separate modulatory effects, they can both take place at the same time, and so the combination of benzodiazepines with barbiturates is strongly synergistic, and can be dangerous if dosage is not strictly controlled.

Also note that some GABAA agonists such as muscimol and gaboxadol do bind to the same site on the GABAA receptor complex as GABA itself, and consequently produce effects which are similar but not identical to those of positive allosteric modulators like benzodiazepines.[citation needed] 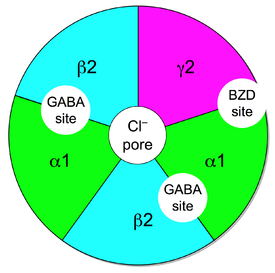 Schematic diagram of a GABAA receptor protein ((α1)2(β2)2(γ2)) which illustrates the five combined subunits that form the protein, the chloride (Cl−) ion channel pore, the two GABA active binding sites at the α1 and β2 interfaces, and the benzodiazepine (BZD) allosteric binding site[1]

Structural understanding of the GABAA receptor was initially based on homology models, obtained using crystal structures of homologous proteins like Acetylcholine binding protein (AChBP) and nicotinic acetylcholine (nACh) receptors as templates.[17][18] The much sought structure of a GABAA receptor was finally resolved, with the disclosure of the crystal structure of human β3 homopentameric GABAA receptor.[19] Whilst this was a major development, the majority of GABAA receptors are heteromeric and the structure did not provide any details of the benzodiazepine binding site. This was finally elucidated in 2018 by the publication of a high resolution cryo-EM structure of rat α1β1γ2S receptor[20] and human α1β2γ2 receptor bound with GABA and the neutral benzodiazepine flumazenil.[21]

GABAA receptors are pentameric transmembrane receptors which consist of five subunits arranged around a central pore. Each subunit comprises four transmembrane domains with both the N- and C-terminus located extracellularly. The receptor sits in the membrane of its neuron, usually localized at a synapse, postsynaptically. However, some isoforms may be found extrasynaptically.[22] When vesicles of GABA are released presynaptically and activate the GABA receptors at the synapse, this is known as phasic inhibition. However, the GABA escaping from the synaptic cleft can activate receptors on presynaptic terminals or at neighbouring synapses on the same or adjacent neurons (a phenomenon termed ‘spillover’) in addition to the constant, low GABA concentrations in the extracellular space results in persistent activation of the GABAA receptors known as tonic inhibition.[23]

The ligand GABA is the endogenous compound that causes this receptor to open; once bound to GABA, the protein receptor changes conformation within the membrane, opening the pore in order to allow chloride anions (Cl−) and, to a lesser extent, bicarbonate ions (HCO−) to pass down their electrochemical gradient. Because the reversal potential for chloride in most mature neurons is close to or more negative than the resting membrane potential, activation of GABAA receptors tends to stabilize or hyperpolarise the resting potential, and can make it more difficult for excitatory neurotransmitters to depolarize the neuron and generate an action potential. The net effect therefore typically inhibitory, reducing the activity of the neuron, although depolarizing currents have been observed in response to GABA in immature neurons in early development due to a modified Cl− gradient wherein the anions leave the cells through the GABAA receptors since their intracellular concentration is higher than the extracellular.[24] This is presumably due to the activity of chloride transports, such as NKCC1, transporting chloride into the cell which are present early in development, whereas, for instance, KCC2 transports chloride out of the cell and it is the dominant factor in establishing the chloride gradient later in development. These depolarization events have shown to be key in neuronal development.[25] In the mature neuron, the GABAA channel opens quickly and thus contributes to the early part of the inhibitory post-synaptic potential (IPSP).[26][27] The endogenous ligand that binds to the benzodiazepine site is inosine.[28][citation needed]

GABAA receptors are members of the large pentameric ligand gated ion channel (previously referred to as "Cys-loop" receptors) super-family of evolutionarily related and structurally similar ligand-gated ion channels that also includes nicotinic acetylcholine receptors, glycine receptors, and the 5HT3 receptor. There are numerous subunit isoforms for the GABAA receptor, which determine the receptor's agonist affinity, chance of opening, conductance, and other properties.[29]

In humans, the units are as follows:[30]

There are three ρ units (GABRR1, GABRR2, GABRR3); however, these do not coassemble with the classical GABAA units listed above,[31] but rather homooligomerize to form GABAA-ρ receptors (formerly classified as GABAC receptors but now this nomenclature has been deprecated[32]).

GABAA receptors are responsible for most of the physiological activities of GABA in the central nervous system, and the receptor subtypes vary significantly. Subunit composition can vary widely between regions and subtypes may be associated with specific functions. The minimal requirement to produce a GABA-gated ion channel is the inclusion of an α and a β subunit.[33] The most common GABAA receptor is a pentamer comprising two α's, two β's, and a γ (α2β2γ).[30] In neurons themselves, the type of GABAA receptor subunits and their densities can vary between cell bodies and dendrites.[34] GABAA receptors can also be found in other tissues, including leydig cells, placenta, immune cells, liver, bone growth plates and several other endocrine tissues. Subunit expression varies between 'normal' tissue and malignancies, as GABAA receptors can influence cell proliferation.[35]

A number of ligands have been found to bind to various sites on the GABAA receptor complex and modulate it besides GABA itself.[which?] A ligand can possess one or more properties of the following types. Unfortunately the literature often does not distinguish these types properly.

Ligands which contribute to receptor activation typically have anxiolytic, anticonvulsant, amnesic, sedative, hypnotic, euphoriant, and muscle relaxant properties. Some such as muscimol and the z-drugs may also be hallucinogenic.[citation needed] Ligands which decrease receptor activation usually have opposite effects, including anxiogenesis and convulsion.[citation needed] Some of the subtype-selective negative allosteric modulators such as α5IA are being investigated for their nootropic effects, as well as treatments for the unwanted side effects of other GABAergic drugs.[48]

A useful property of the many benzodiazepine site allosteric modulators is that they may display selective binding to particular subsets of receptors comprising specific subunits. This allows one to determine which GABAA receptor subunit combinations are prevalent in particular brain areas and provides a clue as to which subunit combinations may be responsible for behavioral effects of drugs acting at GABAA receptors. These selective ligands may have pharmacological advantages in that they may allow dissociation of desired therapeutic effects from undesirable side effects.[49] Few subtype selective ligands have gone into clinical use as yet, with the exception of zolpidem which is reasonably selective for α1, but several more selective compounds are in development such as the α3-selective drug adipiplon. There are many examples of subtype-selective compounds which are widely used in scientific research, including:

There are multiple indications that paradoxical reactions upon – for example – benzodiazepines, barbiturates, inhalational anesthetics, propofol, neurosteroids, and alcohol are associated with structural deviations of GABAA receptors. The combination of the five subunits of the receptor (see images above) can be altered in such a way that for example the receptor's response to GABA remains unchanged but the response to one of the named substances is dramatically different from the normal one.

There are estimates that about 2–3 % of the general population may suffer from serious emotional disorders due to such receptor deviations, with up to 20% suffering from moderate disorders of this kind. It is generally assumed that the receptor alterations are, at least partly, due to genetic and also epigenetic deviations. There are indication that the latter may be triggered by, among other factors, social stress or occupational burnout.[51][52][53][54]