Vox is an American news and opinion website owned by Vox Media. The website was founded in April 2014 by Ezra Klein, Matt Yglesias, and Melissa Bell, and is noted for its concept of explanatory journalism.[1] Vox's media presence also includes a YouTube channel, several podcasts, and a show presented on Netflix. Vox has been described as left-of-center[2] and progressive.[3]

Prior to founding Vox, Ezra Klein worked for The Washington Post as the head of Wonkblog, a public policy blog.[4] When Klein attempted to launch a new site using funding from the newspaper's editors, his proposal was turned down and Klein subsequently left The Washington Post for a position with Vox Media, another communications company, in January 2014.[4][5]

The New York Times' David Carr associated Klein's exit for Vox with other "big-name journalists" leaving newspapers for digital start-ups, such as Walter Mossberg and Kara Swisher (of Recode, which was later acquired by and integrated into Vox), David Pogue, and Nate Silver.[5] He described Vox Media as "a technology company that produces media" rather than its inverse, associated with "Old Media".[5] From his new position, Klein worked towards the establishing of Vox, including hiring new journalists for the site.[4] Klein expected to "improve the technology of news" and build an online platform better equipped for making news understandable.[5] The new site's 20-person staff was chosen for their expertise in topic areas and included Slate's Matthew Yglesias, Melissa Bell, and Klein's colleagues from The Washington Post.[5][6][7][8] Vox was launched on April 6, 2014, with Klein serving as editor-in-chief.[4][9]

Klein's opening editorial essay, "How politics makes us stupid", explained his distress about political polarization in the context of Yale Law School professor Dan Kahan's theories on how people protect themselves from information that conflicts with their core beliefs.[10][11]

In June 2016, Vox suspended contributor Emmett Rensin for a series of tweets calling for anti-Trump riots, including one on June 3, 2016, that urged, "If Trump comes to your town, start a riot." The tweets drew attention after violent anti-Trump protests took place in San Jose, California, on the day of Rensin's tweet.[12][13][14][15] Elizabeth Plank was hired in 2016 as a political correspondent,[16] and in 2017 launched her own series with Vox Media, called Divided States of Women.[17]

In September 2017, Klein published a post on Vox announcing that he was taking on a new role as editor-at-large, and that Lauren Williams, who joined Vox a few months after its founding, was the new editor-in-chief.[18][19] In late 2020, Klein, Williams, and Yglesias left the site. While Vox had been founded with prominent journalists, Vox Media CEO Jim Bankoff said that their brands had mature, mainstream audiences that no longer relied on personalities.[20]

Swati Sharma was named editor-in-chief in February 2021. A managing editor of The Atlantic at the time of her appointment, she was expected to assume the position in March 2021.[21]

According to Vox's founding editors, the site seeks to explain news by providing additional contextual information not usually found in traditional news sources.[22] To reuse work from authors prior to the relaunch in 2014, Vox creates "card stacks" in bright canary yellow that provide context and define terms within an article. The cards are perpetually maintained as a form of "wiki page written by one person with a little attitude".[23] As an example, a card about the term "insurance exchange" may be reused on stories about the Affordable Care Act.[23]

Vox's Future Perfect, a reporting project that examines the world through philanthropy and effective altruism, is funded by the Rockefeller Foundation.[24]

Vox has a YouTube channel by the same name where they have regularly posted videos on news and informational subjects since 2014.[25] These videos are accompanied by an article on their website. The themes covered in the videos are usually similar to the themes covered in the regular, written articles on the website.[26] The channel has over 10 million subscribers and over 2.6 billion views as of November 5, 2021[update].[25] Content surrounds current affairs, timeline of certain events, and interesting facts.[27] 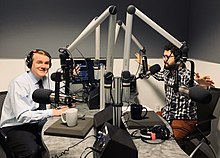 Zack Beauchamp interviewing Michael Bennet for the Worldly podcast in 2019

In March 2014, before it had officially launched, Vox was criticized by conservative media commentators, including Erick Erickson, for a video[45] it had published arguing the U.S. public debt "isn't a problem right now".[46]

The website's launch received significant media attention.[47] Websites noted that the launch came around the same time as other data and explainer websites like FiveThirtyEight and the New York Times' The Upshot.[48][49] Vox was described as trying to act as a "Wikipedia for ongoing news stories".[47]

Pascal-Emmanuel Gobry at The Week argued that the website produced "partisan commentary in question-and-answer disguise" and criticized the site for having a "starting lineup [that] was mostly made up of ideological liberals".[50] The Week's Ryu Spaeth described the site's operations as "...essentially tak[ing] the news (in other words, what is happening in the world at any given moment in time) and fram[ing] it in a way that appeals to its young, liberal audience."[51]

The Economist, commenting on Klein's launching essay "How politics makes us stupid",[10] said the website was "bright and promising" and site's premise of "more, better, and more lucidly presented information" was "profoundly honourable", and positively compared the site's mission to John Keats's negative capability.[11] In an opinion piece in The Washington Times, Christopher J. Harper criticized the site for numerous reporting mistakes.[52]

In 2015, the Committee for Skeptical Inquiry presented Julia Belluz the Robert B. Balles Prize for Critical Thinking for her work on Vox.[53]

In a 2017 interview on Nieman Lab, Klein stated: "We watch our audience data pretty closely, and our audience data does not show or suggest to us that we are overwhelmingly read on one side or the other of the political sphere, which is good.[60]