The Denver Post is a daily newspaper and website published in Denver, Colorado. As of June 2022, it has an average print circulation of 57,265.[2] In 2016, its website received roughly six million monthly unique visitors generating more than 13 million page views, according to comScore.[3]

The Post was the flagship newspaper of MediaNews Group Inc., founded in 1983 by William Dean "Dinky" Singleton and Richard Scudder. MediaNews is today one of the nation's largest newspaper chains, publisher of 61 daily newspapers and more than 120 non-daily publications in 13 states. MediaNews bought The Denver Post from the Times Mirror Co. on December 1, 1987. Times Mirror had bought the paper from the heirs of founder Frederick Gilmer Bonfils in 1980.

Since 2010, The Denver Post has been owned by hedge fund Alden Global Capital, which acquired its bankrupt parent company, MediaNews Group.[4] In April 2018, a group called "Together for Colorado Springs" said that it was raising money to buy the Post from Alden Global Capital, stating: “Denver deserves a newspaper owner who supports its newsroom.”[5] 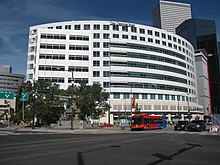 A new group of owners with similar political ambitions raised $100,000 and resurrected the paper in June 1894. On October 28, 1895, Harry Heye Tammen, former bartender[6] and owner of a curio and souvenir shop, and Frederick Gilmer Bonfils, a Kansas City real estate and lottery operator, purchased the Evening Post for $12,500. Neither had newspaper experience, but they were adept at the business of promotion and finding out what people wanted to read.

Among well-known Post reporters were Gene Fowler, Frances Belford Wayne, and "sob sister" Polly Pry. Damon Runyon worked briefly for the Post in 1905–1906 before gaining fame as a writer in New York.[7]

After the deaths of Tammen and Bonfils in 1924 and 1933, Helen and May Bonfils, Bonfils' daughters, became the principal owners of the Post. In 1946, the Post hired Palmer Hoyt away from the Portland Oregonian to become editor and publisher of the Post and to give the paper a new direction.[8][9] With Hoyt in charge, news was reported fairly and accurately. He took editorial comment out of the stories and put it on an editorial page. He called the page The Open Forum and it continues today.

The Post launched a staff expansion program in 2001, but declining advertising revenue led to a reduction of the newsroom staff in 2006 and 2007 through layoffs, early-retirement packages, voluntary-separation buyouts and attrition. The most recent round of announced buyouts occurred in June 2016.[10][11][12]

In 2013, just before legalization in Colorado, The Denver Post initiated an online media brand The Cannabist to cover cannabis-related issues.[13] First led by Editor in Chief Ricardo Baca, the online publication has surged in popularity, beating the industry veteran High Times in September 2016.[14] Thirty layoffs were announced for The Post in March 2018, according to the Denver Business Journal.[15]

On September 7, 2011, John Paton – the CEO of Journal Register Company – was appointed CEO of MediaNews Group,[16] replacing Singleton, who stayed on as the Post's publisher and CEO of MediaNews until his retirement in 2013.[17] He remains non-executive chairman of the organization. With the move, the Post also entered into an agreement with the newly created Digital First Media, led by Paton, that would provide management services and lead the execution of the company's business strategy in conjunction with Journal Register. Paton stepped down as CEO of Digital First in June 2015, and was succeeded by longtime MediaNews executive Steve Rossi.[18]

In 2017, The Denver Post announced that its headquarters were moving to its printing plant in North Washington, Adams County.[19]

The operation of The Denver Post by Digital First Media, under the ownership of Alden Global Capital, has come under extensive criticism from workers at the newspaper and outside the organization.[20] The hedge fund has made "relentless cost cuts" since taking ownership in 2010, despite the reported profitability of the Post, principally by laying off the newspaper's staff. Margaret Sullivan of The Washington Post called Alden Global Capital "one of the most ruthless of the corporate strip-miners seemingly intent on destroying local journalism."[21] Under Digital Media First, the number of journalists in the newsroom was reduced by almost two-thirds by April 2018, to around 70 people.[22] This represents a drastic fall from the over 250 journalists which The Denver Post employed before 2010, when it was purchased by Alden Media Group.[23] At one point before 2009, the joint-operating agreement between The Denver Post and The Rocky Mountain News boasted a 600-strong staff of journalists, before the bankruptcy of the Rocky Mountain News that year.[21]

The announcement of 30 more layoffs in March 2018, which reduced the paper's newsroom from 100 to around 70 people, prompted a denunciation of its owners from the editorial board of The Denver Post. The editorial decried Alden Global Capital as "vulture capitalists" who were "strip-mining" the newspaper; it concluded that "Denver deserves a newspaper owner who supports its newsroom. If Alden isn't willing to do good journalism here, it should sell the Post to owners who will."[21] The editorial board pointed out that the cuts were hamstringing the ability of the Post to provide quality coverage of the fast-growing Denver region, and compared the size of its newsroom unfavorably to those of other newspapers in cities of comparable or smaller size to Denver.[23] Alden's "harvesting strategy" is what prompted Greg Moore, editor of The Denver Post from 2002 to 2016, to step down.[21]

The "open revolt" of the Denver Post against its owners garnered support and praise from other newspapers and journalists, including Mitchell Landsberg of the Los Angeles Times and Joe Nocera of Bloomberg View.[22]

In February 2014, The Denver Post began publishing a section entitled "Energy and Environment", funded by Coloradans for Responsible Energy Development (CRED), a pro–natural gas group. The stories in the section are written by outsiders, not by DP reporters. A banner across the top of the section reads "This Section is Sponsored by CRED". Nevertheless, critics express concern that the section risks confusing readers about the distinction between advertising and reporting.[40]

Another controversy arose in late January 2020, when Jon Caldara of the Denver-based Independence Institute, who had long written a weekly column for the Denver Post, was fired after publishing two conservative articles on sex and gender.[41][42] In a column arguing for greater openness in public affairs, excoriating the Colorado legislature for avoiding the legally required referendum on a new state tax by repackaging it as a “fee” — and then prohibiting hospitals from listing the fee on patients’ bills. On the same theme, he criticized the state’s educational authorities for imposing a speech code forbidding speech considered “stigmatizing”. “In case you hadn’t noticed,” he wrote, “just about everything is stigmatizing to the easily triggered, perpetually offended.” Continuing on his theme of transparency, he also complained that the schools were not doing enough to make parents aware of the contents of their sex-ed curricula. While Caldara believes his "insistence" on the existence of only two sexes was "the last straw" for his column, he emphasizes "the reason for my firing is over a difference in style."[43] He was officially fired for failing to use "respectful language" and the lack of a "collaborative and professional manner."[44]