Skip to content
Legislative branch of the state government of Maryland

The Maryland General Assembly is the state legislature of the U.S. state of Maryland that convenes within the State House in Annapolis. It is a bicameral body: the upper chamber, the Maryland Senate, has 47 representatives and the lower chamber, the Maryland House of Delegates, has 141 representatives. Members of both houses serve four-year terms. Each house elects its own officers, judges the qualifications and election of its own members, establishes rules for the conduct of its business, and may punish or expel its own members.

The General Assembly meets each year for 90 days to act on more than 2,300 bills including the state's annual budget, which it must pass before adjourning sine die. The General Assembly's 441st session convened on January 9, 2020.[2]

The forerunner of the Maryland General Assembly was the colonial institution, an Assembly of Free Marylanders (and also Council of Maryland). Maryland's foundational charter created a state ruled by the Palatine lord, Lord Baltimore. As ruler, Lord Baltimore owned directly all of the land granted in the charter, and possessed absolute authority over his domain.

However, as elsewhere in British North America, British political institutions were re-created in the colonies, and the Maryland General Assembly fulfilled much the same function as the House of Commons.[3] An act was passed providing that:

from henceforth and for ever everyone being of the council of the Province and any other gentleman of able judgement summoned by writ (and the Lord of every Manor within this Province after Manors be erected) shall and may have his voice, seat, and place in every General Assembly ... together with two or more able and sufficient men for the hundred as the said freedmen or the major part of them ... shall think good.

In addition, the Lord Proprietor could summon any delegates whom he desired.[4]

In some ways the General Assembly was an improvement upon the institutions of the mother country. In 1639, noting that Parliament had not been summoned in England for a decade, the free men of Maryland passed an act to the effect that "assemblies were to be called once in every three years at the least", ensuring that their voices would be regularly heard.[3]

During the American Revolution the colonial Assembly ceased to exist, and was replaced by its modern successor.

Starting in 1867, the Assembly became increasingly unrepresentative. As the population of Baltimore increased, it and other urban areas were not granted additional seats. By 1918, the city's population had increased 175% while the entire state gained only 46% with no reallocation of political power.[5]

Due to the COVID-19 pandemic, the General Assembly adjourned early on March 18, 2020, for the first time since the Civil War.[6]

Each senator or delegate must be a U.S. citizen and a resident of Maryland for at least one year preceding his or her election. A prospective legislator must have resided in the legislative district the candidate seeks to represent for the six months prior to election. A senator must be at least twenty-five years of age at the time of election and a delegate at least twenty-one. Military officers other than members of the reserves are not eligible for election to the General Assembly.

Each term lasts four years. However, members of the General Assembly are not term-limited. If a vacancy occurs in either house through death, resignation, or disqualification, the Governor of Maryland appoints a replacement whose name is submitted by the State Central Committee of the same political party as the legislator whose seat is to be filled. 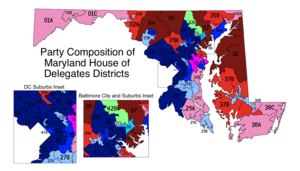 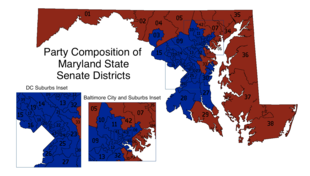 Districts and party composition of the Maryland Senate

The Senate is led by a President and the House by a Speaker whose respective duties and prerogatives enable them to influence the legislative process significantly. The President and the Speaker appoint the members of most committees and name their chairs and vice-chairs, except in the case of the Joint Committee on Investigation whose members elect their own officers. The President and Speaker preside over the daily sessions of their respective chambers, maintaining decorum and deciding points of order. As legislation is introduced, they assign it to a standing committee for consideration and a public hearing. The president pro tempore appoints majority and minority whips and leaders.

A bill is a proposal to change, repeal, or add to existing state law. A House Bill (HB) is one introduced in the House of Delegates (for example: HB 6);[7] a Senate Bill (SB), in the Senate.

The legislative procedure, is divided into distinct stages:

Legislators pose as Governor O'Malley signs a bill into law at a signing ceremony in Annapolis, Maryland, on May 13, 2008.