KPNX, virtual and VHF digital channel 12, is an NBC-affiliated television station serving Phoenix, Arizona, United States that is licensed to the suburb of Mesa. The station is owned by Tegna Inc. KPNX's studios are located at the Republic Media building on Van Buren Street in downtown Phoenix (which also houses formerly co-owned newspaper The Arizona Republic), and its transmitter is located atop South Mountain on the city's south side.

KNAZ-TV (channel 2) in Flagstaff, Arizona operates as a full-time satellite of KPNX. The station's signal is also relayed through a network of 14 low-power translators across northern and central Arizona. 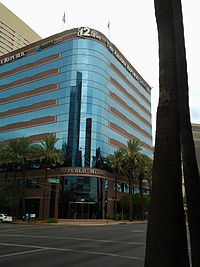 South-west corner of the Republic Media Building in 2013

The station first signed on the air on April 23, 1953, as KTYL-TV; it was originally owned by the Harkins Theatre Group, which also owned KTYL radio (1490 AM, now KIHP on 1310, and 104.7 FM, now KZZP). The station's original studios were located in the then-small town of Mesa. The station has been Phoenix's NBC affiliate since its sign-on. Previously, all four networks of the day were shoehorned on CBS primary affiliate KPHO-TV (channel 5). Channel 12 carried some programming from the DuMont Television Network (an affiliation that was shared with KPHO) until that network's demise in 1956. During the 1990s, the station retained its NBC affiliation while KPHO, KTVK, KSAZ-TV and KNXV all swapped affiliations (ABC from KTVK to KNXV, CBS from KSAZ to KPHO and Fox from KNXV to KSAZ with KTVK becoming an independent station after a nominal affiliation with The WB), ultimately becoming the only major English-language commercial television station in Phoenix to have never changed its primary network affiliation.

John J. Louis, owner of KTAR radio (620 AM), bought channel 12 in 1954 and changed its call letters to KVAR. It would have been KTAR-TV, but at the time Federal Communications Commission (FCC) regulations did not allow a television station to have the same call letters as a sister radio station if they were licensed in different cities. When regulations were loosened in 1961, channel 12 changed its callsign again to KTAR-TV. Soon afterward, the station moved to a new studio on Central Avenue in Phoenix, after the FCC began permitting television stations to operate their studio facilities outside of their city of license. For much of the next half-century, the station identified as "Phoenix/Mesa," even though under FCC regulations it should have identified as "Mesa/Phoenix."

KTAR-TV logo from 1975. Based on the lettering used by NBC News at the time, the "12" logo survived until early 1986, long after the station became KPNX.

Over the years, the Louis family bought several other broadcasting outlets, including WQXI-TV (now WXIA-TV) in Atlanta and WPTA-TV in Fort Wayne, Indiana. Eventually, the Louis family's broadcasting interests became known as Pacific & Southern Broadcasting, headquartered in Phoenix with KTAR-AM-FM-TV as the company's flagship stations. Phoenix advertising mogul Karl Eller bought Pacific & Southern Broadcasting in 1968 and combined it with his existing business to form Combined Communications, which merged with the Gannett Company in 1979, in what was at that time the largest media merger in United States history. Combined's ownership of the KTAR stations had been grandfathered earlier in the decade, when the FCC forbade common ownership of television and radio stations in the same market. However, with the Gannett merger, the KTAR cluster lost its grandfathered protection. Gannett opted to keep channel 12 and sell off the radio stations. The station then changed its callsign to KPNX on June 4, 1979 since the radio properties had held the KTAR call letters first (the change was made due to an FCC rule in effect then that prohibited TV and stations in the same city, but with different owners from sharing the same call letters).

In 2000, Gannett merged with Central Newspapers, owner of The Arizona Republic. As the FCC at the time prohibited the common ownership of newspapers and television stations in the same market, Gannett would have been forced to sell off either KPNX or the Republic, however the FCC granted Gannett a "permanent" waiver to keep both media properties. Gannett's ownership of KPNX and the Republic was a factor in their acquisition of the Belo Corporation, owner of KTVK and KASW, in 2013; Belo's Phoenix properties had to be divested with Meredith Corporation and SagamoreHill Broadcasting, respectively, acquiring KTVK and KASW (the latter station was sold to the Nexstar Broadcasting Group in October 2014, then to the E. W. Scripps Company in October 2019). It became a non-issue after Gannett split its publishing and broadcasting outlets.[2]

In January 2011, KPNX left its longtime home on Central Avenue and consolidated its operations with the Republic at the Republic Media Building on East Van Buren Street in downtown Phoenix, with the station's local newscasts broadcasting from a streetside studio.[3] The Central Avenue facility was then significantly renovated and became the Parsons Center for Health and Wellness (in part via a major grant from local business entrepreneur Bob Parsons), the headquarters complex for the Southwest Center for HIV/AIDS.[4]

Around the first week of October 2012, Gannett entered a dispute against Dish Network regarding compensation fees and Dish's AutoHop commercial-skip feature on its Hopper DVRs. Gannett ordered that Dish discontinue AutoHop on the account that it is affecting local advertising revenues for KPNX (and, to a lesser extent, the Republic). Gannett threatened to pull all of its stations (including KPNX) should the skirmish continue beyond October 7 and Dish and Gannett fail to reach an agreement.[5][6] The two parties eventually reached an agreement after extending the deadline for a few hours.[7]

The station's digital signal is multiplexed:

KPNX operates 12 News Weather (formerly 12 News Weather Plus), a 24-hour local weather service, on its 12.2 digital subchannel and on local cable providers. In addition to national forecasts from AccuWeather, it also runs local forecast inserts for the Phoenix area and northern Arizona, provided by the KPNX weather department. Regional weather conditions and forecasts are displayed on an "L-bar" on the left and bottom quadrants of the screen. Originally affiliated with NBC Weather Plus from December 29, 2005 to November 1, 2008, national programming on the subchannel has been provided by The Local AccuWeather Channel since March 2009 (KNXV's former GoAZ.tv subchannel also was affiliated with the service, but that subchannel's format focused on traffic). On January 20, 2015, KPNX launched a 12.3 subchannel with programming from the Justice Network.

In 1997, the FCC allocated UHF channel 36 as KPNX's companion digital channel, construction on the digital transmitter began the following year. KPNX signed on its digital signal in June 2000. KPNX shut down its analog signal, over VHF channel 12, at 10:12 p.m. (during the station's 10 p.m. newscast) on June 12, 2009, the official date in which full-power television stations in the United States transitioned from analog to digital broadcasts under federal mandate. At 10:38 p.m. on that date, the station's digital signal relocated from its pre-transition UHF channel 36 to VHF channel 12.[10][11]

Karl Eller, who owned the company that became Combined Communications, was also one of the original founding owners of the city's first major professional sports team, the NBA's Phoenix Suns. Channel 12 carried Suns games from the team's 1968 inception until the 1980s, when the game telecasts moved to then-independent station KNXV-TV (channel 15). Channel 12 later carried Suns games as part of NBC's broadcast contract with the NBA from 1990 to 2002. This includes the team's 1993 NBA Finals appearance.

Arizona Cardinals games that are part of the NBC Sunday Night Football package air on KPNX, including the team's lone Super Bowl appearance in February 2009 (from 1988 to 1997, all Cardinals home interconference games were aired on channel 12 during NBC's years with the AFC broadcast package). In 2017, KPNX acquired the rights to Cardinals preseason games.[12] KPNX also provided local coverage to Super Bowl XXX, which was hosted at Sun Devil Stadium in Tempe, and Super Bowl XLIX, which was hosted at University of Phoenix Stadium in Glendale. Other local events carried by Channel 12 include Arizona Coyotes contests selected for NHL on NBC broadcasts, and the PGA Tour's Phoenix Open in years when CBS has the rights to the Super Bowl. 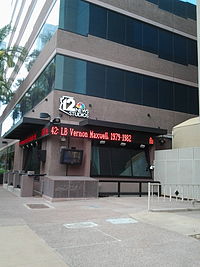 KPNX/12 News Studios located on the south-east corner of the Republic Media Building in 2013.

KPNX presently broadcasts 29 hours of locally produced newscasts each week (with 4½ hours each weekday, 3½ hours on Saturdays and three hours on Sundays). For nearly four decades, the station had placed third in the Nielsen ratings for many years behind ABC affiliate KTVK (channel 3) and CBS affiliate KTSP (channel 10, now Fox owned-and-operated station KSAZ-TV). That soon changed in December 1994, when four of the major English-language commercial stations in Phoenix all changed their network affiliations. Coupled with a resurgent NBC, KPNX surged past KTVK to the top of the ratings, where it has remained ever since, only wavering as NBC experienced its own ratings troubles from 2004 to 2014. KPNX's newscasts are among the highest-rated local newscasts in Arizona during evening timeslots,[citation needed] with newscasts during that time period having dominated ratings for several years, particularly since the 1994 affiliation switches.

KTAR-TV was the Phoenix pioneer of the so-called "happy talk" news format when it reformatted its newscasts under the Action News format in late 1973, with longtime anchor Ray Thompson paired alongside Bob Hughes, weatherman Dewey Hopper (most recently with Air America Radio affiliate KPHX, and a longtime weather forecaster in Sacramento) and sportscaster Ted Brown.

On March 1, 2009, KPNX began to share a news helicopter operated by Helicopters Inc., as part of a Local News Service agreement with KPHO-TV and KTVK; the helicopter is named "News Chopper 20", as a combination of the over-the-air virtual channel numbers of the three stations (3, 5 and 12).[13][14][15] In November 2009, KPNX's newscasts were beaten by KPHO in the ratings at 10 p.m., ending 50 consecutive sweeps victories in the timeslot (dating back to 1996) as the latter's ratings increased due to CBS' strong primetime lineup. KPNX, traditionally known as a very news-intensive station, went through a period of transition when nearly all of its tenured reporters left.

Elizabeth Ashley portrayed fictional Channel 12 station owner Sharon Allan in the 1978 made-for-television disaster movie A Fire in the Sky (at the time of the movie's release, November 26, 1978,[19] KPNX was still using the KTAR-TV callsign).

Tegna only owns the Prescott, Payson and Globe translators. The ones in Mohave County are owned by the county, and the remaining two are owned by local TV clubs.