Eureka Springs is a city in Carroll County, Arkansas, United States, and one of two county seats for the county.[4] It is located in the Ozarks of northwest Arkansas. As of the 2010 census, the city population was 2,073.[2]

The entire city is on the National Register of Historic Places as the Eureka Springs Historic District. Eureka Springs has been selected as one of America's Distinctive Destinations by the National Trust for Historic Preservation. Eureka Springs was originally called "The Magic City" and later the "Stairstep Town" because of its mountainous terrain and the winding, up-and-down paths of its streets and walkways.

It is a tourist destination for its unique character as a Victorian resort village. The city has steep winding streets filled with Victorian-style cottages and manors. The historic commercial downtown of the city has an extensive streetscape of well-preserved Victorian buildings. The buildings are primarily constructed of local stone, built along streets that curve around the hills and rise and fall with the topography in a five-mile long loop. Some buildings have street-level entrances on more than one floor. The streets wind around the town, and no two intersect at a 90 degree angle; there are no traffic lights.

The European Americans also believed that the springs had healing powers. After the Europeans arrived, they described the waters of the springs as having magical powers. Dr. Alvah Jackson was credited in American history with locating the spring, and in 1856 claimed that the waters of Basin Spring had cured his eye ailments. Dr. Jackson established a hospital in a local cave during the Civil War and used the waters from Basin Spring to treat his patients. After the war, Jackson marketed the spring waters as "Dr. Jackson's Eye Water".[citation needed]

In 1879 Judge J.B. Saunders, a friend of Jackson, claimed that his crippling disease was cured by the spring waters. Saunders started promoting Eureka Springs to friends and family members across the state and created a boomtown. Within a period of little more than one year, the city expanded from a rural spa village to a major city. Within a short time in the late 19th century, Eureka Springs developed as a flourishing city, spa and tourist destination.

On February 14, 1880, Eureka Springs was incorporated as a city. Thousands of visitors came to the springs based on Saunders' promotion and covered the area with tents and shanties. In 1881, Eureka Springs enjoyed the status of Arkansas's fourth-largest city, and by 1889 it had become the second largest city, behind Little Rock.

After his term as a Reconstruction governor, Powell Clayton moved to the heavily Unionist Eureka Springs and began promoting the city and its commercial interests. Clayton promoted the town as a retirement community for the wealthy. Eureka Springs soon became known for gracious living and a wealthy lifestyle.

In 1882, the Eureka Improvement Company was formed to attract a railroad to the city. With the completion of the railroad, Eureka Springs established itself as a vacation resort. In only two years, thousands of homes and commercial enterprises were constructed. The Crescent Hotel was built in 1886 and the Basin Park Hotel in 1905. These many Victorian buildings have been well preserved, forming a coherent streetscape that has been recognized for its quality. In 1892, the New Orleans Hotel and Spa was built along Spring Street and is now operating as an all-suite hotel full of Victorian furniture and art.[citation needed]

The Ozarka Water Company was later formed in Eureka Springs in 1905. Carrie Nation moved there towards the end of her life, founding Hatchet Hall on Steele Street. The building was later operated as a museum, but is now closed.

The only bank robbery to occur in Eureka Springs was on September 27, 1922, when five outlaws from Oklahoma tried to rob the First National Bank. Three of the men were killed and the other two wounded.

Opera in the Ozarks at Inspiration Point was founded in 1950. The organization continues to present an annual summer opera festival in Eureka Springs.

In 1964 Gerald L. K. Smith began building a religious theme park called "Sacred Projects" that was proposed to include a life size recreation of Jerusalem. The project never fully developed but two of the components are major city-defining projects today—the seven-story Christ of the Ozarks statue designed by Emmet Sullivan and the nearby The Great Passion Play performed during the summer. It is regularly performed from May through October by a cast of 170 actors and dozens of live animals.[5] It has been seen by an estimated 7.7 million people, which makes it the largest-attended outdoor drama in the United States, according to the Institute of Outdoor Theatre of the University of East Carolina at Greenville, North Carolina.[5] Christian-themed attractions have been added in association with the drama production. These include a New Holy Land Tour, featuring a full-scale re-creation of the Tabernacle in the Wilderness; a section of the Berlin Wall; and a Bible Museum featuring more than 6,000 Bibles. (Items include an original 1611 King James Bible, a leaf from a Gutenberg Bible, and the only Bible signed by all of the original founders of the Gideons.)

Architect E. Fay Jones designed Thorncrown Chapel in 1980, and it was selected for the "Twenty-five Year Award" by the American Institute of Architects in 2006. The award recognizes structures that have had significant influence on the profession. The chapel was listed on the National Register of Historic Places in 2000 because of the special nature and quality of its architecture.

On May 10, 2014, Eureka Springs became the first city in Arkansas to issue marriage licenses to same-sex couples. On May 12, 2015, Eureka Springs passed a Non-Discrimination Ordinance (Ord. 2223), with voters choosing 579 for to 261 against. [6] It became the first city in Arkansas to have such a law to cover LGBT residents and tourists. But a state law intended to invalidate the anti-discrimination ordinance went into effect July 22, 2015. [7] This Intrastate Commerce Improvement Act, sponsored by state senator Bart Hester, “prohibits cities from passing civil rights ordinances that extend protections beyond those already afforded by state law." In response, the town's mayor stated that they would be "prepared to defend their ordinance in court.” [8]

Eureka Springs is located in western Carroll County. The center of the city is in a narrow valley at the headwaters of Leatherwood Creek, a north-flowing tributary of the White River. Houses and streets climb both sides of the valley to the surrounding ridgecrests. U.S. Route 62 runs along a ridgecrest through the southern part of the city and leads east 11 miles (18 km) to Berryville and west 34 miles (55 km) to Rogers. Arkansas Highway 23 is Main Street through the center of Eureka Springs and leads north 11 miles (18 km) to the Missouri state line.

The city was founded when the springs at this location were more evident. Over-extraction of water from the springs has greatly diminished their flow rates. All of the more than 140 springs in the town are cold-water springs.[9]

The climate in this area is characterized by hot, humid summers and generally mild to cool winters. According to the Köppen Climate Classification system, Eureka Springs has a humid subtropical climate, abbreviated "Cfa" on climate maps.[10]

There were 1,119 households, of which 19.2% had children under the age of 18 living with them, 37.4% were married couples living together, 10.9% had a female householder with no husband present, and 49.1% were classified as non-families by the United States Census Bureau. Of 1,119 households, 250 were unmarried partner households: 50 heterosexual, 110 same-sex male, and 90 same-sex female households. 41.0% of all households were made up of individuals, and 13.4% had someone living alone who was 65 years of age or older. The average household size was 1.97 and the average family size was 2.64.

The community is supported by comprehensive public education from the Eureka Springs School District and its facilities:

Private school education is provided at:

View of Eureka Springs from atop an observation tower; the Crescent Hotel is visible on the horizon (2008)

Eureka Springs hosts a variety of events throughout the year.

May Festival of the Arts is an annual month-long celebration of the arts in Eureka Springs. Events include the ArtRageous Parade, White Street Walk, Gallery Strolls, Taste of Art: A Visual Feast at local restaurants, Bank on Art at local banks, artist receptions, special events and exhibits, and much free music in Basin Park. 2013 marked the opening of the Eureka Springs Music Park: an interactive sound sculpture experience, in the North Main Park.

The Eureka Springs Food & Wine Festival is an annual fall event featuring fine cuisine and international wines. The 2012 event was November 8 to 11.

The Eureka Gras Mardi Gras Extravaganza[16] was introduced in 2006 to kick off the Event Season with a New Orleans-style Mardi Gras celebration, complete with parades, floats, and masquerade balls. King's Day, in January, begins the celebration, which ends on the day of Mardi Gras, in February or March.

Eureka Springs holds an annual Halloween Festival. The town is already famous for its haunted houses and public buildings, its ghost tours, a Halloween extravaganza in the cemetery, "Voices from the Past" (in which live actors portray the dead of Eureka), and for a variety of ghostly phenomena.

There are four annual gay and lesbian events called "Diversity Weekends" which are held on the first weekend of April, August and November, along with a week long PRIDE celebration in June. The city also holds an annual UFO conference and several auto shows, including a Ford Mustang show in April, a Corvette show during the first weekend in October, and a Volkswagen show held in August.

For over-the-air television, Eureka Springs is served by the market based out of Springfield, Missouri. For cable, the Springfield affiliates can be received as well as a couple of stations in Fayetteville/Fort Smith as well as all four Little Rock stations. The local radio station is KESA.

The film Pass the Ammo was filmed in the city, with the Auditorium featured in several scenes. There are burn marks still visible on the Auditorium from the film's special effects. The movie Chrystal was filmed in Eureka Springs. Parts of the movie Elizabethtown were filmed in Eureka Springs. The 1982 miniseries The Blue and the Gray was filmed around the area. The SciFi Channel's reality series Ghost Hunters investigated the Crescent Hotel during episode 13 of the second season and found that the claims of ghosts in the hotel are true.

The 2018 documentary The Gospel of Eureka depicts the town and its unique culture, including the synergy of its religious and LGBTQ milieus.[18] 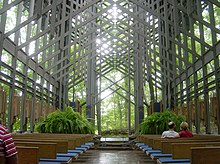 In the late 19th century railroad service reached Eureka Springs via the Eureka Springs Railway, whose chief promoter was the former Governor Powell Clayton. From 1906 to 1946, Eureka Springs was a point on the defunct Missouri and North Arkansas Railroad, which provided passenger and freight service northward to Joplin, Missouri, and southeastward to Helena, Arkansas.[19]

Non-residents who died or were captured in Eureka Springs[edit]