The drug policy of Portugal, informally called the "drug strategy", was put in place in 2000, and came into effect in July 2001. Its purpose was to reduce the number of new HIV/AIDS cases in the country, as it was estimated around half of new cases came from injection drug use.

The policy consisted of multiple methods to reduce the spread of HIV, among which were harm reduction efforts, information to the public and in particular to populations most at risk about how HIV is spread, establishing treatment facilities and easier access to substitution treatment for drug addicts, establishing so-called dissuasion commissions to persuade drug addicts to go into treatment, and all drug treatment and control units were reorganized into one comprehensive unit. In addition, the existing practice of giving drug addicts a waiver for drug possession was codified in a new law. The law (Drug Law 30/2000) maintained the status of illegality for using or possessing any drug for personal use without authorization. However, for persons addicted to said drug, their case was now deemed an administrative offence.[1] The authority to impose penalties or sanctions in these cases was transferred from the police and justice system to so-called dissuasion commissions if the amount possessed was no more than a ten-day supply of that substance.[2][1]

In 1999, Portugal had the highest rate of HIV amongst injecting drug users in the European Union. There were 2,000 new cases a year, in a country of 10 million people. In 1997, 45% of HIV reported AIDS cases recorded originated among IV drug users,[3] so targeting drug use was seen as an effective avenue of HIV prevention. The number of heroin users was estimated to be between 50,000 and 100,000 at the end of the 1990s.[4] This led to the adoption of The National Strategy for the Fight Against Drugs in 1999. A vast expansion of harm reduction efforts, doubling the investment of public funds in drug treatment and drug prevention services, and changing the legal framework dealing with minor drug offences were the main elements of the policy thrust.

According to Dr João Castel-Branco Goulão, one of the architects of the decriminalisation policy, a reason why the programme was able to get off the ground was because in Portugal, the problem could not be blamed on any ethnic or economic group in society (as in Brazil and the favelas), allowing other prejudices to be put aside. The policy was, however, initially opposed by right-wing politicians, who feared it would turn Portugal into a narco-state.[5]

The needle exchange programme, "Say NO! to a used syringe", is a nationwide syringe exchange program which has been ongoing since October 1993, involving some 2,500 pharmacies throughout Portugal. It is run by the National Commission for the Fight against AIDS - set up by the Ministry of Health and the National Association of Pharmacies - a non-governmental organisation representing the majority of Portuguese pharmacies. All drug users can exchange used syringes at pharmacy counters across the country. They get a kit with clean needle syringes, a condom, rubbing alcohol and a written message motivating for AIDS prevention and addiction treatment. From 1994 to 1999, pharmacies delivered around three million syringes annually.[6]

Several low threshold projects were initiated after 1999, particularly in the period 2003-2005, where outreach teams have promoted safe injection practices and supplied needles and injecting equipment on the street. Many of these projects are still running.

At programme start, a media campaign was launched by television, radio and the press, and posters were put up in discothèques and bars in order to attract the attention of the target population to the problems associated with drug addiction, in particular HIV transmission through needle-sharing.[7]

Project objectives have been threefold: To reduce frequency of sharing needles and syringes, to change other IDU (Intravenous Drug User) behaviors that create negative attitudes among the population in general, and to change attitudes towards IDUs in the general population to facilitate addiction prevention and treatment.[8]

In 1987, the Centro das Taipas in Lisbon was created, an institution specialising in the treatment of drug addicts. This centre consisted of a consultation service, a day centre and a patient detoxification unit. This facility was the responsibility of the Ministry of Health, and was the first in the network of centres specialising in treating drug addiction which now covers the whole country.

Healthcare for drug users in Portugal is organised mainly through the public network services of treatment for illicit substance dependence, under the Institute on Drugs and Drug Addiction, and the Ministry of Health. In addition to public services, certification and protocols between NGOs and other public or private treatment services ensure a wide access to quality-controlled services encompassing several treatment modalities. The public services provided are free of charge and accessible to all drug users who seek treatment.

There are 73 specialised treatment facilities (public and certified private therapeutic communities), 14 detoxification units, 70 public outpatient facilities and 13 accredited day centres. Portugal is divided into 18 districts. There is full coverage of drug outpatient treatment across all but four districts (districts not covered are located in the north of the country: Viana do Castelo, Bragança, Viseu and Guarda).

Substitution treatment is today widely available in Portugal, through public services such as specialized treatment centers, health centers, hospitals and pharmacies as well as NGOs and non-profit organizations.

The Portuguese substitution program started in 1977 in Oporto. The CEPD/North (Study Centre on Drug Prevention/North), using methadone as the substituting substance, was the only unit using opioid substitution until 1992. However, the increase in numbers of drug addicts (including an "explosion" at the beginning of the 1990s), together with the growth of AIDS and hepatitis C among this population, led to a change in attitude. After 1992, methadone-substitution programs were extended to several CATs (Centres of Assistance to drug addicts). Overall, the programmes were medium or high threshold. With the exception of occasional activities in a slum area in Lisbon, there were no true low-threshold programs (risk- and harm reduction) prior to 2001.

From 2000 to 2008, the number of people in Portugal receiving substitution treatment increased from 6040 to 25 808 (24 312 in 2007), 75% of whom were in methadone maintenance treatment. The remaining patients received high dosage buprenorphine treatment.

Buprenorphine had been available since 1999, and later also the buprenorphine/naloxone combination.

A national treatment monitoring system is being developed but has not yet been implemented in all regions. National routine statistics from outpatient centres on substitution clients are available (for clients in methadone and buprenorphine programmes).[7]

In July 2001, a new law maintained the status of illegality for using or possessing any drug for personal use without authorization. The offense was changed from a criminal one, with prison as a possible punishment, to an administrative one if the amount possessed was no more than a ten-day supply of that substance.[2] This was in line with the de facto Portuguese drug policy before the reform. Drug addicts were then to be aggressively targeted with therapy or community service rather than fines or waivers.[9] Even if there are no criminal penalties, these changes did not legalize drug use in Portugal. Possession has remained prohibited by Portuguese law, and criminal penalties are still applied to drug growers, dealers and traffickers.[10][11] Despite this, the law was still associated with a nearly 50% decrease in convictions and imprisonments of drug traffickers from 2001 to 2015.[12]

Individuals found in possession of small quantities of drugs are issued summons. The drugs are confiscated, and the suspect is interviewed by a "Commission for the Dissuasion of Drug Addiction" (Comissões para a Dissuasão da Toxicodependência – CDT). These commissions are made up of three people: A social worker, a psychiatrist, and an attorney.[11][13] The dissuasion commission have powers comparable to an arbitration committee, but restricted to cases involving drug use or possession of small amounts of drugs. There is one CDT in each of Portugal's 18 districts.

The committees have a broad range of sanctions available to them when ruling on the drug use offence. These include:

If the person is addicted to drugs, they may be admitted to a drug rehabilitation facility or be given community service, if the dissuasion committee finds that this better serves the purpose of keeping the offender out of trouble. The committee cannot mandate compulsory treatment, although its orientation is to induce addicts to enter and remain in treatment. The committee has the explicit power to suspend sanctions conditional upon voluntary entry into treatment. If the offender is not addicted to drugs, or unwilling to submit to treatment or community service, he or she may be given a fine.[2][14][15][16]

Every year, Portuguese law enforcement bodies confiscate several tonnes of cocaine, with a record amount of more than 34.5 tonnes seized in 2006. A regular increase in quantities of cannabis resin seized could also be observed over recent years, though there has been a recent decline between 2008 (61 tonnes) and 2009 (23 tonnes).[2]

There is little reliable information about drug use, injecting behaviour or addiction treatment in Portugal before 2001, when general population surveys commenced. Until then, there were the indicators on lifetime prevalence amongst youth, collected as part of the European School Survey Project on Alcohol and Other Drugs (ESPAD), and some other (less reliable) data available through the EMCDDA.[16]

Thorough studies on how the various efforts have been implemented were not conducted. Thus, a causal effect between strategy efforts and these developments cannot be firmly established.[10] There are, however, statistical indicators that suggest the following correlations between the drug strategy and the following developments, from July 2001 up to 2007:

Legal status of cannabis in Portugal[edit]

In Portugal, recreational use of cannabis is forbidden by law. In July 2018, legislation was signed into law to allow for the medical use of cannabis in Portugal and its dispensation at pharmacies. Portugal signed all the UN conventions on narcotics and psychotropic to date. With the 2001 decriminalization bill, the consumer is now regarded as a patient and not as a criminal (having the amount usually used for ten days of personal use is not a punishable crime) but repression persists. One can be sent to a dissuasion committee and have a talk or must pay a fee. According to the libertarian think tank Cato Institute, illegal drug use among Portuguese teenagers declined after 2001, and 45 percent of the country's heroin addicts sought medical treatment. But critics of the policy, such as the Association for a Drug-Free Portugal, say overall consumption of drugs in the country has actually risen by 4.2 percent since 2001 and claim the benefits of decriminalization are being "over-egged".[citation needed] 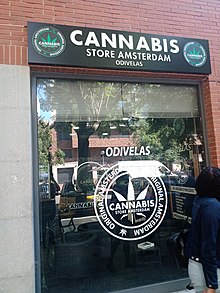 Cannabis Store Amesterdam in Odivelas, Lisbon Metropolitan Area: Cannabis cultivation by ordinary people is illegal in Portugal even when performed for small-scale self-consumption at home. By the early 2020s, cannabis shops became popular in the country but were only allowed to sell cannabis products without THC.

The cultivation of cannabis, even on a very small-scale home grown basis for personal use only, can legally be prosecuted. However, an unknown number of enthusiasts of small-scale home-cultivation grow the plants with a high degree of secrecy due to the legal punishment they could face if prosecuted, and due to potential social stigma as well. In neighboring Spain, small-scale cultivation of cannabis plants for personal use only, is tolerated by the authorities and there are many grow shops across the country selling their products physically and online. In 2003 another update to the "Portuguese drugs law" brought the criminalization of the possession of cannabis seeds, except certified industrial hemp seed. This law made the buying of cannabis seeds from legal and financially transparent online cannabis seed shops based in other European Union member states, such as neighboring Spain or the Netherlands, an unlawful transaction when performed by Portuguese residents. The provision of seeds and tools to produce and consume cannabis is also illegal in the country. Production and distribution of hemp products is legal but regulated. There are a small number of hemp shops in Portugal and hemp products are legal.