David Yutaka Ige (/ˈiːɡeɪ/; Japanese: 伊芸 豊 or いげ ゆたか, born January 15, 1957) is an American politician serving as the eighth governor of Hawaii. A Democrat, he previously served in the Hawaii State Senate. In the 2014 gubernatorial election, he defeated incumbent Governor Neil Abercrombie in the Democratic primary, and won the general election over Republican nominee Duke Aiona. He was reelected in 2018.

Ige was born and raised in Pearl City, Hawaii, the fifth of six sons of Tokio and Tsurue Ige, who are of Okinawan descent.[1] During World War II, Tokio served in the 100th Battalion/442nd Infantry Regimental Combat Team[2] and was awarded the Purple Heart and Bronze Star. After the war, Tokio Ige worked as an ironworker on construction projects while Tsurue Ige worked as a nurse and dental hygienist. Tokio Ige died in 2005 at age 86. Tsurue, now retired, resides in Pearl City.

David Ige attended public schools in Pearl City—Pearl City Elementary School, Highlands Intermediate School, and Pearl City High School—and participated in community sports, playing in the Pearl City Little League for eight years. At the newly built Pearl City High School, Ige excelled in many activities. In his junior year he was elected student body vice president, and he served as senior class president the next year. His campaign for student body president stressed diversity and an end to bullying. Ige also led his varsity tennis team to a championship and was honored as the "Scholar-Athlete of the Year." He graduated fifth in his class of more than 500 students in 1975.[3]

Ige was accepted by the Massachusetts Institute of Technology, but attended the University of Hawaii at Manoa, where he earned a Bachelor of Science degree in electrical engineering. At UH he served as student body secretary and an officer of several honor societies as well as treasurer and vice-president of his fraternity, Phi Delta Sigma.

Ige met his wife, Dawn, at the University of Hawaii. They have three children: Lauren, Amy, and Matthew.

After college, while working for GTE Hawaiian Tel, Ige took graduate courses at UH and earned a Master of Business Administration degree in decisions sciences. In 1986 Hawaii Business Magazine named him one of the university's Top 10 MBA students.

Before being elected governor of Hawaii, Ige served as project manager with Robert A. Ige and Associates, Inc., Vice President of engineering at NetEnterprise, and senior principal engineer at Pihana Pacific, which established the first world-class data center and carrier-neutral Internet exchange in Hawaii and the Pacific. Before that, he worked as an engineer for GTE Hawaiian Tel for more than 18 years.

Ige was originally appointed to the Hawaii House of Representatives on December 2, 1985, by Governor George Ariyoshi after Representative Arnold Morgado resigned to run for a seat on the Honolulu City Council.[4][5] He served in the Hawaii State Senate from 1995 to 2015.[6] During his legislative career, Ige served as chair of nine different committees.[7] He focused much of his career as a legislator on information and telecommunications policy,[7] and co-authoried the Hawaii Telecommunications and Information Industries Act that established the state information network and created the Hawaii Information Network Corporation. Ige was at the center of Hawaii's efforts to diversify its economy. He was responsible for establishing seed capital and venture capital programs, software development initiatives, and technology transfer programs.

Ige was reelected to the Hawaii State Senate in 2012, defeating Republican challenger and former U.S. Naval Air crewman, Army Captain, and small business executive Mike Greco.[8] Greco was the first challenger Ige faced in a general election in over a decade.[9]

Ige ran against incumbent Neil Abercrombie in the Democratic primary for the 2014 gubernatorial election, after Abercrombie upset the supporters of late US senator Daniel Inouye by ignoring his wish to be replaced by Colleen Hanabusa.[6][10] Though outspent in the race, Ige defeated Abercrombie, 66% to 31%.[11][12][13] Ige's victory made him the first candidate to ever defeat an incumbent governor of Hawaii in a primary election.[14]

Inauguration of David Ige as 8th Governor of Hawaii

Ige was sworn in as the eighth governor of Hawaii on December 1, 2014, with Lieutenant Governor Shan Tsutsui, in the Hawaii State Capitol Rotunda.[16] Ige is the first person of Okinawan descent to be elected governor of a U.S. state.[17]

Governor Ige's inauguration theme of "honoring the past and charting a new tomorrow" was on display throughout the ceremony, which paid tribute to his father who served in the 100th Battalion, 442nd Regimental Combat Team of the U.S. Army during World War II alongside the late U.S. Senator Daniel Inouye.[16]

Governor Ige with U.S. Navy admiral John Richardson at the 75th Commemoration Event of the attacks on Pearl Harbor and Oahu, 2016 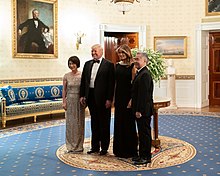 In October 2015 Ige declared a state of emergency due to the escalating scale of the homelessness problem; in 2015 Hawaii had the highest rate of homeless persons per capita in the United States.[18] In June 2017, following President Donald Trump's decision to withdraw the United States from the Paris Agreement on climate change, Ige signed two bills that respectively committed the state to meeting regardless its greenhouse gas emission targets under the Paris Agreement and established a carbon reduction and soil health task force.[19]

After an incoming missile alert was erroneously sent to all smartphones in the state and broadcast over local television and radio on January 13, 2018, Ige apologized for the mistake,[20] which he attributed to human error during a shift change at the Hawaii Emergency Management Agency. He pledged to reevaluate the state's emergency procedures to prevent a recurrence of the false alert, which caused widespread panic and confusion in the state.[21]

On February 22, 2019, President Trump appointed Ige to the bipartisan Council of Governors, on which Ige will serve as co-chair.[22]

Ige has allowed the Thirty Meter Telescope to be built on Mauna Kea. Some protesters have called for his impeachment because of this. On July 18, 2019, an online petition titled "Impeach Governor David Ige" was posted to Change.org.[23]