Christopher Thomas Sununu (/səˈnuːnuː/ sə-NOO-noo; born November 5, 1974) is an American politician and engineer who has served as the 82nd governor of New Hampshire since 2017. A member of the Republican Party, Sununu was a member of the New Hampshire Executive Council from 2011 to 2017.

Sununu earned a bachelor's degree in civil and environmental engineering from the Massachusetts Institute of Technology. He has served as chief executive officer of the Waterville Valley Resort in New Hampshire. Sununu is a son of former New Hampshire Governor and White House Chief of Staff John H. Sununu, and a younger brother of former U.S. Representative and Senator John E. Sununu.

In January 2021, Sununu began his third term as governor of New Hampshire, one term short of the modern record of four served by John Lynch from 2005 to 2013.

Sununu is one of eight siblings,[5] including older brother John E. Sununu, a former U.S. Senator and U.S. Representative.[5] He was born and raised in Salem, New Hampshire.[6]

His father's paternal ancestors came to the United States from the Middle East around the start of the 20th century, while his paternal grandmother was born in El Salvador to a family of Greek Orthodox Christian Lebanese people who had settled in Central America at the turn of the century. His father's paternal ancestry is Lebanese and Palestinian from the Greek Orthodox communities in Jerusalem. Despite the family's emigration from Jerusalem, some members of the family were from Beirut. His father, John, was born in Havana, Cuba. His paternal grandfather, also named John, was born in the United States, and most of the last two generations of Sununus were also born in the U.S.[7] His mother, Nancy (née Hayes), is descended from emigrants from Ireland, Scotland and England.[citation needed] When he took office as governor, Sununu was sworn in with a Greek Orthodox New Testament Bible belonging to his family.[8]

Sununu graduated from Thomas Jefferson High School for Science and Technology, in Fairfax County, Virginia, in 1993.[9] He graduated from the Massachusetts Institute of Technology with a B.S. in civil/environmental engineering in 1998.[10]

For ten years,[when?] Sununu worked as an environmental engineer designing systems and solutions for cleaning up waste sites[11] under the supervision of licensed engineers.[12] He specialized in soil and groundwater remediation, wastewater treatment plants, and landfill designs.[11] In 2002, he became an "engineer in training" in California.[12]

From 2006 to 2010, Sununu was an owner and director of Sununu Enterprises, a family business and strategic consulting group in Exeter, New Hampshire. It focuses on local, national and international real estate development, venture technologies and business acquisitions.[citation needed]

In 2010, Sununu led a group of investors in the buyout of Waterville Valley Resort, where he worked as Chief Executive Officer, employing over 700 people in the White Mountains region. Sununu led an aggressive expansion effort of the ski resort in cooperation with the United States Forest Service. The resort offers skiing, golf, tennis, mountain biking, and an ice arena.[13]

On December 16, 2015, the Governor's Advisory Commission on the Intermodal Transportation (GACIT) presented the 10-Year Plan for 2017–2026 to the governor of New Hampshire.[15] Sununu, as a voting member of GACIT, helped develop the blueprint, which "aggressively addressed financial constraint, assuming federal funding of about $160 million per year."[16]

In 2010, Sununu joined the other four Executive Council members in voting unanimously to release Ward Bird from his mandatory three- to six-year prison sentence for threatening another person with a gun. The council voted to grant Bird a full pardon. Bird was convicted of brandishing a gun at a woman who trespassed on his posted property in 2008. But Lynch, who had never granted a pardon during his tenure, vetoed the measure, saying the judicial system had given Bird's case a thorough review and he would not undermine it. The council then immediately voted to commute Bird's sentence, and Lynch let that vote stand.[17]

In 2011, Sununu led a series of public hearings to review proposals for Managed Medicaid, a program to help New Hampshire Medicaid recipients to coordinate their health care.[18][failed verification] It also helps Medicaid recipients with chronic diseases like diabetes, asthma, obesity, and mental illness. Through this program, Medicaid recipients have wellness and prevention programs as a part of their Medicaid benefit.[citation needed]

In 2014, a 300-page, $292 million amendment to the state's Medicaid program came before the Executive Council only two hours before the scheduled vote. Republicans Joseph Kenney and Sununu urged Governor Lynch and other Democrats present not to vote for the contract, but lost the vote 3–2, along party lines.[19]

On May 14, 2019, Sununu announced that he would seek a third term as governor, rather than challenging incumbent Democratic Senator Jeanne Shaheen in the 2020 election.[22]

After securing the Republican nomination, he defeated New Hampshire Senate Majority Leader Dan Feltes in the general election, 65.2% to 33.4%,[23] becoming the first candidate in New Hampshire history to earn 500,000 votes.[24]

In 2018, Sununu announced the nationwide launch of his Recovery Friendly Workplace Initiative to engage employers and empower workplaces to provide support for people recovering from substance use disorder. More than 40,000 employees in New Hampshire work for a designated Recovery Friendly Workplace.[citation needed] In October 2018, Sununu introduced the state's new "hub and spoke model" for addiction recovery. The model includes nine regional hubs (in Berlin, Concord, Dover, Hanover, Keene, Laconia, Littleton, Manchester, and Nashua), which coordinate with local "spokes" to provide addiction recovery services. Hubs receive $9 million a year, stemming from $45.8 million in federal aid to combat the state's opioid epidemic.[27] In March 2019, Sununu announced that an additional $12 million had been allocated to New Hampshire to fight the opioid epidemic.[28]

On May 3, 2019, Sununu vetoed a bill that would have repealed the death penalty. He signed the veto at a community center named after Michael Briggs; as drafted, the bill would not have applied to Michael Addison (who killed Briggs in 2006). The veto was overridden.[29]

In November 2020, Sununu instituted a statewide mask mandate,[30] leading to protests outside his house.[31]

During the COVID-19 pandemic, Sununu has criticized both Republicans and Democrats in Washington for a lack of relief packages.[32] He has also criticized members of Congress for getting early access to COVID-19 vaccines.[33]

WMUR considers Sununu a moderate Republican.[34] According to the National Review, he is a "fiscally conservative" and "socially moderate" politician in a similar vein to Rockefeller Republicans.[35] On The Issues, a nonpartisan and nonprofit organization run by Snopes, which tracks politicians' positions, considers Sununu a "Moderate Libertarian Conservative."[2] 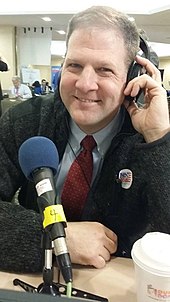 Sununu being interviewed on the Rich Girard radio program, February 2016

Sununu opposes New Hampshire's 5% tax on dividends and interest income.[4] After his 2020 reelection, he called for newly elected Republican majorities in the New Hampshire House and Senate to pass a law phasing out this tax by 2026, saying that it unfairly targets senior citizens living off of these types of income and their retirement accounts.[4] He also sought to slightly reduce other taxes, and to institute student loan relief for those going into health care and social work.[4]

Sununu has supported tax cuts for businesses and a reduction in property taxes.[37] After the 2018 midterm elections, which gave Democrats control of the New Hampshire legislature, Sununu vowed to veto their proposal to create a broader state income tax, as well as several other new taxes and fees. Sununu signed a bill making it easier for medical facilities to be licensed to treat veterans.[38] He also opposed the Senate's Republican health care plan in 2017, citing that the proposal would negatively affect Medicaid and addiction recovery services in the state.[39]

Sununu supports legislation to provide state-funded "school choice vouchers to disadvantaged and low-income students"; such vouchers could be used at religious and private schools.[40] After the 2018 midterm elections, in which Democrats regained control of the New Hampshire legislature, Sununu vetoed a bill to establish a paid family leave policy that would have instituted a statewide payroll tax.[41]

Sununu nominated 27 New Hampshire "opportunity zones" to receive federal tax breaks for low-income areas.[42][43] These included Waterville Valley, a low-income town that is the locale of the Sununu family's Waterville Valley Resorts. The family and resort did not take advantage of the tax breaks but later expanded their investment in the resort, allowing them to, if they later pursued the tax advantages, "defer paying taxes on those gains for seven years and get a 15% discount on the tax liability. In addition, they could avoid paying taxes on any future capital gains from the resort if they hold on to it for a decade".[44]

In late June 2018 and again on June 4, 2019, Sununu vetoed New Hampshire Senate Bill 446, which would have increased the limit for renewable energy projects participating in net metering from 1 megawatt (MW) to 5 MW. A veto override vote held in 2018 by the New Hampshire House of Representatives failed to achieve a two-thirds majority.[45]

In a statement about his veto of Senate Bill 446 (and a separate bill, Senate Bill 365), Sununu said the bills would collectively cost New Hampshire electric ratepayers (consumers) around $100 million over three years. "While I agree that expanding net metering could be a benefit to our state, Senate Bill 446 would cost ratepayers at least $5 to $10 million annually and is a handout to large-scale energy developers", Sununu said. "These immense projects should use incentives already available and compete on their own merits."[45][46]

In his 2020 budget address, Sununu proposed the creation of the New Hampshire Department of Energy, which he said will "streamline government" and "eliminate redundancies."[47] According to Sununu, "The Department will combine many of the current functions of the Public Utilities Commission with the Office of Strategic Initiatives and ensures that a unified approach to energy policy, while keeping core regulatory functions separate from the programmatic and policy elements."[47] One focus of the Department will be the development of offshore wind along New Hampshire's shoreline in the Gulf of Maine, a longstanding priority of Sununu's.[48]

Sununu has said that he does not oppose abortion rights, but does not support taxpayer funding for abortions and supports a ban on partial-birth abortion.[49] In 2015, as a member of the New Hampshire Executive Council, he voted to defund Planned Parenthood.[50] He later reversed his position and voted to restore the funding.[51] In 2018, he said "I'm pro-choice. I support Roe v. Wade."[52] Sununu had supported other contracts with Planned Parenthood.[53]

Sununu vetoed a bill that would ban people from carrying firearms on school playgrounds.[54]

Sununu said he would refuse to send the National Guard to the border to enforce Trump's "zero-tolerance" policy in regard to undocumented immigrants.[55] During a 2016 gubernatorial debate, he said he opposed the settling of 10,000 Syrian refugees in the United States.[56]

Sununu is seen as supportive of LGBT rights; he said that he does not get involved with the state's GOP platform issues and spoke at an event for the Log Cabin Republicans, a political action committee that supports same-sex marriage and other gay rights.[57] In 2018, Sununu signed into law two bills intended to protect LGBT rights, one prohibiting discrimination based on gender identity and one banning conversion therapy from being used on minors.[58] In 2019, he allowed a bill to become a law without his signature that created a non-binary gender option for driver's licenses.[59][60]

Sununu opposes legalizing recreational marijuana.[61] In December 2018, he said he would "absolutely" veto legislation "regardless of what the language looks like."[62] In 2020, Sununu joined Democrats in supporting permanent funding for conservation efforts in the U.S., and particularly in New Hampshire.[63]

After the release of LEACT's initial recommendations, Sununu said, "As I have long said, New Hampshire has some of the best law enforcement in the country, but there is always room to improve, grow, and adapt."[66]

In 1998, Chris Sununu completed a five-month through-hike of the Appalachian Trail from Maine to Georgia.

Sununu is an active skier and rugby player and, in 1998, completed a five-month through-hike of the Appalachian Trail from Maine to Georgia.[67] He lives with wife, Valerie, and their three children in Newfields, New Hampshire.[68]